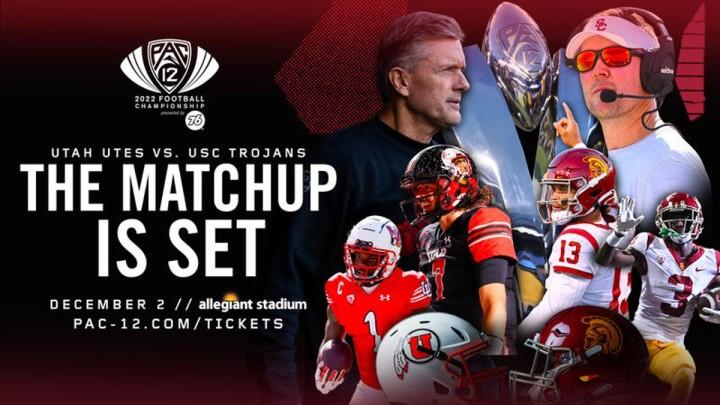 The Pac-12 conference will crown a champion on December 2 when the No. 11 Utah Utes take on the No. 4 USC Trojans. In the school’s previous meeting on October 15, Utah upset USC 43-42, handing the Trojans their only loss on the season. USC will be out for revenge as they look to avenge their lone defeat.

USC is currently ranked fourth in the College Football Playoff (CFP) Rankings, meaning the Trojans would move on to the CFP Semi-finals if the season ended today. If the Trojans defeat the Utes in the Pac-12 Championship, they will most likely earn the right to play in the CFP on December 31. However, Utah is the reigning Pac-12 champion, and with a trip to the Rose Bowl in their grasp, the Utes will not go down without a fight.

The Utah Utes will take on the USC Trojans in the Pac-12 Championship Game at 8 p.m. ET on Friday, December 2. The game will take place at Allegiant Stadium in Las Vegas, Nevada. According to FanDuel, USC is favored to win by 2.5 points.

The Utah Utes come into the contest with an overall record of 9-3 and a conference record of 7-2. Utah finished in a three-way tie with Oregon and Washington for second place in the conference but won the tiebreaker to advance to the championship game. The Utes are coached by Kyle Willingham, the winningest coach in Utah history, with 153 wins in 18 seasons. The Utes are a well-balanced team that ranks in the top 20 in scoring offense and defense.

The USC Trojans enter the Pac-12 championship game with an overall record of 11-1 and a conference record of 8-1. The Trojans have won five straight games as they position themselves to make the CFP with one more victory. First-year coach Lincoln Riley is no stranger to the postseason, as the former Oklahoma head coach led the Sooners to the playoff on three separate occasions. The Trojans are led by their dynamic quarterback, Caleb Williams, who is currently the favorite to win the Heisman trophy.

How can I watch the Pac-12 championship game?

The game between Utah and USC will air on Fox. The announcers will be Jason Benetti, Brock Huard, and Allison Williams.

Watch Utah vs. USC on Fox

How can I get Fox?

Tune into Fox at 8 p.m. ET to watch the broadcast of Utah vs. USC. Fans can stream the game on Foxsports.com by signing in with their cable TV provider.

Fox Sports can also be accessed without cable through a live TV service like fuboTV or Sling TV. Customers can sign up for a free one-week trial of fuboTV, which is a great value, especially with the World Cup being streamed on Fox networks. On the other hand, Sling TV offers an Orange and Blue package that costs $35 per month or $50 if purchased together. Those rates will increase to $40 each or $55 together starting December 3, 2022.