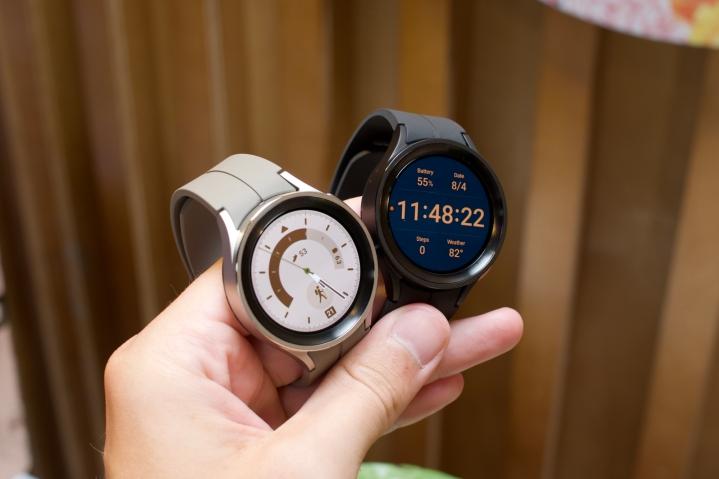 The Galaxy Watch 5 and Watch 5 Pro are Samsung’s latest shots in its ongoing war with Apple over who can release the best smartwatches. Taking the baton from last year’s Galaxy Watch 4 and Galaxy Watch 4 Classic, they add a number of useful refinements, and the Watch 5 Pro, in particular, seeks to please outdoor enthusiasts with its enhanced size, bigger battery, and superior ruggedness.

Both watches will look eye-catching on your wrist, but is the titanium build and expanded size of the Galaxy Watch 5 Pro worth the extra $170? We answer this question by looking at the specs, design, and performance of both devices, determining which is the best overall.

The Samsung Galaxy Watch 5 and Watch 5 Pro bear a family resemblance, but there are important differences. The Watch 5 is more or less a carbon copy of the Watch 4, which is not necessarily a bad thing, given how stylish, modern, and contemporary the Watch 4 is. With the Watch 5 Pro, there’s a similar circular design, yet its 1.4-inch sapphire crystal display is recessed into a more substantial titanium case, weighing over 10 grams more than the 44mm version of the Watch 5. It looks noticeably more substantial than the Watch 5, which may appeal to those who want to make more of a statement.

The Galaxy Watch 5 is available in 40mm and 44mm models, while the Watch 5 Pro is available only as a 45mm model. The 40mm version of the Watch 5 houses a 1.2-inch Super AMOLED display, while its 44mm version — and the Galaxy Watch 5 Pro — houses a 1.4-inch Super AMOLED panel. In other words, you get a high-quality screen regardless of which model you go for, with all models offering a crisp pixel-per-inch count of more than 450.

In terms of durability, the 5 Pro is built with a titanium case, while the Watch 5 is encased in aluminum. This gives it more robustness and ruggedness, although both devices come with the same IP68 and 5ATM water (and dust) resistance ratings, while they’ve also been tested to MIL-STD-810H standards.

When it comes to fitness tracking, both devices are almost identical, save for a couple of subtle — but potentially important — differences. They both feature Samsung’s BioActive Sensor, which has an enlarged surface area in order to increase the accuracy of readings. This means you can monitor such things as sleep, blood-oxygen level, blood pressure, and body fat levels. However, one difference is that the GPS on the Watch 5 Pro has been enhanced with a “GPX” feature that enables users to share their locations, trace back their steps, and see turn-by-turn directions.

This makes the Pro more suited to hikers and long-distance walkers, as does the bigger battery on the watch. Nonetheless, while this gives it a slight edge over the standard Galaxy Watch 5, it isn’t really enough to give it a win in this round.

While previous generations presented buyers with watches with identical battery sizes, the Watch 5 and Watch 5 Pro offer some actual choices. The 40mm version of the Watch 5 contains a 284mAh battery, while the 44mm comes with a 410mAh equivalent. By contrast, the Watch 5 Pro offers a 590mAh cell, something that is designed to keep more serious fitness devotees going for longer. According to Samsung, it’s 60% larger than the battery you can find in the Galaxy Watch 4, with its capacity able to support 20 hours of continuous GPS use.

This isn’t to take away from the battery on the Watch 5, which is 13% bigger than that found on the Watch 4, and which also charges from 0% to 45% in half an hour. Even so, the Watch 5 Pro’s is a powerhouse for a device of its relatively small size, with our review confirming that it can last for three days without recharging under relatively heavy usage. By contrast, our Watch 5 review found that it will struggle to make it through two days unless you use it lightly.

Longtime devotees of the Galaxy Watch may be disappointed to learn that neither the Watch 5 nor the Watch 5 Pro features the rotating bezel of earlier models. This had arguably made navigating and using the Galaxy Watch more intuitive than simply swiping, while it also gave each device a more premium feel. That said, this is an absence affecting both watches, so neither loses points in relation to the other.

As for the special features they actually have, the most notable is probably the comprehensive sleep tracking. Sleep Scores monitor the different stages of sleep and help monitor your patterns, while they can also detect snoring and bloody oxygen levels. This is combined with improved Sleep Coaching that also provides a guided program for improving the quality of your sleep. Also, if you have the right smart devices and use the SmartThings app, both watches can be used to set air conditioners, lights, and TVs in various ways in order to improve your sleep environment.

Aside from this, both watches don’t progress too far beyond the features found on the Watch 4 series, although the Watch 5 Pro has the aforementioned GPX mode. Of course, because this is only for dedicated hikers, it’s arguably not enough to earn the more expensive watch a win in this round.

It’s more durable, more aesthetically striking, and has a bigger battery, so the Samsung Galaxy Watch 5 Pro has just enough going for it to secure an overall victory. The Galaxy Watch 5 is very close to it, though, featuring a similarly excellent screen, great fitness and health-tracking features, good software, and a decent enough battery. However, the bigger battery of the Pro makes it more useful for people who really need an always-on and dependable fitness-tracking watch, which is why it carries the day. Of course, if you’re not a massive fitness person, then the $170 savings offered by the Watch 5 has much to recommend it.