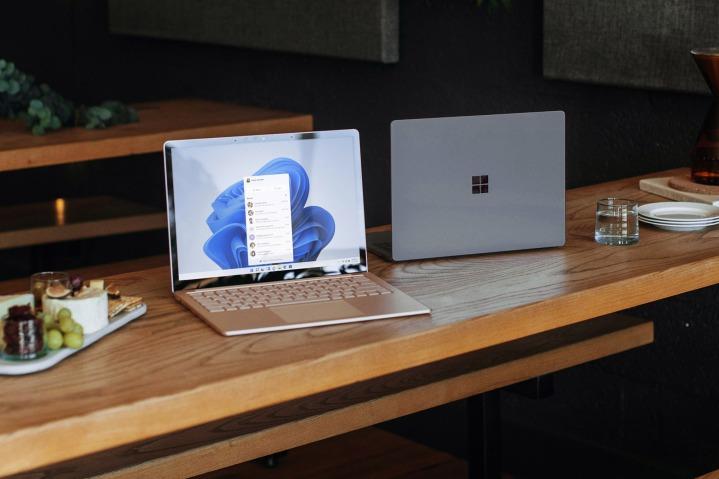 Windows 11 is the newest version of Windows, and it marks a big departure from Windows 10 in terms of design. Under the hood, though, the two operating systems are very similar. We’ve compared Windows 11 and Windows 10 point for point in order to answer one question: Should you upgrade to the latest Windows OS?

If you’re wondering if Windows 11 is any good or if updating to Windows 11 is worth it, this comparison is for you. We’ll run down the biggest differences between Windows 11 and Windows 10, including how the Windows 11 2022 Update changes things.

Although Windows 11 looks like nothing more than a reskin of Windows 10, the operating system packs in a ton of new features. There are relatively small changes, like a new Start menu and Taskbar, as well as some defining features, like support for Android apps on Windows 11.

Windows 11 makes a big visual departure for Microsoft. In the new operating system, Microsoft centers the Taskbar and the Start menu on the screen. This makes it look a bit more like macOS and ChromeOS. However, you can still move it back to the left if you want.

But if you want to pin your Taskbar to the right or the left of the screen, then we have bad news. You can no longer do that natively, as in Windows 11, the Taskbar only stays on the bottom. Paid third-party apps like Start11 can change it if you want, however.

Outside of the main visual change, Windows 11 comes with rounded corners on windows, new app icons, and new Fluent Emojis, which are exclusive to Windows 11. Still, Windows 11 hasn’t seen the 3D emojis Microsoft teased during the initial launch.

There are multiple small feature additions, as well, including live captions for your browser and Focus mode, which allow you to customize notification settings for a set time while you work.

If you’re looking at the differences between Windows 11 and Windows 10, the biggest ones are the Start menu and the Taskbar.

As for the Taskbar, Microsoft has collapsed the search box into an icon and also removed the Cortana functions in Windows 11. Now, you’ll find a dedicated icon for Microsoft Teams in the Taskbar, which is integrated into Windows 11. You’re free to remove the icon if you don’t use Teams, though.

The other big change also involves moving the weather in the Taskbar to the left side of the screen. This was known as News and Interests in Windows 10, but in Windows 11, that gets replaced by Widgets (read our roundup of the best Windows 11 widgets). You’ll still see the weather, but you’ll also see other things like your favorite news, sports scores, traffic, and more.

Windows 11 introduces Virtual Desktops as well, which allow you to maintain separate desktop workspaces for work, gaming, or whatever else you want.

The app stores in Windows 11 and Windows 10 are based on the same design. Yet, Windows 11’s app store brings support for Android apps via the Amazon Appstore. Only select Android apps are supported, so make sure to read our guide on how to install Android apps on Windows 11.

Over Windows 10, Microsoft includes more app types outside of the Universal Windows Platform (UWP) in Windows 11. You still have access to UWP, but now also Win32 apps like Firefox and the Epic Games Store.

If you want the best Windows OS for gaming, Windows 11 is for you. Recent Windows 11 updates included optimizations for running games in windowed mode, and it supports features like Auto HDR and DirectStorage — an upcoming feature that helps games load in less than one second.

Some of these features, like DirectStorage, are available on Windows 10 as well. Microsoft has made it clear that gaming is a big focus for Windows 11, so it’s the better platform for gamers now, especially with some of the performance bugs worked out. PC gamers are updating to Windows 11 in droves, so that’s a good sign.

The multitasking improvements in Windows 11 are exclusive; they aren’t being backported to Windows 10. In Windows 11, you can increase your multitasking and system performance with Snap Layouts that group your windows and save them to the taskbar. This is available in Windows 10, but Windows 11 makes it easier to access Snap Layouts and provides more configurations. Microsoft has updated Snap Layouts with even more functionality since launch, too.

Windows 11 solves a big issue with multi-monitor setups, too. Windows 11 remembers how you had your windows on your external monitor and will save them in that state when you disconnect from a monitor and then plug it back in. This is one of the most annoying problems with Windows 10 that Windows 11 finally addresses.

Windows 10 has a traditional tablet mode that makes your PC go to a full-screen Start menu experience. In Windows 11, this is removed. Instead, Windows 11 behaves more like an iPad, where when you switch your device to a tablet, things become easier to touch. That includes new gestures for opening the Start menu, dismissing windows, and more, none of which are present in Windows 10.

In addition, Windows 11 brings deeper pen functionality. You can still use Whiteboard to collaborate visually, but Windows 11 also brings support for up to four app shortcuts through your pen.

Voice navigation is also improved in Windows 11, allowing you to use your voice to launch apps, enter keyboard and mouse inputs, control the operating system, and basically anything else you could need. In short, Windows 11 allows you to fully control the OS with your voice.

is great if you care about performance. Microsoft talked about the performance benefits and optimizations in Windows 11 in a YouTube video.

According to Microsoft, Windows 11 does a lot of work in memory management to favor the app windows you have open and running in the foreground. This should ensure that they get more CPU power over other system resources. Windows 11 also suspends some data in RAM while your PC sleeps, helping it wake from sleep 25% faster than Windows 10.

Microsoft has added performance improvements since launch, too. In February, Windows 11 received an update that boosted solid-state drive (SSD) speeds, for example.

Windows 11 is snappier than Windows 10, but the differences are small in real-world use. The various optimizations in Windows 11 help it to run faster on weaker laptops, but you’re not giving up a ton of performance with Windows 10.

You can use Windows 11 or Windows 10 for remote work, but Windows 11’s collaboration features are much better. It supports background blur, eye contact adjustments for meetings, and automatic framing — none of which are present on Windows 10.

These AI-powered features are available through Microsoft Teams, though some of them may depend on the hardware you have in your computer.

Should you upgrade to Windows 11?

Being the latest Windows version, Windows 11 is the best choice for most people. However, its new features also bring some limitations that complicate some upgrades, especially on older PCs.

Upgrading to Windows 11 is a simple affair, but you might be apprehensive if you’ve been sitting on Windows 10. As we lay out in our guide on how to install Windows 11, most PCs can upgrade from Windows 10 for free through a simple Windows update. We strongly recommend going this route to avoid malicious Windows 11 installers that can surface in search engines.

Microsoft has completed the Windows 11 rollout, so any PC with supported hardware can upgrade for free. You only have 10 days to downgrade from Windows 11 to Windows 10 after updating. After that, you’ll need to do a clean install (erase all your data) to downgrade. If you’re the technical type, you also can try to dual-boot Windows 10 and Windows 11 with little risk.

Although there are a lot of new features in Windows 11, Microsoft also removed some features that are available in Windows 10. You can no longer sync your desktop wallpaper; Internet Explorer and the Math Input panel are gone; and a few apps are also removed. Those apps are 3D Viewer, OneNote for Windows 10, Paint 3D, and Skype. You can still find those in the store, though. Microsoft has a full list if you’re concerned.

The only hurdles to upgrading are the Windows 11 system requirements. You’ll need a recent processor from Intel 8th-generation or AMD Ryzen 2000 (or newer) processor and support for TPM 2.0 on your system. TPM is basically a hardware security processor in modern PCs. Nearly all desktops and laptops support TPM 2.0, but make sure to check our list of motherboards that support TPM if you built your own PC. Window 10 doesn’t have this restriction on custom PCs.

If your computer is more than 4 years old, there’s a good chance that it’s not supported by Windows 11. That might be the deciding factor between it and Windows 10.

Windows 11 broke from the semi-annual update cadence of Windows 10 in favor of a single annual update. That’s just like macOS. Microsoft is committed to supporting Windows 10 through 2025, and it recently announced that Windows 10 will only get once-a-year updates as well. In addition to the large annual update, Windows 11 sees smaller feature rollouts throughout the year.

The most recent Windows 11 2022 Update sets the pace for how these annual updates will look. It’s feature-packed, especially compared to the slow pace of updates in the Windows 10 era.

This update features everything from small user interface tweaks to the Start menu to entirely new apps like Clipchamp. The accessibility features are a must-have for some, and there are even some important Windows 10 features that have finally made the transition to Windows 11 — such as folders in the Start menu. In a lot of ways, it feels like the version of Windows 11 that should have launched last year.

Windows 11 has seen its fair share of bugs, while the much older Windows 10 is more stable. Microsoft has been quick to fix issues with its latest OS, though. We’ve seen a bug that creates thousands of empty folders in File Explorer, as well as a bug that would massively slow SSD speeds.

At one point, Microsoft recommended against one of its Windows 11 updates, and the OS has seen numerous issues with AMD processors. Microsoft has fixed all of these problems, but it’s safe to assume that Windows 11 will present more bugs than Windows 10, even if Microsoft is quick to address them.

There’s one ongoing Windows 11 problem that relates to memory leaks, however. As we’ve confirmed and tested, Windows 11 could take up extra RAM when you open up multiple instances of File Explorer. It never releases the RAM when you close the File Explorer, and the system takes up extra resources. This isn’t a problem everyone is having, and it’s also been around in Windows 10 for a while, but it’s a notable one — to say the least.

We just covered a few issues from Windows 11 in the past, but there’s a great way to track bugs in Windows 11. Windows users can always report new bugs in the Feedback Hub app. If you sort by New or Top, you’ll see all the little Windows 11 bugs that we can’t possibly put in one post. So, if you really want to see what’s happening there, search through the app on your Windows 10 PC for Windows 11 feedback.

Windows 11 is worth the update for most people. It comes with a wide range of new features, performance improvements, and design changes. As the latest Windows OS, it usually gets more attention than Windows 10, too.

There’s not too much risk in upgrading to Windows 11, either. With some planning, you can easily uninstall Windows 11 and go back to Windows 10. And with the latest update available, it’s never made more sense to give it a shot.