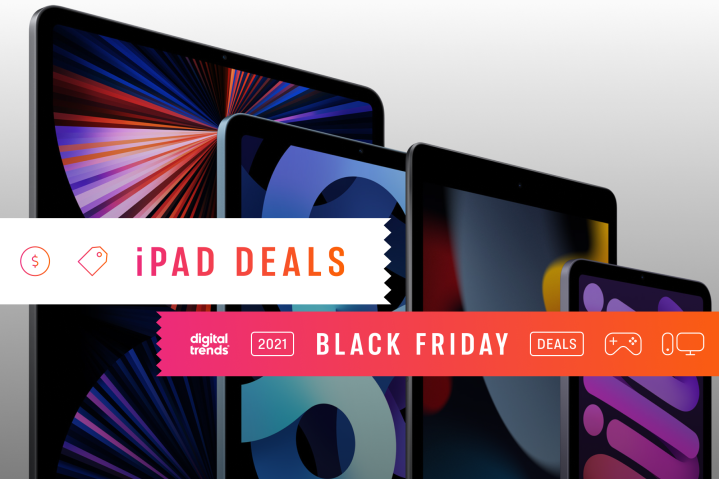 Black Friday 2022 technically isn’t until November 25, but forget about marking your calendars. Most retailers aren’t bothering to wait for the official date. They’re letting people beat the rush on the best Black Friday deals early.

With so many great options already out there, we’ve taken the time to focus on the best Black Friday iPad deals you can shop right now. Below, we’ve rounded up the best deals so you know exactly where to save big today. To help you out further, we’ve also divided things up according to different budgets, appreciating that Apple Black Friday deals cover a wide variety of different needs.

The Apple iPad 10.2 is a reliable option for anyone who doesn’t want to spend too much on one of the best Black Friday tablet deals while still getting all the advantages of an iPad. It has a gorgeous-looking 10.2-inch Retina display that has True Tone support, ensuring its colors pop on screen. Powered by an A13 Bionic chip with Neural Engine, it may not be the fastest iPad around but it’s still more than competent for average iPad usage. 64GB of storage gives you sufficient room for all your favorite apps and games, while it also has an 8MP wide back camera and 12MP Ultra Wide front camera with Center Stage support. The latter is particularly useful when taking video calls as it means you’re always the center of attention. Up to 10 hours of battery life plus support for the Apple Pencil (1st generation) and Smart Keyboard rounds off an attractive bunch of features for anyone looking for the cheapest iPad.

The Apple iPad Mini is best described as a little powerhouse. One of the best iPads around while still being smaller than average makes it great for anyone looking for a portable solution. Its 8.3-inch Liquid Retina display has True Tone and wide color support and it truly looks delightful in everyday use. An A15 Bionic chip with Neural Engine powers proceedings and ensures multitasking works well, while gaming is a viable option, too. Landscape stereo speakers complement the screen so it’s an excellent bet for streaming your favorite shows on the move. Elsewhere, a 12MP wide back camera and 12MP Ultra Wide front camera with Center Stage support helps you keep in touch with the world effectively. There’s also support for Apple Pencil (2nd generation) if you want to sketch out designs or take notes.

The Apple iPad Air is one of the best tablets around and it’s even more alluring when it’s the cellular model. It’s a real powerhouse in every sense of the word. That’s helped by the fact that it uses Apple’s M1 chip which has previously been seen in many MacBooks. Having laptop-level performance within a tablet is a great step for anyone looking for maximum portability. The iPad Air also has a 10.9-inch Liquid Retina display with True Tone and P3 wide color support, all bundled up underneath an antireflective coating so it’s great to use in all conditions. Additional features include stereo landscape speakers to make streaming content or taking calls better. It also has a 12MP wide camera plus 12MP Ultra Wide front camera with Center Stage support so it’s great for work or fun video calls. It’s pretty much all you could ever need from a tablet, being slim, lightweight, yet powerful for both work and pleasure.