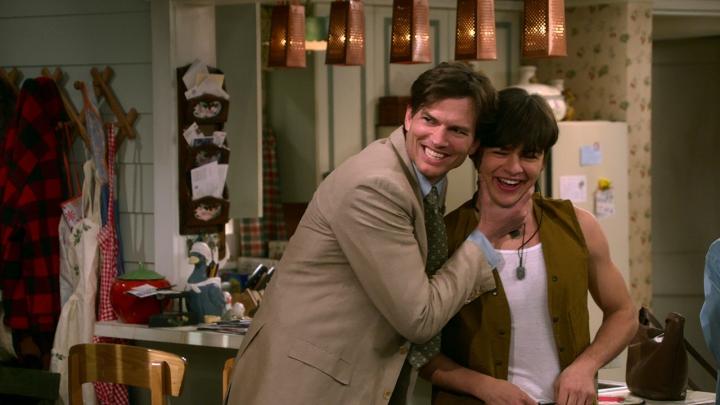 For fans of That ‘70s Show, it may be difficult to come to terms with the fact that the time period in which the sitcom initially aired is now considered a throwback era for the sequel series. Set in the same home in Point Place, Wisconsin, 15 years after the events that ended That ‘70s Show, That ‘90s Show follows Eric (Topher Grace) and Donna’s (Laura Prepon) teenage daughter, Leia (Callie Haverda), and the antics she gets up to with new friends she meets in town.

What was to be a quick visit with her grandparents Red and Kitty (Kurtwood Smith and Debra Jo Rupp, reprising their parental roles) turns into a summer that saves Leia from having to attend Space Camp with her dad. The nerdy loner Leia happens upon a group of teenage outcasts with whom she fits right in precisely because none of them truly fits in either. Through the 10-episode first season, a few characters have already emerged as fan favorites.

What would That ‘90s Show be without a Kelso? While Michael (Ashton Kutcher) and Jackie (Mila Kunis) make a short cameo in the first episode, it’s their son, Jay (Mace Coronel), who is a main character on the show. Much like his father, he’s a handsome womanizer with a history of being a “player.” But he instantly takes a liking to Leia.

Jay, however, shows a bit more depth than his dad did on the original show. While Michael Kelso was ditzy, it seems like Jay puts on an act more to live up to his father’s “cool” reputation, but is far smarter and more emotionally intelligent than he lets on. With plenty of room to grow, Jay will likely continue to be a fan favorite should the series be picked up for a second season.

Andrea Anders, who fans might recognize from her many supporting roles in movies like Daddy’s Home 2 and Spirited, as well as TV shows like Young Sheldon and Modern Family, plays the Forman’s new neighbor Sherri, who is renting the old Pinciotti house. The aimless, struggling single mom of half-siblings Nate and Gwen is revealed to be dating Fez (Wilmer Valderrama returning in a recurring role).

Sherri quickly makes herself at home at the Forman home, taking Kitty up on her offer to use their shower until hers is fixed, going “shopping” in their fridge, and getting relationship advice from the far-too-kind Kitty. She fills the nosy and annoying neighbor sitcom trope perfectly. But there’s something about Sherri’s strong Wisconsin accent, high ’90s-style scrunchie ponytail, and no-care attitude that makes her likable despite her invasive nature.

Every group of teenage friends on a show like this needs that one bookworm friend. The person is the overachiever who is happy to get up to all the silly antics, but when it’s all said and done, school and their future is a priority. On this show, that’s Nikki, played by Sam Morelos.

She’s ambitious, intelligent and, as typical high school rules would dictate, she’s dating the school jock, Nate. The mismatched pair have physical chemistry, but it’s clear they will eventually be following very different paths in life. Still, fans love Nikki’s maturity and kindness, like when she helps Kitty update her résumé to apply for a nursing job at the school. Nikki is making the most of her youth and enjoys every moment of high school life. But unlike the others, and even at such a young age, she’s already thinking several steps ahead and is aware of (and preparing for) something bigger out there in her future.

One of two returning main characters on the show (though there are plenty of nostalgic cameos, including both main and guest stars from the original), Red Forman hasn’t changed a bit. Happy to live a quiet life reading his newspaper in the kitchen and tending to his garden, the “old” Red comes out as soon as he sees his son — or any young kids — coming around the house again to disrupt his peaceful existence.

From the flowing insults and glaring looks to the “foot in your ass” threats, Red’s comic relief is just as funny several decades later as it was back in the ’90s. What makes Red so likable despite his surly attitude, however, is that beneath the tough exterior, he has heart. and not just for Kitty and Leia, but for others, too. Cases in point include when he went out of his way to help Sherri and quietly gave Nate an old plaid shirt he knew he liked.

One of the funniest characters on That ’90s Show, Ozzie (Reyn Doi) is the outcast who seemingly doesn’t care that he doesn’t fit in. He’s content being himself, rarely shows emotion, and loves to chat with his French-Canadian boyfriend, Etienne, who lives in Quebec (and no one believes exists).

Despite not being part of much of the drama that goes on with the rest of his friends, Ozzie is always there to offer sage advice, or deliver a biting comment. He approaches the idea of a young man being gay in the ’90s in an honest way, recognizing the difficulty he’ll have in coming out to his parents. Fans love how confident he is in himself and how comfortable he is in his own skin.

Just as Red hasn’t changed a bit, neither has Kitty. While Red has reveled in having an empty house, Kitty is right in her element the second she learns Leia will be staying and that there’s a new group of local friends to make use of the lonely and iconic basement. She’s quick to invite them over any time they want (much to Red’s chagrin), and starts planning a grocery list of snacks: this includes “Doritos, Tostitos, and all the itos.”

Kitty’s blissful innocence at times is countered by her ability to enforce rules when needed, even if she’s always doing it with her signature high-pitched voice and jovial attitude. Kitty has a few stand-out moments in the first season, including her heart-to-heart with Ozzie when he decided to come out to her (before telling his parents) and her dental surgery tattoo incident. It’s impossible not to like Kitty, who is always so warm and welcoming, and happy to give up her basement, her shower, even her groceries to whoever needs it.

Leia is the perfect combination of Eric and Donna. She’s dorky but, when push comes to shove, she can be fiercely confident as well. Younger than her parents were at the beginning of That ‘70s Show (Leia turns 15 during the first season), she still has a lot of learning to do and plenty of coming-of-age challenges. But she’s relatable to anyone who knows what it’s like not to fit in, especially at such a crucial and difficult age.

Her innocence is what makes Leia so endearing — from her admittance that she had never kissed a boy before to being unable to choose a movie for movie night — to the point that her peers might consider “hip” and “cool.” While Leia is open to trying new things, it’s always simply to have a good time and push her own boundaries, never because she’s giving in to peer pressure.

You can stream That ’90s Show on Netflix.