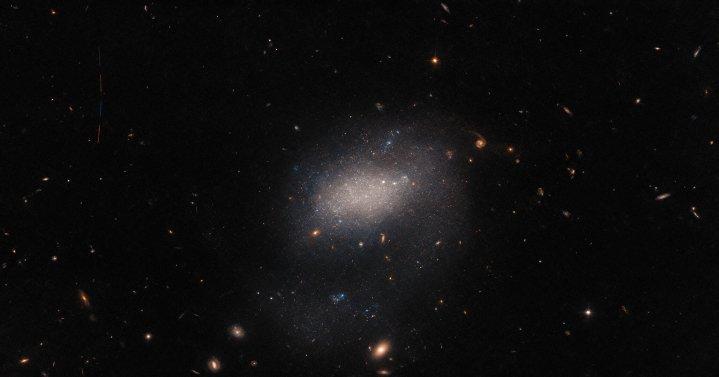 This week’s image from the Hubble Space Telescope shows a small but intriguing galaxy called UGC 7983, which is thought to be similar to some of the earliest galaxies that existed in the universe. Located 30 million light-years away in the constellation of Virgo, it looks like a hazy fuzz and is small enough to be considered a dwarf galaxy. Its unusual shape also make it a specific type called a dwarf irregular galaxy.

As well as the galactic star of the show, the frame of the image is littered with galaxies of all types that are visible in the background, as well as many nearby stars dotting the image that are located much closer than the background galaxies.

Astronomers are interested in studying dwarf galaxies like this one to learn about the formation of galaxies in the early universe. Researchers know that galaxies that formed when the universe was young, in the first few billion years after the Big Bang, were quite different from most of the galaxies we see today. And we know that dwarf irregular galaxies tend to have large amounts of dust and gas in them, making them hotbeds of star formation.

Dwarf galaxies were important during a period of the universe called the Epoch of Reionization, when early stars began to spread the first light throughout the universe. That’s why the James Webb Space Telescope is studying dwarf galaxies like the nearby Small Magellanic Cloud to learn more about how early stars and galaxies may have formed.

As well as being important for learning about the early universe, there’s another interesting feature to this image too. In the top left you can see a streak of light that was created by a small asteroid which happened to be passing by when the image was taken. If you look very closely, you can see the streak is broken up into four lines, which represent the four exposures that were combined to create the final image.