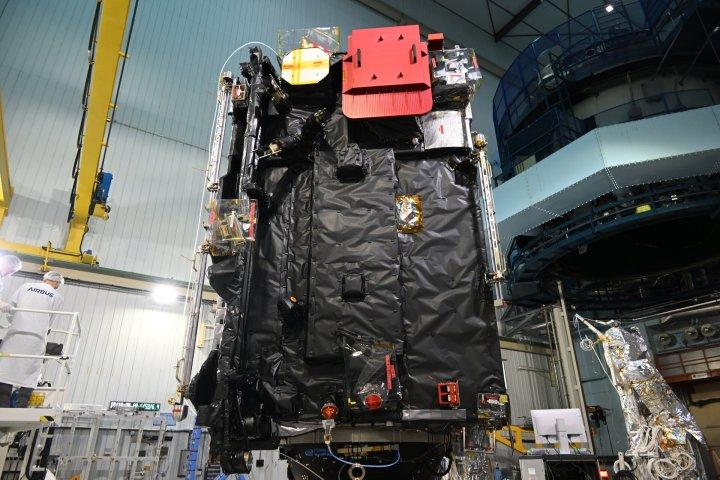 Out solar system will soon be getting a new explorer, as a mission to study the moons of Jupiter readies for launch.

The European Space Agency’s Jupiter Icy Moons Explorer mission, or JUICE, is scheduled for launch in just a few months’ time, so the spacecraft is now being packed up at its testing location in Toulouse, France, for transport to its launch location in French Guiana.

The spacecraft recently went through its final round of testing, including a thermal vacuum test to ensure it can handle the cold temperatures of space, and the system validation test in which the immediate steps after launch are simulated, like the deploying of booms and arrays that will happen in space.

The aim of the mission is to study three of Jupiter’s largest moons, Europa, Ganymede, and Callisto, each of which is believed to have liquid water oceans beneath icy crusts. The presence of liquid water makes each of these moons a potential target in the search for life beyond Earth, so JUICE will study each one using cameras and spectrometers. It will also learn about the local environment of Jupiter, such as its magnetosphere and plasma environment.

The spacecraft will go on a long journey, first traveling to Jupiter for eight years before entering into orbit around Ganymede. This will be the first time a spacecraft has orbited a moon other than Earth’s. The mission will perform a complex series of flybys of planets in the inner solar system to get it on its way, then it may also do a flyby of an asteroid before arriving at the Jovian system and doing another series of flybys to allow it to get close to the moons.

“This is the biggest deep-space mission we’ve ever launched, and it needs to nimbly orbit the moons of the largest planet in the Solar System using no less than 35 flybys,” said Andrea Accomazzo, flight operations director for the mission, in a statement. “JUICE’s exploration of Jupiter and its moons will require us to perform a decade of operations we’ve never done before, and a lot could go wrong. In these weeks of simulations, we’ll have every possible problem thrown at us, so that we can handle any situation in space.”

Launch of the mission is scheduled for April this year.