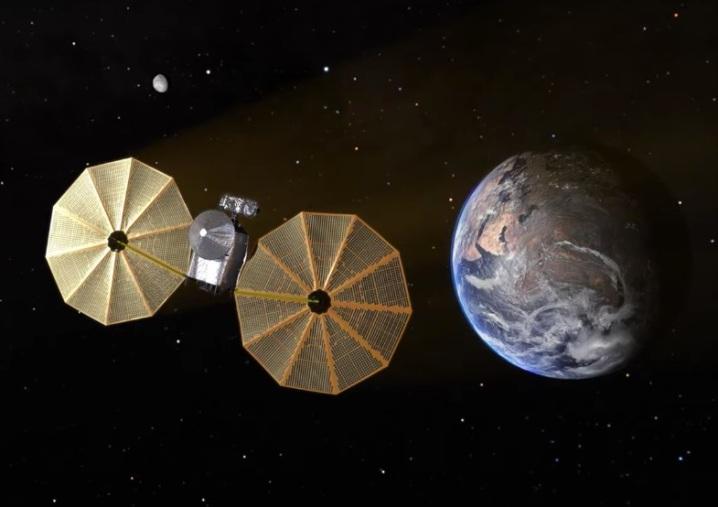 NASA has announced it will not be making any further attempts to latch the solar array of its Lucy spacecraft, at least for now. Launched in October 2021 on a mission to visit the Trojan asteroids in the orbit of Jupiter, Lucy had problems deploying one of its two circular arrays, and various attempts to address the issue over the past year have not managed to fix the problem entirely. However, NASA says that the spacecraft should be able to operate on its mission as planned.

The two arrays needed to be folded up while the spacecraft was launched, then deployed in a clock-like manner once the vehicle was in space. One of the arrays deployed as planned, but the other one failed to unfurl all of the way, and so did not latch into place. Engineers managed to deploy the array most of the way by using two motors to tug hard on the lanyard that pulled the array into place. That got the array deployed to between 353 and 357 degrees open out of a total of 360 degrees.

However, the team had to pause its attempts to further deploy the array when it detected a slight vibration between the array and the rest of the spacecraft that had them concerned. Now, NASA has decided that further efforts to deploy the array are unlikely to do any good, so it won’t be making any more attempts for now.

“Using engineering models calibrated by spacecraft data, the team estimates that the solar array is over 98% deployed, and it is strong enough to withstand the stresses of Lucy’s 12-year mission,” NASA writes.

The array has been generating enough solar power for the mission even in its unlatched state, but one concern was that vibrations from the spacecraft firing its thrusters could cause damage to the array. So when Lucy made a flyby of Earth last year the team chose to adjust its course to lessen the atmospheric drag it experienced.

As the spacecraft is now moving away from the sun, it will be getting colder which will make any attempts to latch the array less productive. The big test for Lucy will come in February 2024, when it will make another approach of Earth and fire its main engine for the first time. The team can then assess whether the array can handle the forces involved or if they will need to make further interventions.