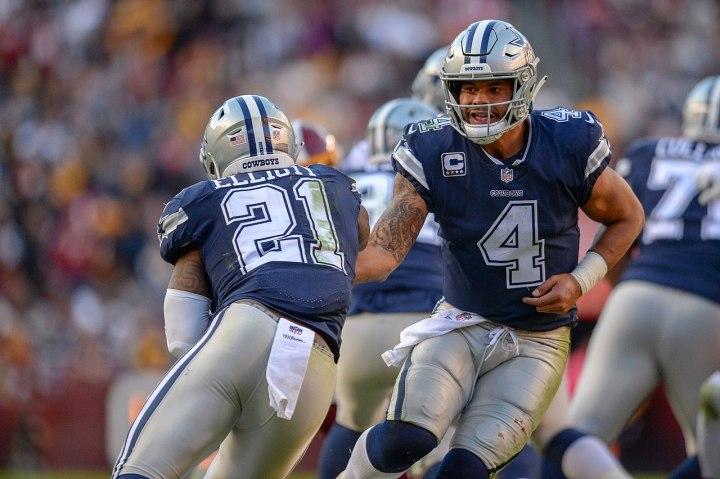 The NFL Playoffs continue this weekend with the most exciting two days in football, the Divisional Round. After today, the Conference Championships in the AFC and NFC will be set and four teams will remain in the hunt for the Super Bowl.

Sunday’s Divisional Round matchups are tremendous. The afternoon game will include the No. 3 Cincinnati Bengals traveling to upstate New York to take on the No. 2 Buffalo Bills. In the early evening, the No. 5 Dallas Cowboys will take on the red-hot No. 2 San Francisco 49ers.

When is the 2023 Divisional Round?

The third game of the Divisional Round will feature the Cincinnati Bengals taking on the Buffalo Bills at 3 p.m. ET on Sunday, January 22. The game will be played at Highmark Stadium in Orchard Park, New York. According to FanDuel, the Bills are favored by 5 points.

The fourth game of the Divisional Round will pit the Dallas Cowboys against the San Francisco 49ers at 6:30 p.m. ET on Sunday, January 22. The game will be played at Levi’s Stadium in Santa Clara, California. According to FanDuel, the Niners are favored by 3.5 points.

How to watch the 2023 Divisional Round — Sunday

The afternoon game between the Bengals and Bills will air on CBS at 3 p.m. ET. The announcers will be Jim Nantz, Tony Romo, Tracy Wolfson, Jay Feely, and Gene Steratore. Watch the game on your television or through a device with internet access on CBS.com. Log in with your cable provider for access.

Watch Bengals vs. Bills on CBS

The early evening game between the Cowboys and Niners will air on Fox at 6:30 p.m. ET. The announcers will be Kevin Burkhardt, Greg Olsen, Erin Andrews, Tom Rinaldi, and Mike Pereira. The game can be accessed on your television or through a device with internet access on Fox.com and Foxsports.com. Log in with your cable provider to access the live feed on the website.

Watch Cowboys vs. 49ers on Fox

How to stream the 2023 Divisional Round — Sunday

Stream the game between the Bengals and Bills through the CBS app and Paramount+. Access the CBS app in the app store on your smartphone or tablet or through a connected television device. For Paramount+, there are two plans: Essential and Premium. The Essential Plan (with limited ads) is $5 per month or $50 per year. The Premium Plan (ad-free) is $10 per month or $100 per year.

The game between the Cowboys and the Niners can be streamed through two apps, Fox Now and Fox Sports. Both apps can be accessed in the app store on your smartphone or tablet and through a connected device, such as Apple TV or Fire TV. Log in with your cable provider for full access.

In addition to cable TV, Fox can be accessed on subscription live TV streaming services, such as Hulu + Live TV, YouTube TV, FuboTV, and Sling TV. Prices may vary depending on the service and package. Hulu + Live TV costs $70 per month and can be bundled with ESPN+ and Disney+. Sling TV offers Orange and Blue packages, which cost $40 per month each or $55 per month if combined. FuboTV, which ranges from $70 to $100 per month, and YouTube TV, which costs $65 per month, offer free trials so subscribers can try out the services before committing long-term. The Bengals-Bills game on CBS can be found on all of the aforementioned live TV services besides Sling TV.

The Bengals head to Buffalo after defeating the Ravens 24-17. Cincinnati will be in trouble up ront as they could be missing three starting offensive linemen. The Bills advanced to the Divisional Round after escaping with a 34-31 win over the Dolphins. The Bills will look to punch a ticket to their second AFC Championship appearance in three years.

The Cowboys are riding high into the Divisional Round after dominating the Bucs for a 31-14 victory. However, they will need to shore up the kicking game after Brett Maher missed four extra points this past Monday night. The Niners might be the team to beat in the NFC after defeating the Seahawks 41-23. If quarterback Brock Purdy continues to play mistake-free football, San Francisco has a great chance to win their first Super Bowl since 1994.