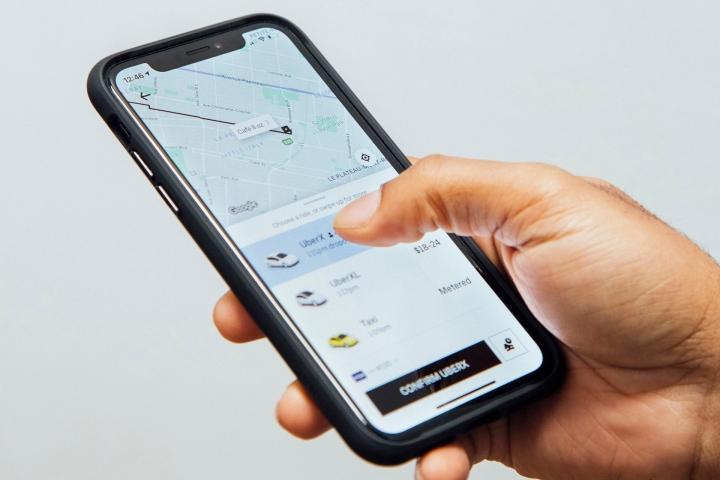 Getting around without a car can be tricky, especially in certain areas of the U.S. Luckily, ridesharing apps have grown increasingly popular in recent years. It’s a good thing, too, since ridesharing and carpooling are eco-friendly ways of getting around and can even save you time on your trip since you’ll be able to use carpool lanes.

With how popular ridesharing apps are nowadays, you’ve likely taken at least one trip using Uber or Lyft, but there are plenty of other great apps that you may prefer depending on your location and what sort of travel you’re looking to do. Here are our picks for the best rideshare apps in 2023 to get you where you need to go.

San Francisco-based Uber is by far the most popular ridesharing service around. As of April 2022, Uber has 93 million active users. The app works worldwide, too, so you can count on Uber to get you home even if you’re partying in another country.

Uber’s pricing is fairly competitive with other offerings, and with the number of drivers on the platform, you should have no trouble getting a standard-fare ride on most days. If you don’t mind riding with strangers, Uber provides a discounted carpooling option in most cities called Uber Pool to make the expense a little more palatable. If you’re riding with a larger group, you can use the app to split the fare among passengers, which is a great convenience for nights out with the gang.

Aside from Uber Pool, Uber offers a variety of ride types across different price points. Here’s a quick rundown of the rides you’ll find in most major cities:

Should you or one of the members of your party need it, Uber is one of the few on-demand services offering a disabled access option, called Uber Assist. Select it in a supported city, and you’ll get a certified driver with a vehicle large enough to accommodate a scooter or folding wheelchair.

Uber is the big papa of the rideshare world, but it’s far from the only option. Let’s take a look at a few other options.

Lyft, the second-largest ridesharing app by volume — and our favorite — offers transport in over 644 U.S. cities, including New York City, Los Angeles, and San Francisco. Perhaps best-known for the bright pink mustaches that once adorned the grills of its drivers’ cars, Lyft offers a range of vehicles to choose from, including average-sized Lyft autos and larger Lyft Plus cars.

Much like Uber, Lyft institutes demand-based pricing during the busiest hours. If that’s too rich for your blood, Lyft offers a carpooling service called Lyft Shared (previously Lyft Line), which lets you split fares between passengers if you opt for a larger private car.

Lyft offers a few ride options similar to Uber. The Lyft Lux rides are very similar to Uber Lux. You’ll be paired with a newer car that has a leather or vinyl interior. Lux Black and Lux Black XL are the top-tier rides from Lyft in both sedan and SUV sizes.

Gett, the Israel-based ridesharing app formerly known as GetTaxi, has a user base that pales in comparison to Uber and Lyft. The service covers more than 100 cities globally, namely in the U.K., U.S., and Israel. Abroad, users can request a variety of transportation options, including both traditional cabs and limousine services.

The biggest incentive for using Gett while traveling abroad, however, is pricing. The service never charges a premium during busy hours and pays drivers a competitive hourly wage rather than a percentage of every fare, like Uber and Lyft. The company then passes those savings on to riders.

Curb is another ridesharing underdog, but one that’s expanding aggressively — the service taps a network of 50,000 taxis and hire cars across more than 65 U.S. cities.

Fundamentally, Curb works much in the same way as Uber and Lyft: Hail a driver, and you’ll be whisked away to your final destination. The service also lets you schedule pickups ahead of time in some cities for a $2 fee. Know you’ll need a ride after a long night of ringing in the New Year or a friend’s birthday party? Set a time and location, so that a Curb driver will await your arrival. And it never charges surge pricing.

Curb also offers a “Pair and Pay” feature in NYC, Boston, Philadelphia, Miami, and Las Vegas, allowing you to pay via the app after entering a matching code for your chosen Taxi Cab.

This San Francisco-based startup started out providing transportation to and from airports. Now, in addition to airport rides, the company offers around-town rides in a few, select cities. They are currently up and running in 16 metro areas, including 22 airports. The app also lets you schedule airport rides up to two months in advance, and a flat rate means you don’t have to worry about hidden fees and surcharges. The most unique thing about Wingz, though? Riders can pick and choose their favorite drivers, and the company promises that moving forward, the service will remain less expensive than a taxi or limo.

If you don’t mind hitching a ride with a few others, Via is worth considering. Co-founded by Stanford neuroscience Ph.D. Daniel Ramot, the app uses a “logistics engine” to fill as many seats as possible in cars headed toward popular destinations. Unlike Uber and Lyft, the routes are static — you simply tell the service where you’d like to go, and you’ll get dropped off at a nearby location along the way. These static routes mean that you’ll often have to walk a block or two to reach your pick-up location, but Via’s reservation system doesn’t preclude you from bringing a pal or two.

The app also automatically finds cars with the necessary seating, and each extra member of your party rides at half price. Via is available in Arlington, VA; Chicago; New York; Los Angeles; West Sacramento, CA; Salt Lake City, UT; Birmingham, AL; Cupertino, CA; Washington D.C, and Newton, MA, as well as over 35 countries worldwide. It operates 24 hours a day, 7 days a week.

Scoop is a ridesharing app for iOS and Android that lets you arrange carpools with your co-workers and neighbors. Aside from promising to provide a convenient way of scheduling trips to meet your daily schedule, it also prides itself on being a social app, letting users “unlock new opportunities to meet people” and improve their overall wellbeing.

The app is simple enough to use, allowing you to create a schedule for your daily commutes and then use an algorithm to match you with the most suitable carpool. It lets you use the app as a rider or driver, while also providing a means for sharing the costs of travel. Helpfully, it also includes a rating system for users, so that you can have a little more information on people before deciding to pool with them.

Bridj, an on-demand bus service that was founded and started in Boston by Chicago and Washington, D.C. transportation department head Gabe Klein, supercharges the concept of crowd-sourced busing established by Via, Split, and others. Instead of relying on a fleet of SUVs to transport waiting passengers, Bridj operates 14-seat luxury shuttles with Wi-Fi and leather seating. It’s like the Mercedes-Benz S-Class of the minibus world.

In October 2017, Bridj was acquired by an Australia-based Transit System and is working exclusively in Sydney. The normal cost of a one-way journey is a flat $3.10, or $1.60 for concession cardholders. making it an affordable choice.

GoKid is an app that focuses on helping parents get rides for their kids to and from school and other activities. It’s not a ridesharing app for daily commuters — instead, it prioritizes schedule management and community involvement. Stefanie Lemcke, a European immigrant and mother of two, created the company to reduce the amount of time parents and their kids spend sitting in traffic jams caused by neighbors all trying to drive their kids to the same place.

As a way to organize carpooling among parents, GoKid excels as it features helpful tools such as in-app messaging to aid scheduling, calendar syncing with your iOS or Android device, and routing assistance to help whoever’s turn it is to drive find the quickest route to school, soccer practice, or after-school tutoring. The best part about it? It’s entirely free, as all it takes to work is a handful of parents in the same community who are willing to be drivers when their turn comes around.

Obviously, there are a lot of questions parents may have before willingly letting their kids leave the house without them, but GoKid answers them on its FAQ page.

According to the company, Arro taps into a database of more than 20,000 licensed taxis to provide clients with on-demand transportation. Unfortunately, at this time, Arro is only available in a select group of cities, but if you happen to live in New York, Chicago, Boston, San Francisco, Houston, Miami, or London, you can take advantage of the services.

Arro works a lot like Uber, Lyft, and the myriad of other well-established ridesharing services. All you have to do is confirm your location and a driver will arrive to pick you up and take you to your desired destination.

Because it relies on cabs, Arro fairs are more stable than those you find with Uber or Lyft. Also, like a traditional cab ride, your fare will be based on the meter. Arro claims its app is more reliable than other cab-hailing competitors. This is because Arro uses proprietary terminals to communicate with its network of drivers, rather than the driver’s personal smartphones.

Flywheel is a must-try app if you want to get somewhere fast. The service offers great convenience by telling you exactly where your cab is and how long you’ll have to wait before it picks you up. One major advantage of using this service is that the company only works with local, professional drivers so you can be assured you can get to your destination quickly and safely.

Unfortunately, it’s not as widely available as the other apps. It is currently available in San Francisco Bay Area, Seattle, Sacramento, and San Diego, so if you’re traveling in the area, snag a ride.