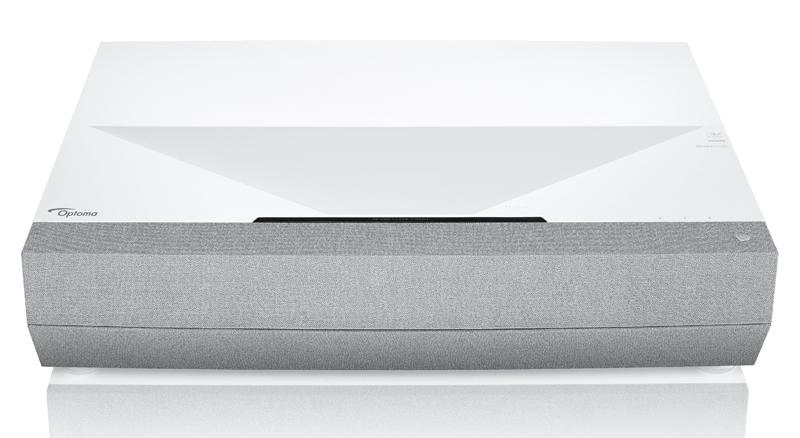 Everyone dreams of having a home theater setup — in beautiful 4K resolution and HDR, of course. That’s not as out of reach as you might think: Today’s home projectors are more affordable than ever, frequently come with 4K support, and can fit in a variety of spaces as long as you have the necessary wall space for the screen. If you’re looking for something truly cinematic, we have the best 4K projector models you should check out.

Why you should buy this: Hands down the best experience for home theaters.

Who it’s for: Serious cinephiles who want the movie theater experience at home.

Why we picked the Optoma CinemaX P2:

If you want a true cinema experience in your home, it doesn’t get much better than the Optoma CinemaX P2. This is a truly no-compromises 4K projector that offers bright and vivid images, impressive contrast, and decent sound in a compact package. The P2 also supports voice commands through Google Assistant and Alexa.

The CinemaX P2 has the sharpest 4K image around, and it doesn’t suffer from the image artifacts that are common in lesser projectors. It also supports HDR10, making the colors in films really pop. It’s particularly noticeable in landscape shots.

The P2 also comes packed with a 40-watt soundbar that sounds pretty good; sure, it isn’t as robust as a dedicated speaker system, but it’s more than competent for an all-in-one solution.

For a stylish ultra-short throw projector that delivers the best of the best, the CinemaX P2 is unrivaled.

Why you should buy this: VAVA’s projector casts a great image without taking up much space. A solid built-in soundbar is a bonus.

Who it’s for: People living in apartments that want the home theater experience.

Why we picked the VAVA:

Not everyone has a spare room or a spacious living area to convert into a home theater. Apartment living is more common than ever, and with apartment living comes limited space. Most apartments won’t let you mount a home theater projector in the ceiling. That’s where short-throw projectors like the VAVA find their niche. The VAVA 4K projector creates a large 100-inch image that beats any 4K TV, and it only needs 7 inches of clearance to do it.

The VAVA also supports HDR, so images are on par with other name-brand projectors. The VAVA also stands out in the sound department. With a 60-watt Harman Kardon soundbar built-in, the VAVA delivers an excellent sound that should be more than enough for compact spaces.

The design is appealing for people living in apartments as well. It is just 21 inches wide and considerably smaller than the CinemaX P2. The VAVA can fit on any shelf or countertop.

Why you should buy this: You want a bright projector with convenient voice control.

Who it’s for: People who want to use their projectors in brighter environments.

Why we picked the Optoma UHD52ALV:

Projectors are great alternatives to TVs, but they have one major downside. While they may offer a larger picture than any television on the market, most can be viewed only in dim or near-dark rooms. That isn’t ideal for most people, especially if you want to watch sports or TV shows before the sun goes down.

A bright projector like the UHD52ALV can be seen in rooms with moderate lighting, and its support for HDR10+ makes colors more vibrant and visible. That’s what makes it the perfect projector for those who want to use it at any time of day.

The UHD52ALV also supports Alexa and Google Assistant, so you can use your voice to change the volume, turn the projector on and off, and even change the input source.

Why you should buy this: It’s a 4K projector roughly the size of your hand.

Who it’s for: Anyone who wants to take a 4K projector on the go.

Why we picked the AAXA 4K1:

Everyone loves a good home theater experience, but why should that strictly stay in your home? Portable projectors have been around for a long time, but they rarely pack the same quality as a dedicated home theater projector. That’s what makes something like the AAXA 4K1 so interesting. AAXA has always packed a lot of features into portable projectors, and the 4K1 is no different.

For one thing, its native resolution is 4K, which is nearly unheard of in this size and price range. It can also cast an image of 200 inches, which means you can get a full cinema experience from anywhere. It sports two HDMI 2.0 ports, so you can connect multiple 4K media devices. Its dual-watt speakers won’t blow you away, but they are serviceable for this tiny little projector.

Whether you want to impress business clients or have an outdoor movie night, the AAXA 4K1 provides an impressive and large image in a projector that fits in your hands.

Why you should buy this: You get a 4K projector for just over a grand.

Who it’s for: Anyone who wants a 4K projector without spending at least $2,000.

Why we picked the ViewSonic PX747:

If you are on a budget and looking for an entry-level 4K projector, then the ViewSonic PX747 is the best option. A few years ago, finding a 4K projector at this price range would be nigh impossible. But today you can get a 4K projector that is surprisingly bright at 3,500 lumens, supports HDR, and doesn’t break the bank.

It comes with a few compromises, however. The PX747 isn’t as color accurate as some of the other projectors on this list, and the keystone adjustments leave a lot to be desired — but at the end of the day, you’re getting a 4K HDR projector for barely $1,000. That’s a win in our book.

Why you should buy this: It’s a high-end 4K projector for heavy-duty professional work.

Who it’s for: Those who want the best and brightest 4K image in their latest professional setup.

Why we picked the LG ProBeam BU53PST:

If you demand the best from your projector and have no problems paying for it, this latest ProBeam from LG is an incredible upgrade from average projectors to give you the high-end specs you want for a top-notch viewing experience. It’s also a professional projector, so if you need a heavy-duty model for serious work or marketing-related tasks, it’s one of the best picks.

The short throw projector (around 6 to 7 feet is needed) can throw up to a 150-inch screen with a 4K resolution, down to a 40-inch screen in tighter places or a larger one if you have more room. The laser lighting is also incredibly bright at 5,000 ANSI lumens, about the brightest you’ll find at the consumer level, and ready to perform even in daylight conditions. Zoom x1.2 and lens shift also provide some customization options.

The projector also uses the HDBaseT standard to provide a variety of functions with one cable connection, including video, audio, Ethernet, and more. Your setup will need to support it, but it’s another plus for businesses that are ready. It’s also a reason why this high-performance projector isn’t especially well-fit for home theaters.

How should you choose a 4K projector?

There are many considerations, but let’s look at two of the most important: Resolution and brightness.

Next, consider lumens, a loose term for how bright a projector is usually displayed as ANSI lumens. There is no hard and fast science to measure lumens, and manufacturers usually have their own standards. So a 2,500-lumen projector from one company could be 3,000 lumens at another. Generally, you will want to find something between 2,500 and 3,000 lumens, although projectors designed for dark rooms are sometimes lower than this. For living rooms and other brighter rooms, you really want something that’s at least 3,000 lumens, preferably above that.

What does DLP mean?

You will also see projectors promoting DLP, laser, or LED lighting fixtures. DLP and LED are almost used interchangeably since all LED projectors are DLP (though not all DLP projectors are LED). A DLP projector uses thousands of tiny mirrors to build an image, which makes for sharp and vibrant images. LED refers to the light source, and these are usually brighter and last longer than their incandescent counterparts.

Laser projectors are relatively new and costly, but they have incredible image quality and get very bright. If you have the money for one, they are definitely the best projectors you can buy.

What inputs do I need on my projector?

You will also want to consider inputs. Ideally, you’ll want at least HDMI 2.0, which adds HDR support, but the latest HDMI 2.1a standard will ensure you are ready for all the latest upgrades (even 8K, if those projectors ever hit the market). If you have multiple accessories to connect, like a console, Apple TV, and so on, you’ll want multiple ports, too.

Are short-throw projectors better for homes?

Can you really tell the difference with a 4K projector?

While it’s not a TV display, the image that a projector creates is still affected by how much video data is processed, so 4K can make a big difference. However, it’s important to adjust the image size for optimal conditions — if you go outside the size the projector is designed for, you’ll lose advantages of 4K. If you choose an image that’s too small during setup, you won’t be able to tell the difference.

A high-quality projector screen should be sufficient in many cases. They do make screens that are especially designed for 4K to show off as much detail as possible, but these can be more expensive. Always check to see if your projector model recommends a screen to accompany it.

Struggling? check out comprehensive guide on how to choose the right projector for you.