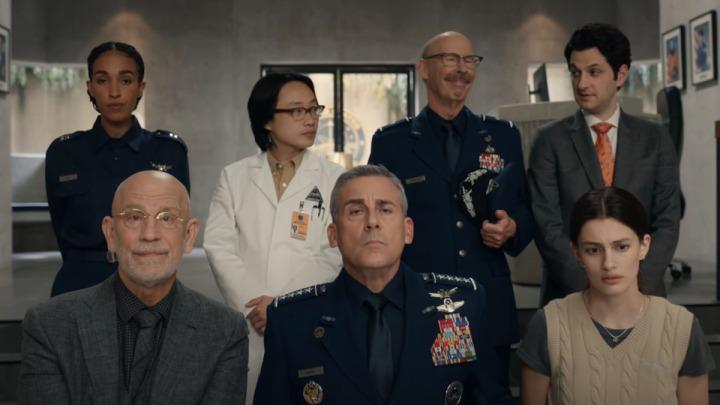 In recent years, Netflix has become notorious for canceling many of its original series. Though projects like Stranger Things, The Witcher, and Big Mouth continue to reign supreme on the streaming service, plenty of other popular shows were surprisingly struck off its list of ongoing productions.

These sweeping changes seem inevitable for a company that produces a seemingly infinite supply of films and TV shows. But many of Netflix’s axed series had gotten such rave reviews and devoted fans that their getting canceled seemed unthinkable. As audiences mourn what could’ve been, here’s a list of some of the best Netflix shows that shouldn’t have dropped.

Like The Office, this Steve Carell-helmed series had divisive reviews in its first season, only to gather widespread acclaim during its second season. Unfortunately, Space Force was canceled after it left its characters facing a giant meteor hurdling toward the Earth. Had the series continued where it left off, it could’ve continued to forge its own identity and become even more popular with audiences.

The Chilling Adventures of Sabrina

Following the surprising success of Riverdale on Netflix, the streaming service gave audiences another dark reimagining of Archie Comics centered around everybody’s favorite teenage witch. Delving deep into the horrors of the occult, this coming-of-age series follows Sabrina as she learns to master her magic powers and protect her loved ones from the forces of Hell.

The show enchanted audiences and had a successful run on Netflix for four seasons. Unfortunately, the show was another victim of Netflix’s mid-pandemic cancellations. It still had a couple of crossover episodes with Riverdale during its sixth season to wrap up specific plot points. Even so, it deserved more than just two episodes to do the series justice.

Created by one of the writers from the critically acclaimed Gravity Falls, this animated sitcom follows a socially awkward genius and her team of oddball coworkers as they try to run the world’s shadow government and hide all their conspiracies.

With a cast that includes shapeshifting lizard people, a human/dolphin super soldier, a Terminator president, and a giant psychic mushroom, this weird and wacky show had the potential to be Netflix’s version of Rick and Morty. Though the company renewed Inside Job for a second season, it recently canceled the series, shocking many fans of the series.

By the time this show premiered, Mike Flanagan had long established himself as a horror master with Netflix’s Gerald’s Game, The Haunting of Hill House, Bly Manor, and Midnight Mass. Though his latest series, The Midnight Club, may not have been as beloved as his previous works, it was still a hit on Netflix, having remained in the service’s Top 10 list for about three weeks.

But unlike the director’s previous shows, The Midnight Club had set up a story spanning multiple seasons, which were supposed to adapt more of author Christopher Pike’s books. Unfortunately, Netflix buried this show after one season, leaving many of its mysteries and characters’ fates unresolved. It seems unlikely that Flanagan would be able to return to revive the show, as he is now working exclusively with Amazon on a series based on Stephen King’s The Dark Tower books.

This beloved series is a fictional account of how the Gorgeous Ladies of Wrestling came to be. With a spectacular ensemble, hilarious moments, and a killer soundtrack, GLOW was a frequent hit with fans and critics, and Netflix had plans to make a fourth season to wrap up the show. But the company suddenly canceled production of the final season during the pandemic, and the news came like a pile driver to avid viewers.

Created by The Wachowskis (The Matrix) and J. Michael Straczynski (Babylon 5), Sense8 follows a group of strangers who discover they all share a mental and emotional link. The series was lauded for its message of empathy across race, gender, and sexuality and had even won a GLAAD Media Award for its first season.

Netflix canceled the series after the second season’s cliffhanger ending, and fans protested with online petitions, hashtags, and even phone calls to the company. Fortunately, Netflix responded by producing a two-and-a-half-hour episode as the series finale. Even so, with its passionate fanbase and plans for a third season, Sense8 deserved much better treatment from the higher-ups.

This award-winning series follows a young blind woman who returns after being missing for seven years with her sight and the self-given name, “the OA.” Though reviews were mixed at first, such a mind-boggling show developed a massive cult following, with Empire labeling it the seventh-best TV show of all time. But like with Sense8, The OA was canceled after its second season, despite ending on a cliffhanger.

Fans had campaigned for the show’s revival with hashtags on Twitter, a petition on Change.org, and a digital billboard in Times Square, making it a movement on par with that of the Snyder Cut. One fan protested with a hunger strike in front of Netflix’s headquarters in Los Angeles. All this proves the show was too big to be taken off the air and that Netflix shouldn’t have taken it away.

This critically acclaimed show follows two FBI agents and a psychologist as they try to understand the psychology of serial killers like Ed Kemper, David Berkowitz, and Richard Speck so they can solve other cases. Mindhunter is a riveting and tasteful exploration of the human condition with outstanding performances from its cast, including Cameron Britton’s frighteningly accurate portrayal of Kemper.

Though Netflix hasn’t officially canceled Mindhunter, the series has been on indefinite hold for almost four years, and the cast has been released from their contracts. It’s a shame because, according to Collider, the third season was going to have the cast go to Hollywood and meet directors Jonathan Demme (The Silence of the Lambs) and Michael Mann (Manhunter) as psychological profiling became more mainstream. Unless showrunner David Fincher decides to continue the series, chances are audiences won’t see the Behavioral Science Unit anytime soon.