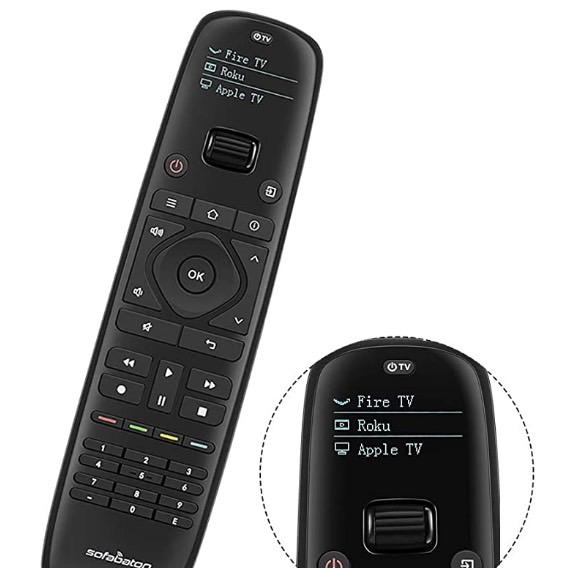 If you own a modern smart TV and perhaps a soundbar, plus a game console, you probably don’t need a universal remote. The remote that came with your TV is capable of helping you access all of the TV’s built-in apps, which likely include all of the big streaming services like Netflix, Hulu, Amazon Prime Video, and more. That remote might even have a mic for voice commands, making it that much easier to get things done.

But then again, your setup might be more sophisticated, with a Dolby Atmos, A/V receiver, an Ultra HD 4K Blu-ray player, multiple game consoles, and even a streaming device or two … hey, who are we to judge? If that sounds like you, a powerful universal remote that can control a slew of different devices is exactly what you need to become the Captain Kirk (Picard? Pike?) of your home theater starship Enterprise.

Except for one problem. The universal remote category has become as barren as the record store landscape during the early 2000s. That’s largely due to Logitech’s untimely departure. Its Harmony line of remotes was the best you could get, and now that they’re no longer being made, it has left a black-hole-sized gap, with only one or two not-quite-satisfying options remaining.

If you can find a used or refurbished Harmony remote like the Harmony 665, the smart home-oriented Harmony Companion, or the no-holds-barred Harmony Elite, you might want to grab one if the price is right. Logitech still supports existing Harmony users and has said it will continue to do so for the foreseeable future.

That leaves us with four universal remote options, each with its own strengths, weaknesses, and prices.

Why you should buy it: It’s affordable, easy to program, works with Bluetooth and infrared, and supports up to 15 devices.

Who it’s for: Those who own a lot of devices and don’t want to spend a lot on a universal remote.

Why we picked the SofaBaton U1:

What makes the SofaBaton U1 unique is that it can control both IR and Bluetooth devices — up to 15 of them — but it only costs $50. Even when the Logitech Harmony ruled the universal remote category, it cost hundreds for that kind of flexibility.

You program it wirelessly with the SofaBaton U1 companion app for iOS or Android, which is way more convenient than using a PC and a USB cable.

You can search SofaBaton’s database for your specific device models, and if they’re listed, adding them takes just one tap. If they aren’t listed, you can use the U1’s learning function to teach it the needed commands with your factory remote.

Don’t like how the buttons work? You can assign (or reassign) them from the full list of every available command — from any added device. If you’re controlling your Apple TV, for instance, you can assign the volume keys to control your soundbar or A/V receiver instead of using the Apple TV’s volume controls.

To choose which device you want to control, a handy scroll wheel lets you navigate an OLED display at the top of the remote. We really like how quickly you can make changes using the SofaBaton app — they happen instantly, no synchronization steps required.

Is the SofaBaton U1 perfect? No. The buttons aren’t backlit so they’re harder to see in a dark room. Unlike the older Harmony remotes, there are no activity buttons for things like “Watch Apple TV” that used Logitech’s helpful wizard-based programming.

But there is a workaround: The SofaBaton U1 has four color-coded macro buttons above the number pad, and these can be easily programmed using the app to execute any sequence of commands from any of your added devices. Better yet, you can set these four macro buttons for each device, giving you a maximum of 60 macros. There’s no way to label the buttons, so you’ll just have to remember what each one does.

Why you should buy it: It does just enough, and sometimes that’s all you need.

Who it’s for: Anyone looking for a universal remote to handle the basics and nothing more.

Why we picked the GE Backlit Universal Remote Control (Model 48843):

The GE 48843 remote provides a straightforward way to control up to four devices using a host of pre-programmed codes while sporting a traditional design equipped with a basic D-pad and all of the most salient TV/media commands you could need.

If touchscreens and programming via a PC or mobile app feel too convoluted for your needs, the GE 48843 is a perfect choice: It’s cheap — but not cheaply made — and it has everything you need to control your infrared devices.

Why you should buy it: It gets closer to the Harmony’s activity-based shortcuts than any other universal remote.

Who it’s for: Anyone looking for a powerful universal remote and who doesn’t need Bluetooth compatibility.

Why we picked the One for All Smart Control 8 Universal Remote Control (URC7880):

One of the Logitech Harmony’s best features was its ability to group device commands into activities — macros that could be executed with a single button. And while the URC7880 isn’t nearly as easy to program as the Harmony family, it does give you that same activity-based, one-button access to macros, which is a huge convenience.

Those activities can combine commands from up to eight devices, which should be more than enough flexibility for turning on your TV, your Blu-ray player, and your A/V receiver and then setting them to the desired inputs and outputs. The only caveat is that there’s no way to exert control over these devices if they aren’t infrared-compatible — the URC7880 uses Bluetooth to talk to the One for All app on your smartphone, but for some reason, it can’t pair with any other Bluetooth device, like a game console or streaming media device.

In addition to the five available activities, there are three shortcut buttons that can be programmed to access your favorite streaming media services like Netflix, Amazon Prime Video, or Disney+. And if any of your devices’ infrared codes aren’t stored in the One for All online database, you can use the URC7880’s learning function to grab them from your original remote.

The companion app can even act as a remote finder if you manage to misplace the URC7880. Our only real complaint is that this unit doesn’t have backlit buttons for easier navigation in darkened rooms.

Why you should buy it: You can use your voice to control most of your devices, which makes it a very compelling alternative to standard universal remotes.

Who it’s for: Anyone who likes the idea of a streaming media device that can also act as a voice-driven universal remote for infrared devices.

Why we picked the Amazon Fire TV Cube:

Yup, we know: The Amazon Fire TV Cube is not a universal remote. But hear us out on this one. What you may not know about the Fire TV Cube is that unlike all other Fire TV devices — and, frankly, unlike all other streaming media devices, period — it can control many of the other devices in your home theater. And you can use spoken commands to do it.

Buried within the Fire TV Cube’s small box-shaped enclosure are a set of infrared transmitters. Just like any other universal remote, these can be programmed to emit IR commands for a huge variety of devices, including TVs, soundbars, and A/V receivers.

Within the Fire TV’s interface, you can set up these devices, which can then be controlled using the Fire TV Cube’s included remote, or for a true starship Enterprise experience, you can use your voice instead. Saying, “Alexa, open Netflix,” can trigger the same sequence of commands as the Activities on a Harmony or One for All remote — your TV turns on, your A/V receiver turns on, and your Fire TV Cube opens the Netflix app. You’re good to go.

There is one limitation: All of your devices must be IR-controllable. The Fire TV Cube has Bluetooth, but this is only used for pairing things like headphones and game controllers. However, if a device you want to control can be connected to your TV via HDMI, there’s a good chance the Cube will be able to control it over HDMI-CEC anyway.

And because this is Alexa we’re talking about, the Cube can also control any smart home devices you may want to use while watching a movie, like dimming smart lightbulbs or rolling down your motorized smart blinds.