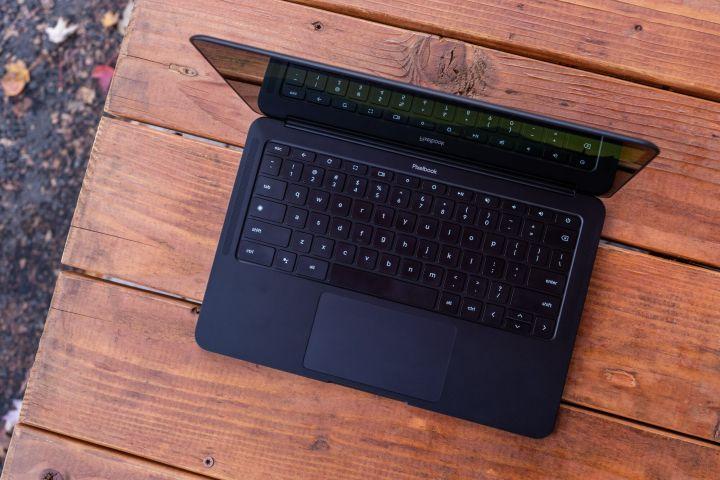 We’ve reviewed hundreds of the best laptops over the years, testing for important qualities like performance, battery life, and display quality. And we’ve found that Chromebooks consistently excel at performance and reliability. The best Chromebooks we’ve assembled here are something special, however. They offer solid performance, excellent functionality, and enough diversity to handle just about any need.

Why you should buy this: It’s the best Chromebook you can buy.

Who it’s for: Students, people who need to work on the go or travel with a laptop.

Why we picked the Google Pixelbook Go:

Chromebooks are known for being ultra-cheap alternatives to Windows and Mac. But the Pixelbook Go doesn’t feel like a cheap imitation. A Windows laptop that costs around the same won’t feature anything like the build quality, portability, and performance the Pixelbook Go can offer. The efficiency of Chrome OS has a lot to do with that, but it’s also a credit to Google’s hardware team. The Pixlebook Go is the complete package, elevating the strengths of its platform.

With unmatched battery life, a beautiful 13-inch screen, and fantastic battery life, the Pixelbook Go is a go-to for college students, as well as the ultimate travel companion for those who need to take their work on the go.

Why you should buy this: It’s the best Chromebook for under $500.

Who it’s for: Students, families

Why we picked the Lenovo Chromebook Flex 5:

Laptops under $500 are pretty rare, but Chromebooks under $500 are a dime a dozen. None hold up as well as the Lenovo Chromebook Flex 5, though. It’s a 13-inch laptop that’s highly portable at just under three pounds in weight. It’s a fairly rigid and well-built laptop, unlike a lot of the plasticky options out there, with a quality backlit keyboard.

Its best feature, though, is the performance. Many Chromebooks come with underpowered processors that will suffer under heavier loads, such as video conferencing or having lots of tabs open. Not the Lenovo Chromebook Flex 5. It comes with the option for a 10th-generation Intel Core i3 processor — the same one that you can find in many Windows 11 laptops. Because of how light Chrome OS is, the Lenovo Chromebook Flex 5 feels snappy and speedy, regardless of how many tabs you have open.

Of course, the Lenovo Chromebook Flex 5 also comes with a 360-degree hinge and a touch screen, making it as good for binging Netflix and using Android apps as it is for getting work done.

Why you should buy this: It’s the best budget Chromebook for under $300.

Who it’s for: Chromebook shoppers on a budget.

Why we picked the Samsung Chromebook 4+:

You can buy a Chromebook for under $200, but you’ll likely be disappointed by what you get. The displays will be dim and low resolution, the chassis will be ugly, and the performance will suffer. The Samsung Chromebook 4+ costs a bit more but is still a highly affordable laptop.

With thin bezels around the screen and a silver MacBook-like aesthetic, you’ll be hard-pressed to find a laptop this attractive at this price. It’s even quite lightweight for a 15-inch laptop at just 3.75 pounds. Inside you’ll find a Celeron N4000 processor, 4GB of RAM, and 64GB of storage (a good example of a laptop you may want some external storage for).

Of course, there are compromises. The Samsung Chromebook 4+’s screen is 1080p, but it’s not bright, and the colors are saturated. The MediaTek processor is also nothing to brag about. But if it’s value you’re interested in, you won’t find a better option.

Why you should buy this: It’s the best 2-in-1 Chromebook.

Who it’s for: Students, professionals, and anyone in between.

Why we picked the Lenovo IdeaPad Duet:

Google has worked hard to make Chrome OS work as a tablet as well as it does as a laptop. All Chrome OS devices already come with Android apps, but Google has continued to improve the touch-only tablet experience. It can’t compete with the iPad yet in terms of software, but it has improved considerably.

In terms of hardware, no device has been able to compete with the Surfaces and iPads of the world quite like the Lenovo Chromebook Duet, though. The price is the obvious appeal, starting at just $279. That comes in cheaper than both the iPad and the Surface Go 2, especially since the kickstand cover and keyboard come bundled in. Because the proliferation of cheap Android tablets has died down, the IdeaPad Duet is one of the few solid tablet options in this price range.

Why you should buy this: It’s a larger alternative 2-in-1 to the Chromebook Duet.

Who it’s for: Chromebook users who want a top-notch 2-in-1 with a great display and performance.

Why we picked the Acer Chromebook Spin 713:

The Acer Chromebook Spin 713 offers up a larger and considerably more expensive alternative to the diminutive Chromebook Duet. But that’s okay — it offers a lovely 13.5-inch display in the productivity-friendly 3:2 aspect ratio and with a high resolution of 2256 x 1504. That’s well-worth the extra real estate.

It’s also a very fast Chromebook, with our review model featuring a 1oth-gen Intel Core i5-1035G7 CPU — plenty fast for the light and efficient Chrome OS. It’s the first Intel Evo-certified Chromebook, and it’s also the first with support for Thunderbolt 4. The laptop took everything we threw at it and kept chugging along. It’s also designed as well as it performs, with a solid chassis and a very usable 360-degree convertible format.

Why you should buy this: It’s the best premium Chromebook.

Who it’s for: Professionals, those who want serious power in their Chromebook.

Why we picked the Asus Chromebook Flip C436:

Premium Chromebooks have had a resurgence, offering higher-end build quality, faster performance, and even high-resolution screens. The Asus Chromebook Flip C436 is the best example of this new crop, featuring a supremely portable design with its tablet mode and a premium finish. From the all-aluminum chassis to the 2.5-pound weight, you could easily mistake the Flip C436 for a $1,000 Windows laptop — an accomplishment for a Chromebook laptop.

Under the hood, the Asus Chromebook Flip C436 includes a 10th-gen Core i3 processor, which is plenty of power for Chrome OS. The one competitor to this Asus is the Samsung Galaxy Chromebook 2. It’s even sleeker than the Flip C436, but it upgrades the display up to 4K if you are willing to pay for such an advanced Chrome OS device — we like the Flip’s mix of high-end features with a somewhat lower price.

How we test Chromebooks

When laptops enter our labs, they undergo a torturous battery of tests intended to give us a look at how each one will perform in a variety of situations. We want to define their limits, find out what they can do in everyday use and how they perform when they’re pushed.

We test individual components like the display, the CPU, GPU, and hard disk, using specific benchmarks like Primate Labs Geekbench 5 and Cinebench R23 to see how they stack up against competitors. We test for speed, reliability, and most importantly, we just spend a lot of time with each laptop.

You can find out how individual components work on their own by checking out manufacturer specs, but we test notebooks as a whole as well. We don’t just want to find out how fast each component is; we want to see how they complement each other and how they perform as a package. That way, we can give you a fully-rounded recommendation.

Do you need a Chromebook?

While they have plenty of admirable qualities, Chromebooks aren’t for everyone. Some users will be frustrated by their lack of functionality, especially when transitioning from Windows 10 or MacOS. Others might not even notice that Chrome OS is a bit more limited than traditional operating systems. If your internet speed is less than stellar, you may also run into frustrations with a Chromebook.

The way you perceive a Chromebook’s performance depends mainly on how you use your current laptop or desktop. If you need to run specialized applications like Photoshop or Illustrator, for example, Chrome OS may fall short. Similarly, if you need the Microsoft Office Suite and can’t settle for Google Docs, a Chromebook probably isn’t for you. On the other hand, it might be the perfect solution for people who mostly surf the web or stick to other online tasks. Knowing how you use your current laptop or PC can help you decide whether Chrome OS can handle your regular activities.

There are also caveats with streaming content — like Netflix — that are worth considering. The ability to download episodes of your favorite show could be a deciding factor, though.

Overall, Chromebooks are devices that excel at general-purpose use. Think of a Chromebook as a slightly more robust tablet or a big smartphone with a keyboard. If you can’t perform a function in a web browser or Android app, a Chromebook probably can’t manage it, either. That said, if you need an affordable mobile device to bridge the gap between a desktop and your smartphone, a Chromebook might be for you.

Are Chromebooks safe to use?

If you’re worried about malware and viruses, then yes, Chromebooks are very safe to use. Google created and maintains Chrome OS to be a safe environment for work. That includes built-in sandboxes, verified boot sequences, dependable encryption — and cloud syncing so that you won’t lose data. It can’t fix user error — downloading viruses off a sketchy website or responding to phishing emails will still cause trouble — but it’s very secure compared to other options.

Chromebooks are popular for their cloud-based options, but you can use them with offline apps. Make sure that apps like Gmail are set to offline modes. Google Drive can also easily be used offline and will update when you connect again.

Chrome OS isn’t the most robust operating system around, but it gets the job done for Chromebooks by providing the essentials such as web browsing, word processing, and browsing basic file types. But sometimes, you need more than a Chromebook provides. Does that mean you should jump ship or skip over Chromebooks entirely? Not anymore.

Starting in 2017, every new model of Chromebook supports the Google Play store and can run Android apps. You’re no longer limited to the Chrome ecosystem, and you can get just as much functionality out of your Chromebook as you could out of an Android phone or tablet.

Some earlier models also feature Android integration. For a full and continually updated list, you can check here. To find out how to install Android apps on your (compatible) Chromebook, check out the official instructions from Google here.

What are the pros and cons of Chrome OS?

Chrome OS is speedy, has a lightning-fast startup, and is right at home in the Google ecosystem which means it works great with all your favorite Chrome extensions and Google apps.

However, limited RAM on many Chromebooks can cause issues, and Chrome OS doesn’t support everything. If you need to run specialized applications like Photoshop or Illustrator, for example, Chrome OS may fall short. Similarly, if you need the Microsoft Office Suite and can’t settle for Google Docs, a Chromebook probably isn’t for you.

On the other hand, it might be the perfect solution for people who mostly surf the web or stick to other online tasks. Knowing how you use your current laptop or PC can help you decide whether Chrome OS can handle your regular activities. Just keep in mind that download space is generally quite limited on Chromebooks, so Chrome OS is designed to run things online, meaning you’ll need a reliable internet connection and bandwidth.