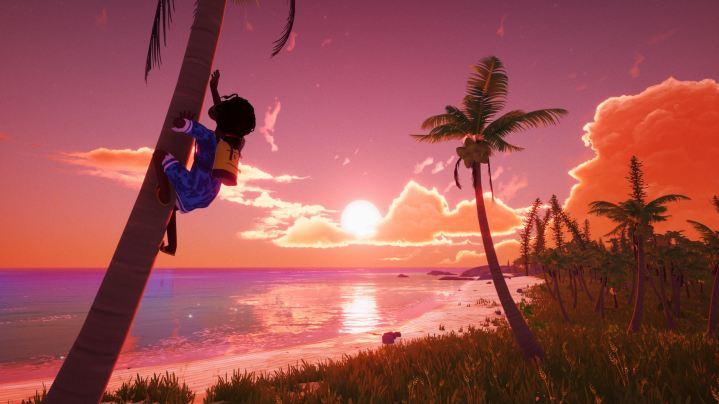 There are many big-budget games to look forward to in 2023, like Starfield, Suicide Squad: Kill the Justice League, and The Legend of Zelda: Tears of the Kingdom. But after going hands-on with a much smaller indie title, I have a new most anticipated title of 2023. The game in question is Tchia, a vibrant, cheerful, and free-flowing open-world game about a girl exploring a tropical archipelago in the Pacific Ocean.

Tchia first caught my attention in a hands-off preview of Kepler Interactive’s Gamescom lineup last year, but it took me going hands-on to really understand the magic of Tchia. A freeing open-world game in the same vein as The Legend of Zelda: Breath of the Wild, Elden Ring, or Sable, Tchia lets players loose on beautiful islands in the Pacific and gives them tools to explore by climbing, gliding, possessing animals and objects, and sailing wherever they want. Its deep understanding and respect for the culture it represents enhance the experience too. If you’re wondering what indie darling will wind up becoming this year’s critically acclaimed game of the year dark horse, you’ll want to keep an eye on Tchia.

Tchia is an open-world game following a little girl (named Tchia) trying to find her missing father on an archipelago inspired by New Caledonia, a tropical archipelago in the Pacific Ocean where some of the game’s developers are from. While players have the stamina to climb up buildings and trees, swing from them, and even swim, dive, and sail around these islands, they can also soul-jump into lots of different animals and objects. These each add even more gameplay gimmicks that enhance exploration and help Tchia solve puzzles.

I had the chance to play some main story missions during my preview where Tchia befriends a young girl and explores one of the game’s biggest islands, completing various objectives and even hunting for treasure. The story was fairly light in what I played, but the gameplay really shined. Although I had some objectives, it was just as fun to climb up the trees near the starting town and fling Tchia into a glide to travel a longer distance.

I could then let go of that glide to do tricks in the air or soul-jump into an animal, allowing me to explore the world in a new way. Tchia makes exploration feel fantastic, as you’ll immediately feel like you have all the tools to make this world your oyster.

Oh, and did I mention you can play the ukulele? Because Tchia features a fully playable ukulele.

At a couple of narrative beats during my preview, I encountered rhythm-game-like segments as Tchia performed specific songs, but I could also play the ukulele at any time while I was exploring if I wanted to. While you can play whatever you want, specific melodies have additional effects, The Legend of Zelda: Ocarina of Time style. The results of these tunes range from simply changing the time of day to giving Tchia a buff that allows her to breathe underwater infinitely.

Players can earn new songs to use with the ukulele by completing rock-balancing puzzles scattered across the open world. That’s just one of the many things players can do while venturing across New Caledonia.

Learning from the best

While there are specific story objectives to complete, Tchia is also structured in a way that allows players to fully immerse themselves in a foreign landscape. Like Sable or Breath of the Wild, there’s always something within your sightline that’ll encourage you to explore. Tchia goes one step further by pulling back on the map’s utility. When you pull up the map, you’ll only get a vague indication of where Tchia is on it. A compass will point you towards main objectives or marked points on your map, but this is optional as players can experience Tchia with minimal UI outside of the stamina and soul-jump meters.

Even after I completed all of the narrative content in my demo, I spent lots of time continuing to explore this big island. I wanted to take in the atmosphere of each new area and find Stamina Fruit, totems to increase my Soul-Jumping meter, and more. Tchia is shaping up to be a lot of fun, whether you mainline the story or ignore all of the objectives and UI and explore the world instead. There’s even a very involved sailing component that’ll let you explore the rivers and seas, although I mostly stayed on land during my playtime.

The only part of Tchia that hasn’t quite clicked yet is its combat. The titular character can fight magical ribbon-like creatures if she comes across their camps in the open worlds. These fights often boil down to flinging flammable objects at enemies before they drain your stamina. Unlike other open-world games with a similar meter, stamina in Tchia doubles as a health bar. While this works well to pace exploration between moments of excitement and calm, it also limits what’s possible in combat.

Thankfully, this is a minor piece of Tchia from the demo I played, and the joyous exploration makes up for combat so far. The Legend of Zelda: Breath of the Wild established, and Sable and Elden Ring affirmed, that this new age of open-world games is all about giving players the freedom to explore vast open worlds in their own ways, enabling emergent gameplay moments and ensuring an experience that is different for every player.

Tchia is the next game to embrace that formula. Based on my time with it thus far, it avoids feeling repetitive thanks to its soul-jumping mechanics and a unique setting that’s never been explored this deeply before in a game. Though I originally read it as an indie novelty, Tchia’s undeniable charm and magical world have turned it into my most anticipated game of 2023 — even over The Legend of Zelda: Tears of the Kingdom.