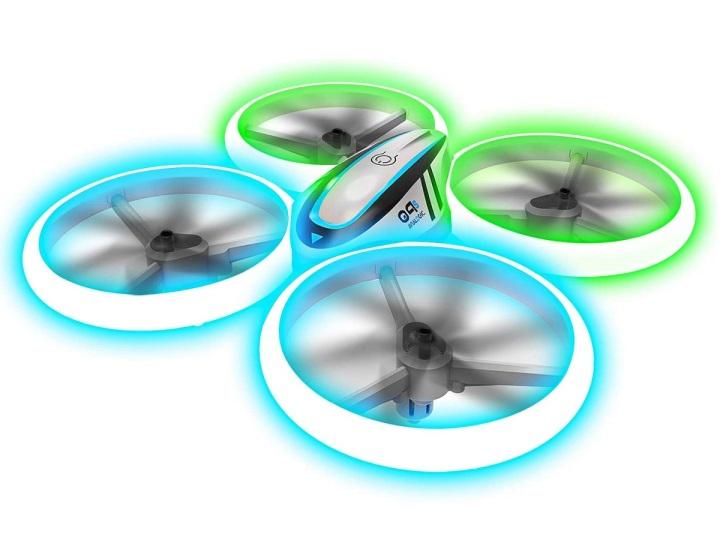 Drones have entered the mainstream partly because of their practical applications, but mostly because they’re just plain cool. The overall prices of drones have dropped, but you can get one for even cheaper by taking advantage of the drone deals that are available from the various retailers. With more people wanting to buy a drone because they’re now more affordable, discounts often don’t last long because stocks run out. We’ve gathered some of the top bargains for drones that you can shop right now, but you need to finalize your purchase as soon as you can because they may disappear at any moment.

The Hasakee Q9s, with its bright LEDs that emit vibrant neon green and blue light throughout its frame, is designed to be simple enough to be operated by children. The drone features one-click take-off and landing — pressing the button on the controller lifts the drone into a set altitude, while pressing it again brings it back to the ground. This makes it easy to maneuver for beginners, especially when combined with Headless Mode where the drone will fly upwards, downwards, or in any specific direction that you press on the controller. The Hasakee Q9s also comes with propeller guards to ensure safe flights, as they will prevent the propellers from damaging objects and hurting people. There are three speed settings to choose from in the drone’s controller, and it can fly up to 16 minutes at a time with fully-charged batteries.

The Radclo Mini Drone is equipped with a 1080p manually adjustable lens that you can operate through its accompanying app. You can enjoy a real-time panoramic view through the drone’s camera, in addition to taking pictures and videos. The drone takes off and lands with the push of a button, and its Altitude Hold function will keep it at a certain height for easier control and for shooting higher-quality footage. It offers three speed modes, a 360-degree flip command, and Headless Mode that makes it even simpler to fly with its controller as you won’t have to think about the direction that the drone is facing. Inside the Radclo Mini Drone are a pair of 800 mAh batteries, which can keep it up in the air for up to 22 minutes, and once you’re done with it, the done can conveniently fold into its carrying case.

The Holy Stone HS440 is equipped with a 1080p camera that you can adjust within 90 degrees through its remote control or app. The small and foldable frame packs a lot of helpful features for beginners and experts alike, including Headless Mode that follows the presses on the controller instead of moving depending on the direction it’s facing, Circle Fly to rotate around the subject of your footage, and Auto Hover that keeps the drone at a certain height. Inside the drone is a powerful modular battery that lasts up to 20 minutes on a single charge, which is more than enough time to explore your surroundings and shoot videos. The Holy Stone HS440 also comes with a carrying case to keep it protected while you’re moving to your next location.

For even clearer photos and videos, go with the Vantop Snaptain SP680, which is equipped with 2.7K Ultra HD camera that can take videos at 25 frames per second. The drone offers multiple flight modes such as 360-degree flips, high-speed rotation, and circle fly, and you can have complete control of its movement with trajectory flight that allows you to draw its course on its smartphone app. However, learning to fly the Vantop Snaptain SP680 remains very easy, as it takes just one tap for take-off, landing, and returning to your location, and there’s also Headless Mode that’s very helpful for beginners. The drone can fly in three speeds, it can run for up to 15 minutes for each battery, and you can use voice commands and gesture control to operate the device.

How to choose a drone

The right drone for you depends on what you are looking to do. A drone — especially those that are under $250 or so — will offer the fewest features and may lack some functionality that might not make it the best solution for you.

Generally (and this is not a hard and fast rule), a drone typically features 720p video and a relatively low frame rate, usually 30 frames per second. While for most of us this will be fine, the video will lack that cinematic smoothness. Stepping up to a midrange drone (typically in the $250 to $750 range) gets you 1080p video and often at 60fps, which results in higher-quality video.

Most modern higher-end drones offer 4K video, but you’ll likely need to spend north of $1,000 to get 4K 60fps video. If video quality is a primary concern, expect to pay more.

A drone will also lack other useful features, including tracking capabilities, and video and drone stabilization. In ideal flying conditions, this won’t be an issue. But you’ll want these features if you plan to fly in a variety of conditions or allow it to operate without a great deal of user input.

We’ve also noticed many cheaper drones either lack obstacle avoidance or aren’t as good as more expensive drones. If you’re flying in wide-open spaces, you won’t have much of an issue here. But if you plan to fly in areas with obstacles nearby, you’ll want to ensure the drone you select has sufficient obstacle avoidance capabilities.

All drones will make some noise. Most describe it as a buzzing sound, kind of like a bee. The propellers are spinning at an extremely high speed, and this is what causes that noise. It’s most noticeable when you’re closest to the drone, but you’ll barely hear it if at all once it is higher in the air.

Can you fly a drone at night?

Most drones can be flown at night, although we wouldn’t recommend doing so until you’ve had a good deal of experience. We recommend keeping your drone within eyesight when flying at night — and drones that can operate at night include lights so that they can be seen during night flying.

Do remember that most drones do not have night vision capabilities, so the video that you take during night flying will only be illuminated by any ambient lighting available, such as moonlight, street lighting, and so forth.

Can you fly a drone in the rain?

Most drone manufacturers recommend against flying your drone in the rain. Most drones are neither waterproof nor water-resistant, so even small amounts of water could do damage to your drone, especially to the motor and battery. The moisture causes a short circuit, which will cause your drone to stop functioning with little or no warning. Thus as a general rule, do not fly your drone in the rain, fog, or excessively humid conditions.

If you’re caught in these conditions, land as soon as possible and get your drone somewhere dry, disconnect the battery, and allow it to dry. You may also want to shake the drone itself gently to get water out of the interior housing and let that dry as well. Use similar techniques to drying out a wet phone to dry out your drone, and the first time you fly it afterward, take some time to test out the drone at a low altitude before flying it normally again.

Do drones have to be registered?

The Federal Aviation Administration requires that you register your drone based on how you plan to fly it and mark your drone with your given registration number. Any drone weighing more than 0.55 pounds (250 grams) and less than 55 pounds must be registered, which covers just about every drone currently sold on the market. This registration must be renewed every three years.

You must also carry proof of registration at all times when flying, and are prohibited from flying for commercial purposes under the terms of the license. Drone flight is only permitted below 400 feet in altitude and Class “G” or uncontrolled airspace. It is your responsibility to follow these rules.

Some states require drone pilots to follow additional regulations, so be sure to check the laws of the state you are flying in before you take off.

Do you need a license to fly a drone?

At this time, there is no license required for recreational or hobbyist drone pilots. However, flying for commercial purposes may require additional certifications.