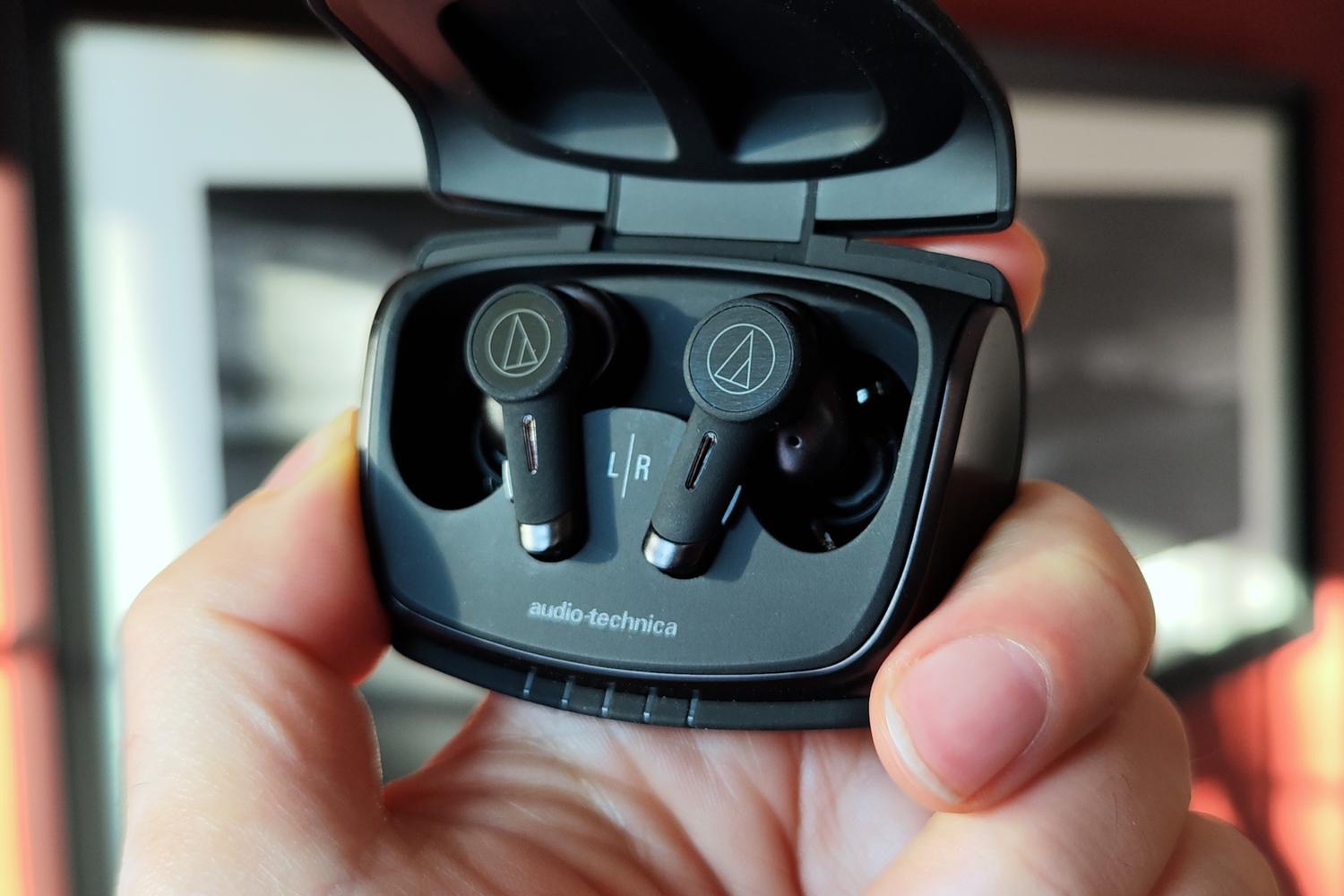 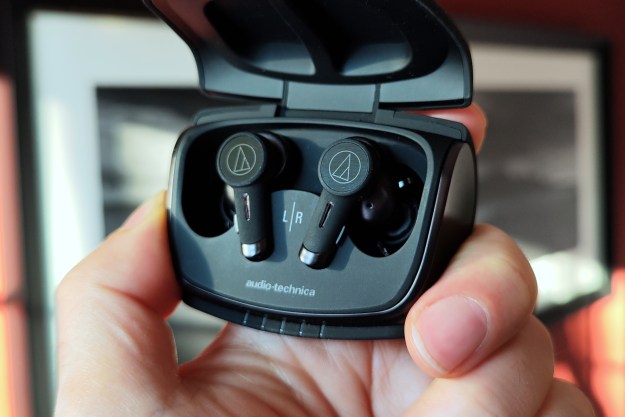 “The Audio-Technica ATH-TWX9 are stylish ANC earbuds for discerning listeners.”

Comparing wireless earbuds to Apple’s AirPods has become so commonplace that it’s kind of lost all meaning. But now and then a product comes along that is clearly trying to woo would-be AirPods buyers, like the Audio-Technica (A-T) ATH-TWX9. At $299, they’re the most premium wireless buds A-T has ever created, with a similar shape and many similar features to Apple’s $249 AirPods Pro Gen 2.

If Apple’s ubiquitous earbuds have tempted you, you owe it to yourself to consider the ATH-TWX9. Here’s why.

Glossy white plastic — synonymous with the AirPods — might look good and even feel good in your hands. But it comes with practical drawbacks. For one, it’s slippery. I’m not the only one who has struggled to extract a set of AirPods Pro from their charging case without dropping a bud. That glossy finish also can prevent them from staying firmly anchored once they’re in your ears. In this respect, the TWX9 are the anti-AirPods.

Their textured matte finish, which covers most of the earbuds and the high-touch surfaces of the charging case, provides just the right amount of grip without sacrificing any comfort. Fair warning though: it’s an absolute dust and fingerprint magnet. These photos are what they look like after I tried my best to remove that stuff both in real life and in software.

I’ve never come across a set of earbuds that fit me as comfortably and snugly as the TWX9.

The case itself, while not as pocketable as that of the AirPods Pro, is a study in good ergonomics. The lid opens easily and provides completely unfettered access to the earbuds, and you can charge it wirelessly or with the included USB-C cable.

The TWX9 also look the part. With their subtle, satin metallic accents and discreet Audio-Technica logos, the earbuds pull off a tricky balancing act by looking both sleek and sophisticated. Even the five-LED light bar on the front of the case feels premium, giving you an at-a-glance confirmation of case/earbuds charge levels.

Speaking of the LED lights, a few moments after replacing the buds in the case, those LEDs will turn purple and start to animate in an outward pattern. That’s how you know the case is attempting to kill off any surface bacteria with UV light. Does it work? I haven’t a clue. But it sure looks cool.

I’m pretty lucky when it comes to earbuds. My ears just seem to accommodate most sizes and designs without many problems. But I’ve never come across a set of earbuds that fit me as comfortably and snugly as the TWX9. Once I twisted them into position, it was clear they weren’t going anywhere — the portion that sits in the bowl of the ear might as well have been 3D-printed for my ears. And even after hours of use, I felt no need to remove them.

Regardless of your chosen genre, the TWX9 provide a rewarding listening experience.

The default eartips created a perfect seal right from the get-go, but if they hadn’t, Audio-Technica includes an astonishing collection of 12 additional sizes and shapes, in varying widths and lengths.

With an IPX4 rating, the TWX9 aren’t exactly built for punishing workouts, but they’ll easily cope with sweat and some rain as long as you gently wipe them clean afterward.

Most wireless earbuds give you a single control interface — a touch/squeeze sensitive area or a physical button. The TWX9 give you both: a button on each stem and a touch panel on each logo-sporting end cap. That sounds like Audio-Technica is letting you choose which style of input you prefer, but that’s not quite the case.

The stem buttons have preassigned commands for volume, playback, and calling, and these are grouped by earbud — one side gets play/pause and track skip forward/back, while the other gets volume up/down and quick hear-through mode. Both sides can handle calls. You can switch these groups from one ear to another within the Audio-Technica app, but you can’t pick which commands are controlled by which click combinations. For example, a double-click in the play/pause group is always track skip forward.

By default, the touch sensors are used to control active noise cancellation (ANC) modes, but you can change just the left sensor to trigger a voice assistant (with a choice of your phone’s native AI or Amazon’s Alexa) or get battery level info via voice feedback. You can also disable the touch sensors completely, but this means you’ll have to control these features from your phone instead.

Learning the commands is intuitive, and the controls themselves work flawlessly. But I’m surprised that the customization is so limited, especially when it comes to ANC. It must be toggled through three modes — ANC, transparency, and off — with no ability to select from just two modes. Perhaps A-T will see fit to change this with a future firmware update.

The buds also have wear sensors, which can auto-pause and resume your music. They’re very quick, but you can disable them if you wish.

Bluetooth Multipoint is a huge convenience when your days are spent bouncing from one device to another, and the A-T app makes it easy to use. One screen lets you see all previously paired devices, add a new device to the list (up to eight), and manage which of these devices are connected to the TWX9 at any given time. No more messing around inside Bluetooth menus!

Another benefit of this arrangement is that if you’re connected to a computer and a smartphone simultaneously, you can continue to adjust the earbuds’ settings from the A-T app on your phone even while listening/working on your PC.

Unfortunately, the charms of multipoint were deeply undermined by the TWX9’s tendency of repeatedly alerting me that it had disconnected and reconnected to … well, it was never clear which device was causing problems. But this happened more than once and it was so annoying I had to go back to a single connection. Curiously, when I reached out to A-T with feedback on this issue, I was told that when using multipoint, communication tends to deteriorate, and there is a possibility of disconnection, “even if there is no obvious interference or the device is (sic) at a long distance.”

That may be true, but this is the first time I’ve ever encountered this particular problem when using Multipoint.

Audio-Technica is known for its sound quality above all else, and the ATH-TWX9 keep that legacy alive. The A-T app has a customizable EQ, but I was so happy with the sound signature on these buds right out of the box that. once I satisfied myself that the EQ function worked, I turned it off and never looked back.

A-T monitor headphones like the ATH-M50x are praised for their flat or neutral EQ. But the TWX9 present a slightly more bass-forward balance, which gives these earbuds a heightened sense of immersion.

The TWX9 go above and beyond when it comes to ANC.

All of the words that reviewers use to heap praise on good headphones apply: punchy and resonant bass, detailed midtones, and crystal-clear highs are all evident from the start. The soundstage is rendered with precision. but stays very focused on the horizontal plane, even when playing 360 Reality Audio or Dolby Atmos Music tracks.

Regardless of your chosen genre, the TWX9 provide a rewarding listening experience. On a more technical level, they support up to 24-bit/96kHz playback when used with an aptX Adaptive-capable phone (Android only), but this was one of the few times I’ve struggled to hear a difference between AAC on an iPhone and aptX Adaptive on Android.

The TWX9 go above and beyond when it comes to ANC. In addition to having five discrete ANC modes for varying situations like flying in an airplane, traveling on a train or being near traffic, in an office, or at home, the A-T Connect app lets you personalize the way these modes work. A calibration process — which only takes a few seconds — analyzes how the earbuds fit your ears and adjusts accordingly. Finally, if you don’t want to use the five preset modes, you can pick an optimized mode that will take a listen to your current surroundings and pick the best level of ANC automatically. You can repeat the optimization any time from the earbuds with a long press on the right touch sensor.

I was content to stick with the optimized mode. It produced very good results each time, whether I was outside or indoors, but there was a very faint hiss when no music was playing.

Hear-through (transparency) mode worked well for hearing other sounds around me, but my own voice still sounded muffled, which kept interactions from being as natural as they are when using the AirPods Pro.

A-T claims a 6-hour battery life for the ATH-TWX9 when playing at moderate volumes with ANC enabled. You’ll get two full recharges in the charging case, which brings the total to around 18 hours. That’s … well, it’s not great. For this price, I’d prefer to see at least an AirPods Pro level of performance (6/24), but preferably a lot more.

Will it matter to you? That depends entirely on how much listening you do every day. For frequent travelers, it could be a problem. For an average daily commute and some time at the gym, you’re probably fine.

These earbuds are terrific for phone calls and Zoom meetings — as long as you’re indoors. The mics reproduce your voice faithfully, with a quality that comes close to a dedicated wired mic. If your phone supports Snapdragon Sound, it should be even better thanks to Qualcomm’s enhanced bandwidth for voice.

Outdoors is a different story. Wind and loud sounds both play havoc with the mics. I’ve experienced this a lot: as the environmental noise cancellation software attempts to block these unwanted sounds, it’s your voice that ends up being collateral damage, fading in and out as the algorithms try (and fail) to figure out what should be kept and what should be killed.

There’s an optional sidetone adjustment that is meant to let you hear your own voice while on calls (to keep you from shouting). As with the transparency mode, it helps, but it’s not as effective as on the AirPods Pro.

Despite some Bluetooth quirks that I’m confident will be resolved with a future firmware update, and slightly anemic battery life, the Audio-Technica ATH-TWX9 are a worthy AirPods Pro alternative, offering a more comfortable and secure fit, as well as fabulous sound quality.