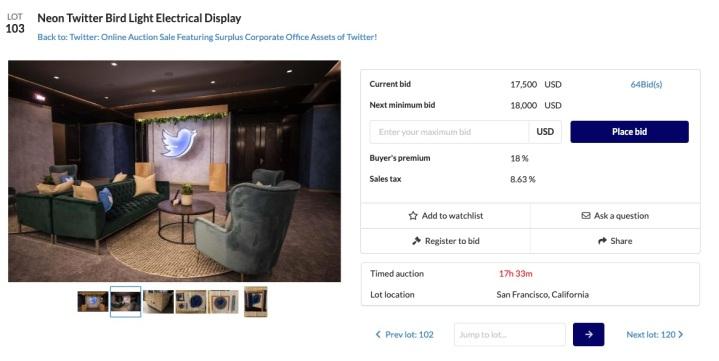 If you’re looking for a strong centerpiece for your lounge or living room, then a statue of Twitter’s iconic bird motif could be just the ticket.

The social media company is auctioning off the bird statue — along with a ton of other gear — from its headquarters in San Francisco.

Since acquiring Twitter in October 2022, Elon Musk has made a priority of streamlining the company, laying off nearly half the workforce and taking other measures such as ending free meals for the remaining staff.

The auction, which ends late Wednesday, features 631 lots and includes standard office kit such as chairs (there are a lot of chairs), desks, and shelf units.

There’s plenty of office equipment, too. The numerous laser projectors, for example, have a starting price of around $1,300. Other lots include Google 55-inch Jamboard Whiteboard Displays ($600), 58 Apple MagSafe power adapters ($2,200), and, perfect for a noisy workplaces, a soundproof office phone booth ($3,700). However, there’s no sign of the sink that Musk was seen carrying into Twitter’s headquarters shortly before he closed the deal to acquire the company last year.

With those free meals gone, the kitchen is being cleared out too, with related lots featuring a Unic Tango Automatic Espresso Machine ($3,3000), a CoolShack Electric Smoker ($650),a Steam Jacketed Tilting Kettle ($1,050), and a Montague Gas Deck-type Pizza Bake Oven ($2,600), among a slew of other items.

When the auction was announced by Heritage Global Partners last month, representative Nick Dove insisted it wasn’t an effort to claw back some of the costs from Musk’s $44 billion acquisition.

“If anyone genuinely thinks that the revenue from selling a couple computers and chairs will pay for the mountain there, then they’re a moron,” Dove said.