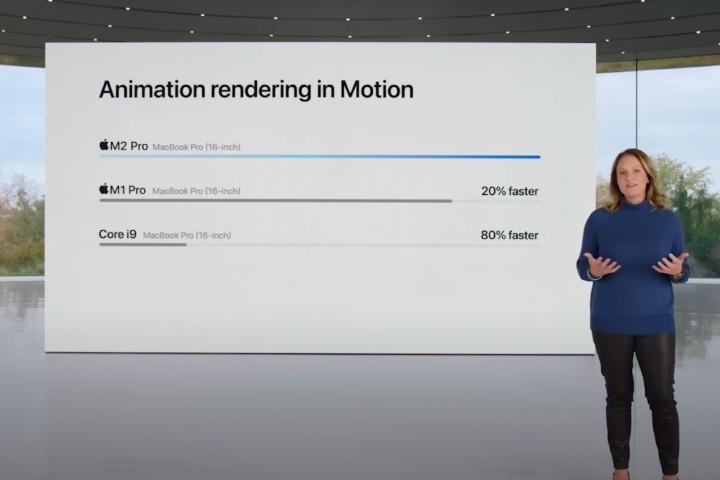 The 14-inch and 16-inch MacBook Pro are my favorite laptops of the past couple of years. These computers are the real deal, and have no real weakness — outside the high price, of course. But you absolutely get what you pay for.

And don’t get me wrong. I’m excited about the announcement of the M2 Pro and Max MacBook Pros, which launched unexpectedly just yesterday. But these are not “new” laptops, hence the unceremonious nature of the surprise launch. That means all the changes are internal, and the list of new features is fairly small.

They take the M1 Pro and Max models and bring them up to the latest M2 speeds, which we first saw in the M2 MacBook Air last year. These are faster chips, no doubt, and Apple says there are some meaningful gains on the graphics front over last year’s model. Overall, Apple claims the M2 Max has 30% faster graphics than the M1 Max, which is a substantial gen-over-gen upgrade.

In actual applications, the company says the new MacBook Pros are up to 20% faster at rendering titles and animation in Motion, which is Apple’s own version of After Effects. Meanwhile, compiling in Xcode is 25% faster and image processing in Photoshop in 40% faster. These are all just claims, of course, and no one has been able to confirm them with review samples just yet.

But even if those performance jumps prove to be legitimate, the truth is that most people just don’t need that extra bump in performance. I know — these are supposed to be professional machines, and if your job depends on it, you’ll take any amount of bump in faster rendering or compiling. But a lot of people buy these laptops as general purpose machines first and content creation tools second. Because the M1 Pro represents the cheapest “discrete level” graphics you can get on a MacBook, it attracts a lot of people in that group, especially the cheaper 14-inch model. In other words, this group of people want something with some decent power, but probably won’t benefit much of a change between the M1 Pro and M2 Pro.

All that is to say, if that’s going to be true for you, you’re better off saving some money and picking up the previous-gen MacBook Pro — whether that’s the M1 Pro or M1 Max. These are still highly capable machines, and as Apple highlights, they still have the incredible display, speakers, keyboard, and trackpad the machine is known for.

But here’s the catch: Apple hasn’t kept the previous-gen model around in the lineup. And if you look at retailers like Amazon, the M1 Pro and Max MacBook Pros aren’t getting a big discount just yet. I expect this to change, however, once the new models are available, which is just next week. So, I’d recommend waiting until next week to check out how far these prices fall. I’m hoping to see some major drops even in the base configurations.

As for now, though, Apple is offering a refurbished version of the 16-inch M1 Max model, dropping the price by over $600. It’s a high-end configuration, though, and it’s currently the only one available through Apple’s refurbished program. Again, we hope to see more significant price drops soon, but that’s all we have for now.

So, if you’re not someone who really needs the generational bump from the M1 to the M2, there’s little reason to get one of these new MacBook Pros. Instead, save some money and wait for a likely incoming price drop next week on the previous generation.