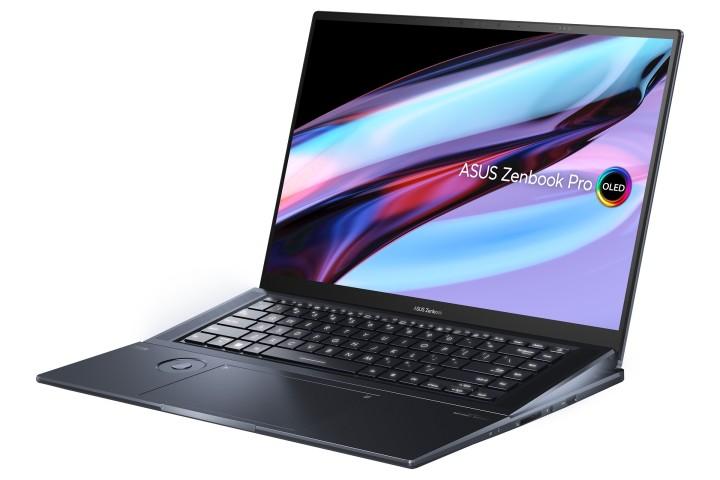 Apple’s MacBook Pro 16 is one of the best laptops you can buy today, with an elegant design, beautiful display, outstanding performance, and industry-leading battery life. If you’re a creator, it’s been the go-to laptop since its introduction in late 2021. It’s important to note that Apple has announced new versions of the MacBook Pros that upgrade to the M2 Pro and M2 Max CPUs, which we haven’t benchmarked yet, but they are certain to be faster than the previous M1 Pro and Max models.

The Asus ZenBook Pro 16X is a strong competitor, though, being nearly as fast in creative tasks and offering a host of innovative features. The newest ZenBook Pro 16X, just introduced at CES 2023, adds in even more, making it even more competitive. Can the update help it take over the top spot for creators?

The MacBook Pro 16 is simple in its design, with an all-aluminum CNC machine unibody chassis that’s a bit boxy. However, it exudes elegance and quality, with an incredibly rigid body that makes it feel like one of the best laptops ever made. The display bezels are thin, with only a notch in the center to accommodate a 1080p webcam breaking up the look. You can get it in silver and Space Gray, and either way, you’re getting a laptop that’s uncomplicated but incredibly well-built.

The ZenBook Pro 16X is the polar opposite. When closed, its all-metal chassis is an example of today’s minimalist aesthetic, with simple lines and only the new Star Trek-like Asus logo on the lid. But open the display and things get very different. To begin with, the keyboard lifts up at an angle, which Asus calls its Active Aerodynamic System Ultra mode thatprovides more airflow to the inside of the chassis and propsthe keyboard up at an angle.

The touch-sensitive Asus Dial sits next to the touchpad, allowing customized controls in apps like Adobe’s Creative Suite. And the keyboard supports per-key White RGB backlighting and side LED lighting that reacts to system events. It’s jam-packed with features you won’t find with the more staid MacBook Pro 16.

Asus also switched to a larger haptic touchpad for the newest ZenBook Pro 16X, and that’s a welcome change.

Speaking of the keyboard, we haven’t tried this version’s yet, but the previous generation had large keycaps with plenty of spacing and light and snappy switches, but the angle took a little getting used to. The MacBook Pro 16 uses Apple’s Magic Keyboard, which is shallower, but has excellent keycaps and spacing, as well as the more precise and consistent switches available on a keyboard today.

The MacBook Pro 16 also has a huge Force Touch haptic touchpad that sets the standard for precision and comfort. Asus also switched to a larger haptic touchpad for the newest ZenBook Pro 16X, and that’s a welcome change. Again, we haven’t tested it, but it’s large enough (though not as large as the MacBook Pro 16’s) and embeds Asus’ NumberPad 2.0 LED numeric keypad with haptic feedback.

Both laptops have excellent connectivity, with the MacBook offering an additional Thunderbolt 4-enabled port and a MagSafe power connector. The ZenBook Pro 16X has faster wireless connectivity, and both laptops feature 1080p webcams. The Asus utilizes facial recognition for passwordless login, while the MacBook uses the Touch ID fingerprint reader.

The MacBook Pro 16 can be equipped with up to the M2 Max CPU, which is a 12-core ARM CPU with 38 GPU cores. It’s an incredibly powerful laptop that, in its M1 Max incarnation, is the fastest we’ve tested in the real-world PugetBench Premiere Pro benchmark that runs a live version of Adobe’s Premiere Pro video-editing application. The laptop excels at creative applications and can easily handle the most demanding productivity workflows. The M2 version will just be faster.

It should be interesting to see how the ZenBook Pro 16X competes in performance. We tested the previous model with a 45-watt, 14-core (six Performance and eight Efficient), 20-thread Core i7-12700H CPU and an Nvidia RTX 3060. It was 11% slower in PugetBench but significantly faster in Cinebench R23. When configured with the faster Intel 13th-gen 45-watt Core i9-13905H with the same core and thread count, but a faster Turbo Boost speed, as well as the ultrafast RTX 4080 GPU, we expect the ZenBook to give the MacBook Pro 16 a run for its money. PugetBench, and applications like Adobe’s Creative Suite, can utilize the GPU to speed up certain operations. When fully configured, the ZenBook Pro 16X might be even faster than the MacBook Pro 16. But that remains to be seen.

Notably, Asus and Intel collaborated on a unique system-on-module design that packages the CPU and RAM into one component. That shortens the distance between CPU and RAM, increases the system’s cooling efficiency, and reduces the size of the motherboard. It also made more room for the GPU components, and Asus provides up to 155 total watts of TDP to the CPU and GPU. That should maximize performance even further, and we hope that Asus sends us the high-end model to test as a more direct comparison to the MacBook Pro 16.

Apple’s new M2 chips will be faster yet, and so benchmarks will be even more important in determining which of these laptops is faster for creators.

You can’t complain about the MacBook Pro 16’s 16.2-inch 16:10 mini-LED XDR display running at 3456 x 2234 resolution and 120Hz. It provides wide enough colors (although not as wide as some displays) with good accuracy, to go with incredible brightness and deep contrast. It’s a beautiful display that’s good for creative work and has some of the best HDR support around.

The ZenBook Pro 16X will come with two display options, both OLED. The first is a 16.0-inch 16:10 3.2K (3,200 x 2,000) panel running at 120Hz, and the second is a 4K+ (3,840 x 2,400) display running at 60Hz. Both are virtually guaranteed to provide wider and more accurate colors and contrast that’s just as deep, but they’re unlikely to be as bright as the MacBook’s display. That means that they’ll be even better for creative types thanks to the wider and more accurate colors, but not as good for media consumers due to HDR that’s likely to be slightly less excellent.

Both laptops have great displays. Which is better comes down first to our being able to test a ZenBook display and then to whether the best color or better HDR is more important to you.

The MacBook Pro 16 has four speakers that provide the best sound on a laptop today. The ZenBook Pro 16X will come with six speakers total, and we can’t wait to give it a listen.

Both laptops are almost equally sized, while the ZenBook Pro 16X is a half-pound heavier. Both are portable, but you’ll feel the heft and weight in your backpack.

One area where the MacBook Pro 16 is likely to maintain its lead is in battery life. It’s an incredibly long-lasting machine for one with so much power, and the ZenBook Pro 16X is unlikely to even come close.

A ferocious battle that needs some testing to confirm

It’s hard to say which is the better laptop without reviewing the ZenBook Pro 16X. It’s possible that it will be faster than the MacBook Pro 16, and provide more creator-friendly displays. But we won’t know that until we get our hands on it. We’re also still looking to test out Apple’s latest and greatest chips; the M2 Pro and M2 Max.

Either way, both are expensive laptops (although we don’t know the ZenBook’s final pricing yet), with the MacBook Pro 16 maxing out at over $6,000 when fully configured, so it’s not going to be an easy decision. The ZenBook is a fussier laptop with more features to mess around with, and that can be a good or a bad thing. But for creators, there’s a good chance that the ZenBook Pro 16X could come out on top as a solid Windows alternative.