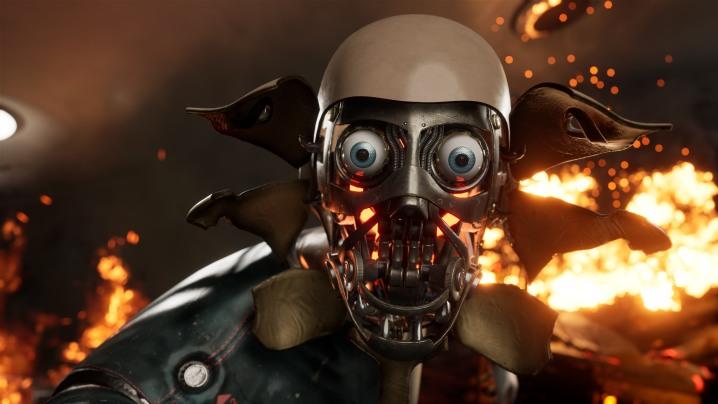 After playing the first three hours of Atomic Heart, I felt like I had a pretty good handle on what to expect. The upcoming first-person shooter felt like a clear spiritual cousin to Bioshock Infinite, trading in the 1922 skies of Colombia for an alternate history vision of the Soviet Union circa 1955. I’d wander through dark corridors, fending off rogue androids while unraveling the mystery of a utopian paradise run amok. Simple.

Moments later, a developer shot me forward into a small open world where I was hoisting spore-infected monsters into the air with the flick of my wrist and driving a car through a pack of androids like they were bowling pins. I’d barely even begun to see the full scope of the project in those first three hours.

Atomic Heart seems to pride itself on its unpredictable nature. Not even its visually eclectic trailers have really captured how much is happening underneath the hood in what’s shaping up to be an incredibly ambitious debut from developer Mundfish. Based on my few hours with it, Atomic Heart feels like the kind of game that’ll be impossible to pigeonhole. While it’ll be tempting to compare it to games like Bioshock, it’s an entirely unique creative swing for a fresh studio looking to make a name for itself. While I’m not sure if every one of its myriad of ideas will land based on my time with it, Mundfish is throwing enough darts here that it’s bound to land a few bullseyes.

Atomic Heart knows how to make an entrance. My demo begins right at the top of the game, with an introductory sequence reminiscent of Half-Life’s iconic trip around Black Mesa. This time, I’m riding down a stream on a futuristic paddle boat. It’s an idyllic vision of the future, like I’m at a Disney theme park. A friendly drone flies to me and hands me a glass of soda, which I sip while watching little slice-of-life vignettes occur next to me. It all seems too good to be true.

It is, of course. The story takes place in an alternate version of 1955 in which the Soviet Union won World War 2 and become a technological powerhouse. After creating a wonder material called polymer, the USSR was transformed into a communist paradise full of intelligent robots that live in harmony with humans. One rogue hack later, everything goes south and the machines turn into murderous monsters hellbent on killing the protagonist, an intelligence agent tasked with finding who’s responsible.

Off the bat, I’ll stress that it’s impossible to judge Atomic Heart’s political ambitions based on such a small slice. It takes some clear jabs at the concept of communism but swings just as hard at capitalism. It’s unclear early on if it’s looking to make a commentary about either, or if it’s simply interested in irreverent farce a la Far Cry. Publisher Focus Interactive admitted that it was initially hesitant to pick it up initially because of that aspect, but the label seems confident in where the final game landed tonally, which is encouraging.

“If you need any more proof that the lines between big and mid-budget are blurring, Atomic Heart seems to offer a shining example.”

Regardless of how that particular thread plays out, I already find Atomic Heart’s narrative focus compelling. While early trailers have purely emphasized action, I got a much more story-heavy experience that really let me bask in its creative alt-history universe. My first hour is particularly engrossing as it plays with an awe-inspiring scale. I gaze up at hulking statues of USSR leaders, watch a massive parade move through the streets, and get a bird’s eye view of the entire city thanks to a flying jalopy. Everything about the art design is triumphant, from its red-soaked streets to its varied robot designs.

That’s made all the more impressive by its tech, which seems like an astonishing feat for a first-time studio funded by a AA publisher. Like A Plague Tale: Requiem, its hyper-detailed visuals punch well above their weight class. More jaw-dropping, though, is that the game does not feature a single load screen. There are some clever load masks here or there, but my demo has me seamlessly jumping between the opening stream ride, a massive palace, that aerial tour of the world, and the dark corridors where the action begins to unfurl. If you need any more proof that the lines between big and mid-budget are blurring, Atomic Heart seems to offer a shining example.

While narrative is at the forefront, Atomic Heart is also an incredibly systems-heavy action game. In fact, I’d barely even understand half of it until the dev team showed me an overview video after my hands-on time. Its opening “dungeon” would have you thinking it’s a standard Bioshock-like. After getting attacked by rogue robots, I’m thrown into a dark lab and forced to sneak around corridors as I loot for materials and face robots. I can sneak up on a foe to deactivate it with a button mash, but much of my gameplay would revolve around head-on action.

My take on the action is a little skewed, as my demo was mistakenly set to “hard.” And let me tell you: it was, indeed, hard. Equipped with only an ax and a shotgun with just a few shells early on, I had to carefully duck and weave as agile androids launched a rush of deadly kicks and punches at me. I’d have to do some careful juggling as I pressed B to perform a strafing dodge and follow up with a heavy strike. Timing was everything, even on the simplest encounters, as if I was playing a punishing Souls game in first-person. I found myself naturally moving in my chair alongside my character, making combat feel particularly physical.

Naturally, the game is much more forgiving on its normal difficulty, but the top-level play did expose a few challenges with its core systems. Chaining precise moves at a fast pace in first-person isn’t exactly easy, and I often found myself dying as I backed into some geometry unknowingly and had no way of escaping a flurry of attacks. The demo was stingy with its checkpointing too, so a death would force me to sit through tutorial pop-ups again or re-loot entire rooms (which can, fortunately, be accomplished easily by holding down the loot button and hovering from object to object).

Though I struggled with parts of its melee-driven opening, I quickly learned that the first few hours aren’t exactly a full representation of the actual game — not by a long shot. When I was kicked forward to a mid-game slice, which takes players into a more open-ended hub world that almost resembles Halo Infinite’s grassy Zeta Halo, I’m given a much bigger arsenal. Here, I’m playing an over-the-top shooter that mixes gunplay with special powers. I come up on a pack of drones and press my left bumper to force pull them into the air. After peppering them with a few shots from my electric handgun, I release the button to send them slamming into the ground. Later, I’ll douse some enemies in gray goo and unleash an electric bolt to paralyze them.

That portion had me more excited about combat, as I began to see more of a sandbox potential to its action. With 13 weapons, a slew of craftable mods for each, a myriad of special powers, and upgrades to unlock, I get the sense that Atomic Heart will be a dream for those who love to tinker with their combat systems. There’s a lot of potential to build specific loadouts, finding the right synergy between powers and weapons. All I’m curious to see is how Atomic Heart gets from point A to point B, moving from that almost stealth-horror opening to its power-fantasy experimentation.

There’s a bit of a kitchen sink design philosophy at play here, as Mundfish has loaded this up with as many ideas as it can fit. There’s a crafting mechanic, open-world exploration between linear dungeons, a complex AI ecosystem that dictates how enemies act, and much more that went entirely over my head during my four hours. Staff at Focus Entertainment tell me the game originally had plans for a full co-op mode too, which was eventually cut due to its ballooning scale. I don’t think anyone who’s been following the game’s marketing will have any sense of its scope until they play it – and even then, I get the sense that it’s not going to stop taking creative swings until the credits roll.

That approach made much more sense when I spoke to Game Director Robert Bagratuni on-site at the demo event. During a chat, I asked him about some of the games that influenced the studio’s debut. He mentioned the Bioshock comparisons early trailers have earned and sort of sighed at the idea. He explained that he sees little value in simply making “clones” of other games; anyone who wants to play Bioshock can simply play Bioshock. Instead, Bagratuni wants to genuinely surprise players, constantly adding new layers to the action so it never feels like the game has shown you everything there is to see.

It’s an admirable approach, though one that I imagine will be the game’s ultimate test. There were moments when I wondered if the full game could wind up feeling a little unfocused. For now, I’m assuming that’s simply a byproduct of being flung into a mid-game section with most of my powers unlocked, rather than easing into it naturally. Even so, I’m left a little torn by its chameleon nature. Its more directed opening had me hooked from a story level, but less engaged in combat. That flipped later on, as I had more fun blasting androids in a sandbox at the expense of narrative momentum. I hope to see the two meet in the middle in the final product.

All of this will come down to execution. Mundfish has no shortage of ideas, but it’ll need to prove that it knows how to connect them all into a final project that feels cohesive. It’s a tall order for a first-time studio, but the effort and passion are certainly there. Even if it doesn’t wind up landing every punch, I imagine that its constant surprises will be enough to keep me engrossed in its promising sci-fi mystery. I’ll take some oddball creative swings from a fresh studio over a templatized genre piece any time.