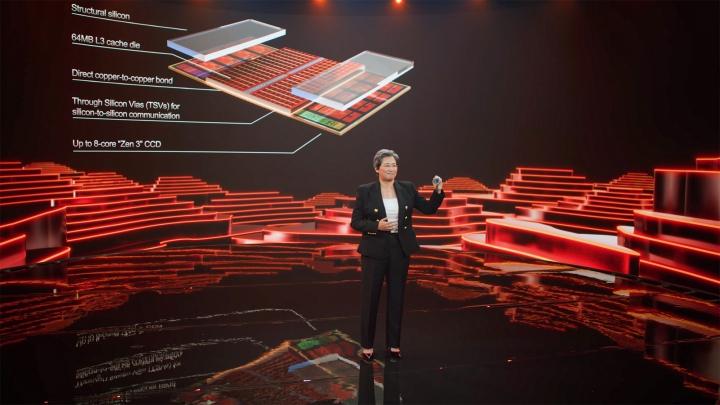 While we wait to see if these new 3D V-Cache chips are set to be the best processors, here’s everything you need to know about 3D V-Cache.

AMD 3D V-Cache is a packaging technology that stacks additional layers of cache on top of a CPU. It sounds complex, and from an engineering perspective, it is, but it’s not hard to understand what AMD’s tech is doing. Instead of laying the cache next to the processor, as has been traditionally done, AMD is stacking the cache on top to squeeze more on the chip.

It’s a different way to lay out a processor, and thanks to advancements in how CPU makers put components on a chip, AMD is able to squeeze on more cache without making a massive CPU. Originally, 3D V-Cache was restricted to an eight core CPU in the 5800X3D, however, with the Ryzen 7000 generation, AMD introduced the eight core 7800X3D, the 12-core 7900X3D, and the 16-core 7950X3D.

The idea is to give a gaming advantage, while still having the high-speed cores available for tasks that demand clock speed more than cache. It’s part of why AMD was able to deliver greater productivity performance in certain applications with these CPUs, at least according to its first party test numbers. It also claims to have worked extensively with Microsoft and game developers to ensure that the unique scheduling needs of such a CPU are met and catered for, so that games and applications can best take advantage of these intriguing CPUs.

How does 3D V-Cache work?

Your processor has three levels of cache, with the lowest being L3, or level 3, cache. Each cache level is smaller in size, but faster in speed, acting as a memory chain to your processor that can serve up instructions as they’re needed.

Think about cache like a supply chain. Your RAM is like a national warehouse, the L3 cache is a regional distribution center, and so on through the L2 and L1 caches. For 3D V-Cache, we’re talking about additional L3 cache, the slowest level on your CPU. That’s only relatively slow, though — each cache layer is still significantly faster than your hard drive or RAM.

More L3 cache allows the processor to stream and store more instructions, decreasing the number of times it needs to pull instructions from RAM. With the 5800X3D running at lower clock speeds because of limitations of the 3D V-Cache voltage and temperature thresholds, it was great in gaming, but some tasks suffered. With the Ryzen 7000 3D V-Cache CPUs that offer both high clock speeds on some cores and V-Cache on the others, AMD hopes to have solved that problem.

Why does AMD use 3D V-Cache?

There are a few reasons why AMD would rather make an entire chip line with additional cache rather than put more cache in the CPU itself, which has been the norm up to this point. For starters, 3D V-Cache is more customizable and can be added optionally to processors that would actually benefit from it. Although extra cache does have its use outside games, there are many programs that don’t benefit from having more cache, including benchmarks like Cinebench R23.

Cache is also problematic for manufacturing CPUs. One of the key aspects of making CPUs is the process or node, which determines performance, power efficiency, and transistor density characteristics. Newer nodes allow for physically smaller transistors and thus more compact processors, but cache is much more difficult to shrink than other components in a CPU, such as the cores. Since cache doesn’t benefit from being in cutting-edge nodes, it can be cheaper to just make a cache chip on an older and cheaper node.

Which CPUs have 3D V-Cache?

AMD has managed to have additional cores with this generation’s 3D V-Cache CPUs, though only half of them on each of the top two chips have it available. That makes the 7900X3D an interesting CPU, since it only has six cores with 3D V-Cache available, while both the 7800X3D and 7950X3D have eight apiece. We’ll need to see if that makes the bookend CPUs of this generation the best for gaming.

CPUs from this generation also operate at higher clock speeds across the board, although the top frequencies will be reserved for the cores without the 3D V-Cache. We don’t yet know what frequencies they’ll run at in everyday use, and may need to wait until we get our hands on the chips to find out.

We do know, however, that AMD has enabled some measure of overclocking with this generation, which wasn’t the case with the 5800X3D. AMD has enabled Precision Boost Overdrive (PBO) and AMD’s Curve Optimizer, which together should help enthusiasts raise clock speeds and lower voltages by a small margin — though AMD has said that it doesn’t expect big gains with these features.

Thermal design power (TDP) is flat across all CPUs, which may mean there’s additional overclocking headroom on non-3D V-Cache cores, and that these chips might end up being the most efficient of their generation.

In our Ryzen 7 5800X3D review, we found that it was, on average, the fastest gaming CPU available, beating out even the Core i9-12900K by a hair. Since then we’ve seen next-generation CPUs from AMD and Intel dethrone the 5800X3D, but it still remained competitive despite being a generation behind and several hundred dollars cheaper than the flagships.

We plan to test the Ryzen 7000 3D V-Cache CPUs when we get our hands on them in the coming weeks, but for now, here are our test numbers from the 5800X3D review:

An interesting outlier was Red Dead Redemption 2, where the 5800X3D was significantly slower than the 12900K and also the 5950X. This probably wasn’t a benchmarking error, but rather a legitimate loss caused by the 5800X3D’s much lower clock speed; the 5800X3D boosts up to just 4.5GHz while the 5950X can achieve 4.9GHz. Clock speed is still a significant factor in CPU gaming performance and can make a big difference in some games. It will be interesting to see if the new design of Ryzen 7000 3D V-Cache CPUs fixes this problem.

With early reports that suggest the new CPUs are up to 25% faster than Intel’s 13900K, we’re excited to see what these CPUs can do.

AMD made a big deal when it launched 3D V-Cache, and for good reason. The 5800X3D was able to go toe to toe with much more powerful processors, and the next-generation Ryzen 7000 variants look set to steal the gaming crown from Intel, even with its rumored 6Ghz 13900KS waiting in the wings.

It’s not yet clear if this is a technology that will benefit everyone that deserves to be part of the more mainstream CPU lines, but it’s clear that gaming sees a big boost. The 3D V-Cache technology also works as a great mid-generation refresh for AMD processors, helping it stay one step ahead of the competition — even if it doesn’t exactly encourage gamers to be early adopters of new AMD hardware.

On a technical level, 3D V-Cache is more than marketing hype, and has the potential to even improve some non-gaming tasks if AMD graphs are to be believed. We’ll need to test the new hardware ourselves to know for sure just how good it is, but if the 5800X3D is anything to go by, 3D V-Cache technology is still something to be very excited about.