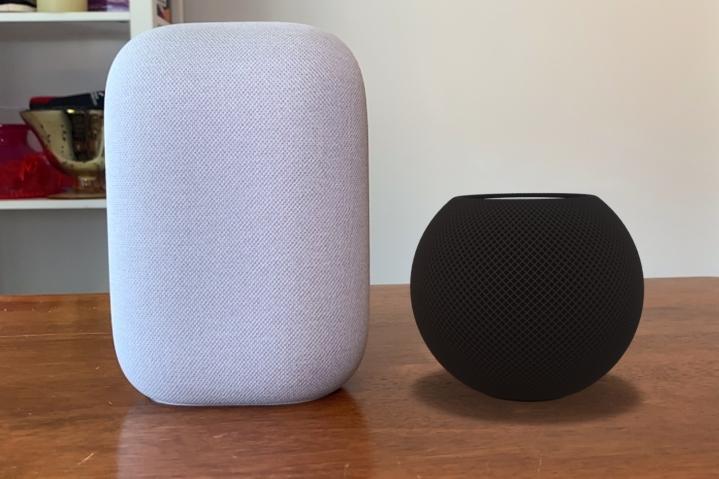 The Apple HomePod mini is arguably the best HomeKit hub on the market, offering impressive audio quality, an eye-catching design, and a surprisingly affordable price tag. If you’re not sold on HomeKit, however, Google Nest Audio gives it a run for its money. Google’s popular smart speaker clocks in at the same $100 price tag while offering access to Google Assistant — making it easy to communicate with the rest of your smart gadgets.

If you’re in the market for either of these products, here’s a closer look at everything offered by the HomePod mini and Google Nest Audio.

The next generation of the HomePod takes on an almost perfectly spherical shape versus the cylindrical shape of its predecessor. It looks somewhat similar to the Amazon Echo, but the elegant design comes as no shock — Apple has always excelled at making attractive products.

At just 3.3 inches tall, the HomePod Mini is absolutely tiny. It’s available in a wide array of colors, including space gray, yellow, orange, white, and blue.

Meanwhile, the Google Nest Audio has a more pill-like appearance. While not unattractive, it is substantially different than the HomePod mini, but still fits with most home decor without a problem. The Google Nest Audio is wrapped in fabric like its predecessors and comes in five color options: chalk, charcoal, sage, sand, and sky.

It’s worth pointing out that the Nest Audio is also twice the size of the HomePod mini, measuring 6.89 inches tall and 4.89 inches across. Needless to say, it has a more pronounced design due to its heftier size.

The original HomePod was the most audio-focused of any of the original smart speakers. The HomePod mini lacks the size to pack the same level of audio into its body, but it still has features that will make it sound better than most entry-level smart speakers. It uses a single full-range driver with two passive radiators to pump out clear audio.

Now, due to the larger size of the Google Nest Audio, it’s equipped to deliver some fantastic-sounding audio without much distortion. It has a 19mm tweeter and a 75mm mid-woofer, which Google says gives it a 76% performance increase over the original Google Home. Interestingly enough, the Nest Audio will adapt its audio performance based on what it’s playing to deliver the best optimal performance.

The HomePod mini will act as a HomeKit home hub just as the previous HomePod did, allowing HomeKit users to control their smart home features from afar remotely, outside of their home’s Wi-Fi network. The Intercom feature allows one person to broadcast a message across a specific HomePod mini or throughout the entire home and gives listeners the chance to respond. You can also ask Siri to do things like ping your iPhone, perform a web search, set up music alarms, and more.

The Nest Audio has a full suite of features, but they are the same features that are available on any Google Assistant-enabled device. The Nest Audio added little-to-no new features despite being a new iteration in the lineup. For audiophiles, you can set up groups to have music playing simultaneously on several Nest Audio speakers. Since it leverages the power of Google Assistant, you can use it to perform myriad functions, such as placing phone calls and controlling your smart home, and it can even act as a security device by listening to specific alarms and alerts at home with the aid of Nest Aware.

Price is one area where the two speakers are identical. Both are available for $99. For the HomePod mini, this is a more reasonable price point than its predecessor. The original HomePod’s main weakness was its high price point. For the Google Nest Audio, $99 is a fair price that places it around the midpoint for smart speakers. It isn’t priced as low as the Nest Mini, but it also isn’t as expensive as the Google Home Max.

The two smart speakers are comparable in a lot of ways, but ultimately appeal to different audiences. The HomePod mini is a great option for HomeKit users who do not want to invest in the original HomePod due to its price, but who want a smart assistant outside of their phones for the convenience.

The Nest Audio, on the other hand, is the next upgrade for users in the Google Home ecosystem, but it doesn’t offer many improvements on the feature front. Its strength lies in its sound quality.

If you want a feature-rich device that works with HomeKit and is small enough to fit most anywhere, the HomePod mini is a great pick — but if you’re a Google Assistant user and you want to stream Spotify through a speaker that slaps, try out the Nest Audio.