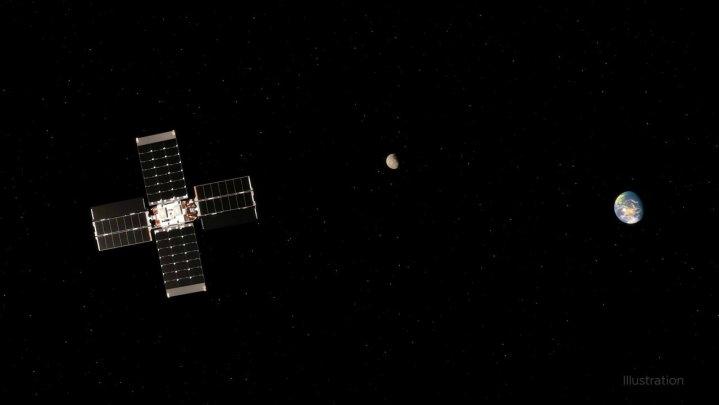 A briefcase-sized satellite on its way to the moon is experiencing difficulties with its thrusters. NASA’s Lunar Flashlight spacecraft is a small uncrewed satellite designed to search the moon’s south pole for surface ice using near-infrared lasers.

Launched in December last year using a SpaceX Falcon 9 rocket, the satellite was deployed along with a private Japanese moon mission which includes a rover built by the UAE. Lunar Flashlight is still on its way to the moon as part of its four-month planned journey, however, the thruster issue could impede its progress. The plan is for it to enter an orbit called a near-rectilinear halo orbit, an efficient lunar orbit that requires little fuel to maintain.

NASA announced that three of the spacecraft’s four thrusters are currently “underperforming,” leading to reduced thrust. Although the spacecraft is still in communication with Earth via the Deep Space Network and is otherwise healthy, the thruster issue could make it difficult for it to perform the required maneuvers to get into lunar orbit.

The issue was first noticed a few days after launch. While in its current phase of travel, called the cruise phase, the spacecraft only needs to fire its thrusters in occasional short pulses of a few seconds duration. But starting in early February, it will need to fire the thrusters regularly to make trajectory corrections.

Engineers have been performing tests on the ground to examine the problem which seems to be due to obstructions in the fuel line. The obstructions are stopping enough fuel from reaching the thrusters, making them fire with less force than they should.

To attempt to clear the obstructions, the team plans to fire the thrusters for a longer duration during trajectory corrections maneuvers. If this doesn’t work, the team is also working on a backup plan to make the maneuvers using the currently available thrust.