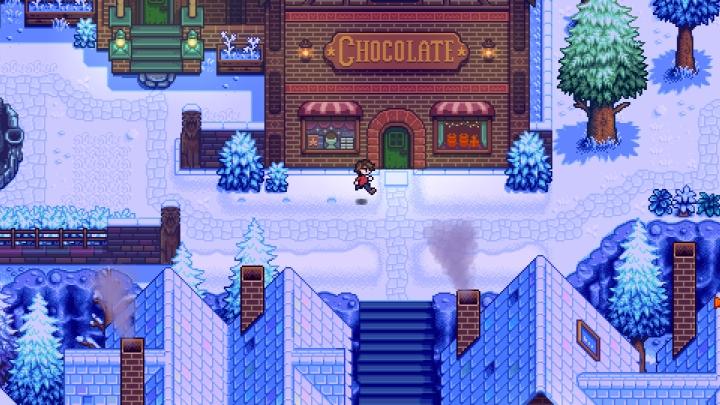 In latte 2021, indie developer Eric Barone (commonly known as ConcernedApe online), famed for single-handedly creating the magical Stardew Valley, officially announced that he was developing an all-new game. That game is called Haunted Chocolatier, and it looks like a whole other world of fun, casual simulation, and finding out the secret desires of every single member of your community.

Details are still limited: “I just like working in secret,” ConcernedApe reported in his last official progress update — but don’t worry, plenty of info has already dropped, and we’ll keep you updated about every detail so you know what’s going on.

There is no set release date for Haunted Chocolatier, and it looks like it’s going to be in development a bit longer than fans initially expected.

The most recent update on the game’s progress comes from an interview Barone did with Screen Rant in December 2022. The interview focused on a collaboration between Barone and the indie-pop band Alvvays to make a music video for their song “Many Mirrors,” but there were also a few Stardew Valley references and news about Haunted Chocolatier as well. Here’s what Barone had to say about his progress on Haunted Chocolatier:

“It’s going well, but it’s a big game. I have a big, ambitious vision for it. It’s a little bit daunting, the amount of work that it’s going to be. But Stardew Valley took me four and a half years; I’ve been working on Haunted Chocolatier for about a year and a half or maybe two years now. I announced it a little bit over a year ago, but it’s still gonna be a while. But I think it’s going good. So far. There’s a lot of good things so far.”

If Haunted Chocolatier takes as long to get to its final form as Stardew Valley did, fans might not see the game until 2025 at the earliest.

Haunted Chocolatier will absolutely be coming out on PC, but there has been no mention of other platforms.

Stardew Valley eventually made its way to consoles and mobile, so we’re assuming Haunted Chocolatier will be readily available to all gamers as well.

We’ve only seen a quick glimpse of Haunted Chocolatier in an early gameplay video released in October 2021. The video shows citizens going about their day in a cozy little town, a little bit of combat as a character gathers ingredients in the wild, and some chocolate-making footage from inside the chocolate factory.

Haunted Chocolatier begins with the player starting up a chocolate shop while living in a haunted castle in the middle of a snowy community. The player will need to seek a wide variety of ingredients and alliances to make the best chocolate possible and ultimately reach success.

One of the things people fell in love with in Stardew Valley was the ability to take their time, get to know everyone in the community, and make progress with a variety of relationships (and farming, of course), what Barone calls a “town game.” Haunted Chocolatier will be more of the same, with similar systems to give gifts, get to know characters, and progress relationships…or make mistakes.

Here’s where Haunted Chocolatier splits from Stardew Valley in important ways. There is a much greater emphasis on Action RPG features, and that includes combat, which has a complete overhaul. There will be a variety of weapons and shields, a full blocking system, a stun system connected with successfully blocking enemies, and more. This should make foraging attempts and exploration an interesting part of the game for those who want a little more action in their chocolate-making plans.

Surprisingly, the combat in the game could take a bit of inspiration from Diablo II.

“When I was in the early stages of Haunted Chocolatier, I was playing a bunch of Diablo II. Getting loot and seeing your numbers go up on the stats? I like that stuff,” said Barone in a December 2022 interview with Screen Rant. “I feel like a lot of Stardew Valley players aren’t that into it, but I’ve just got to do what I think is fun. And I think that’ll shine through in the game, if I’m excited about it.”

Fans of Stardew Valley are no doubt eager to know what sort of soothing tunes Haunted Chocolatier will have. Good news — it sounds great so far. You can check out the trailer to get an idea of what to expect. We probably won’t hear much more until the game nears completion.

According to the FAQ section of the developer’s blog, Haunted Chocolatier is being designed as a single-player game with no plans for any kind of multiplayer aspects.

The game is still likely a couple of years from release, so there’s no chance to pre-order it just yet. We’ll keep you posted.