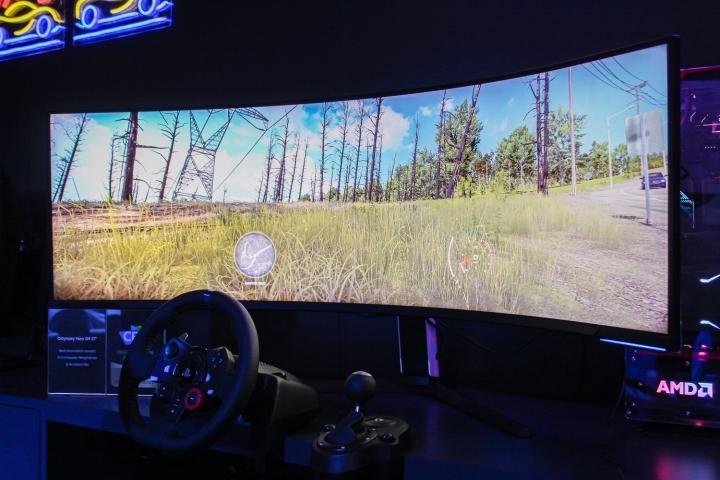 At long last, 8K is making its way to gaming monitors — or at least, that’s what Samsung’s new Odyssey Neo G9 2023 is pushing toward as it ushers in a new generation of gaming displays. But 8K isn’t new in itself — it’s been in the mainstream gaming conscience for nearly three years with GPUs and consoles — so why haven’t we seen more 8K gaming monitors?

As an era of next-gen displays starts to emerge, 8K feels like it should become the next big gaming destination. But don’t buy the hype. It’ll be a long time before 8K gaming truly catches on, and there are a few big reasons why.

What we have now

There’s currently one 8K monitor on the market — Dell’s UltraSharp UP3218K that sells for an obscene $4,000. It’s not new either, releasing close to six years ago at this point. That means it doesn’t have connectivity like HDMI 2.1 or DisplayPort 2.1, and it’s locked to a 60Hz refresh rate.

Monitors evolve year over year, so it’s strange we haven’t seen more development in 8K on the monitor front. The most practical reason has been the connection standards. Even at a 60Hz refresh rate, an 8K monitor requires a data rate of around 50 Gbps. HDMI 2.1, which supports around 45Gbps of data, only became widely supported in 2020, and DisplayPort 1.4 only supports around 26Gbps.

There’s compression to help monitors like the UltraSharp UP3218K, but simply put, there hasn’t been a cable and port that can transfer the massive amount of data an 8K resolution requires.

DisplayPort 2.1 changes that. It offers a data rate of 78Gbps, and with the connection’s support for 3:1 lossless compression, it can support 8K at 144Hz with High Dynamic Range (HDR) turned on. We didn’t have a port and cable that could transfer enough data for 8K gaming monitors when the UltraSharp UP3218K released, but we do now.

Frankly, even the best graphics cards available today can’t drive 8K. The only GPU that’s reasonable is the RTX 4090, and a big part of that is because that graphics card supports Nvidia’s Deep Learning Super Sampling (DLSS) 3 that can generate new frames with AI. It’s important to remember that 8K includes four times the pixels as 4K, and most GPUs still struggle with native 4K today.

To drive this point home, AMD released exclusive 8K gaming footage of the upcoming Lies of P shortly before this article was published. It looks impressive, but can you watch the footage in 8K? Almost no one can, and that’s the problem.

If you’re a frequent Digital Treads reader, you may have read that the EU could effectively ban 8K TVs next year. Why? Power demands. As the 8K Association, a group of  8K industry advocates, points out: “More backlight power is needed to create the same on-screen [brightness] as the equivalent-sized 4K TV.”

As resolution increases, the size of each pixel gets smaller. And the smaller the pixel, the more light from the backlight is necessary to create reasonable brightness. That Dell 8K monitor? It typically consumes around 90 watts of power. The 4K version comes close to 30W. That doesn’t sound bad — TVs can easily go above 100W and even higher — but that’s the power required when the screen is on at all, not the maximum possible power. And gaming only amplifies these power demands.

A premium 4K display like the Samsung Odyssey Neo G8 consumes considerably more power (three times as much or even more) as a typical 4K display due to a high refresh rate and local dimming. The cost for extra power is insignificant in most parts of the world, but more power means more heat.

There’s no ignoring the environmental impact, either. According to the Lawrence Berkeley National Laboratory, PC gaming consumes more electricity annually than an electric clothes dryer, water heater, and space heater, only being surpassed by lighting, air conditioning, and refrigeration. Most of that energy comes from the PC itself, but an in era of increasing GPU and CPU power demands, it’s hard to justify adding more power through a display and forcing your system to work even harder.

This isn’t an unsolvable issue. LCD backlights have gotten remarkably efficient, and that’s mainly because there is so much energy wasted through the various stages of a screen. By contrast, OLED doesn’t have that energy loss, but OLED technology isn’t nearly as efficient right now. Further optimizations in OLED could make it far more energy-efficient, and we’re already seeing that now. For example, eLeap is an emerging OLED technology that can vastly reduce energy consumption by increasing the light throughput with each OLED pixel.

Between power, heat, and environmental impact, there isn’t a single area that completely kills 8K gaming monitors. When they’re combined, however, they represent a big hurdle for high refresh rate 8K monitors, at least for the next few years.

We’re moving into a new era of gaming monitors, and the 2023 Samsung Odyssey Neo G9 is evidence of that. However, it will still take a few years for connection standards to widely support high refresh rate 8K displays, as well as to develop efficiency standards to lessen the power demands of such a high resolution.

One thing is certain: monitor brands will continue to push 8K as the next destination for gaming. We’ve seen it for a few years on the graphics card and console front, and monitors are starting to catch up. In this case, it probably won’t pay to be an early adopter — there’s still a lot of development we need to see in 8K and the hardware the enables it before it’s a viable option for gaming.