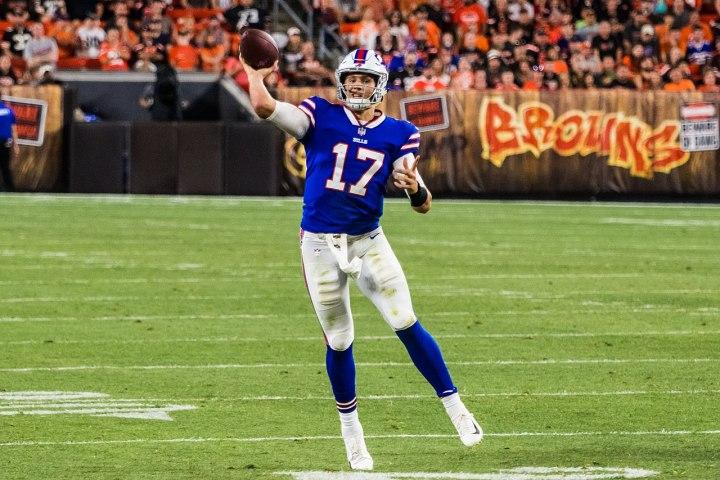 The second day of Wild Card Weekend features a stacked tripleheader. Kicking things off will be the No. 7 Miami Dolphins taking on the No. 2 Buffalo Bills. Later on, the No. 6 New York Giants will battle the No. 3 Minnesota Vikings. Finally, the No. 6 Baltimore Ravens will face off against the No. 3 Cincinnati Bengals in prime time.

The third game of Wild Card Weekend will pit the Miami Dolphins against the Buffalo Bills at 1 p.m. ET on Sunday, January 15. The game will be played at Highmark Stadium in Orchard Park, New York. According to FanDuel, the Bills are favored by 13.5 points.

The fourth game of Wild Card Weekend will see the New York Giants taking on the Minnesota Vikings at 4:30 p.m. ET on Sunday, January 15. The game will be played at U.S. Bank Stadium in Minneapolis. According to FanDuel, the Vikings are favored by 3 points.

The fifth game of Wild Card Weekend will feature the Baltimore Ravens taking on the Cincinnati Bengals at 8:15 p.m. ET on Sunday, January 15. The game will take place at Paycor Stadium in Cincinnati. According to FanDuel, the Bengals are favored by 8.5 points.

The first game between the Dolphins and Bills will air on CBS at 1 p.m. ET. The announcers will be Jim Nantz, Tony Romo, Tracy Wolfson, Jay Feely, and Armando Quintero. Watch the game on your television or through a device with internet access on CBS.com. Log in with your cable provider for access.

Watch Dolphins vs. Bills on CBS

The afternoon game between the Giants and Vikings will air on Fox at 4:30 p.m. ET. The announcers will be Kevin Burkhardt, Greg Olsen, Erin Andrews, and Tom Rinaldi. The game can be accessed on your television or through a device with internet access on Fox.com and Foxsports.com. Log in with your cable provider to access the live feed on the website.

Watch Giants vs. Vikings on Fox

The prime-time game between the Ravens and the Bengals will air on NBC at 8:15 p.m. ET. The announcers will be Mike Tirico, Cris Collinsworth, and Melissa Stark. Watch on your television, or view the game on a device with internet access via NBC.com. Log in with your cable provider for full access.

Watch Ravens vs. Bengals on NBC

Stream the game between the Dolphins and Bills through the CBS app and Paramount+. Access the CBS app in the app store on your smartphone or tablet or through a connected television device. For Paramount+, there are two plans: Essential and Premium. The Essential Plan (with limited ads) is $5 per month or $50 per year with limited ads. The Premium Plan (ad-free) is $10 per month or $100 per year.

The game between the Giants and Vikings can be streamed through two apps, Fox Now and Fox Sports. Both apps can be accessed in the app store on your smartphone or tablet and through a connected device, such as Apple TV or Fire TV. Log in with your cable provider for full access.

The game featuring the Ravens and Bengals can be streamed through the NBC Sports app from your connected TV, tablet, laptop, or smartphone. Log in with your cable provider for access. The game is also streaming via Peacock Premium or Peacock Premium Plus. Premium includes ads and costs $5 per month or $50 per year. Premium Plus is ad-free and costs $10 per month or $100 per year.

In addition to cable TV, Fox and NBC can be accessed on subscription live TV streaming services, such as Hulu + Live TV, YouTube TV, FuboTV, and Sling TV. Prices may vary depending on the service and package. Hulu + Live TV costs $70 per month and can be bundled with ESPN+ and Disney+. Sling TV offers Orange and Blue packages, which cost $40 per month each or $55 per month if combined. FuboTV, which ranges from $70 to $100 per month, and YouTube TV, which costs $65 per month, offer free trials so subscribers can try out the services before committing long-term. The Dolphins-Bills game on CBS can be found on all of the aforementioned live TV services besides Sling TV.

Tua Tagovailoa is out for the Dolphins' Wild Card against the Bills.

The Dolphins limp into the playoffs at 9-8 as the seventh seed. Starting quarterback Tua Tagovailoa is out, so Teddy Bridgewater or Skylar Thompson will start under center. The No. 2-seeded Bills enter the Wild Card Game as the 13-3 AFC East Champions. The Bills will look to win the game for safety Damar Hamlin, who was recently discharged from the hospital after suffering cardiac arrest during a game on January 2.

The Giants find themselves back in the playoffs for the first time since 2016. As the sixth seed with a 9-7-1 record, the Giants will be looking to win their first playoff game in over a decade. The Vikings exceeded preseason expectations by winning the NFC North with a record of 13-4, earning Minnesota the third seed. These two teams met last month in a game that saw the Vikings win on a last-second field goal.

The sixth-seeded Ravens are 10-7, but there are questions surrounding the status of quarterback Lamar Jackson. If Jackson can’t go, that will be a huge loss for a Ravens offense that hasn’t scored over 20 points since the end of November. The Cincinnati Bengals are out to prove that last year’s Super Bowl run was no fluke. The AFC North winners boast a record of 12-4, but won’t be satisfied until they win the Super Bowl.