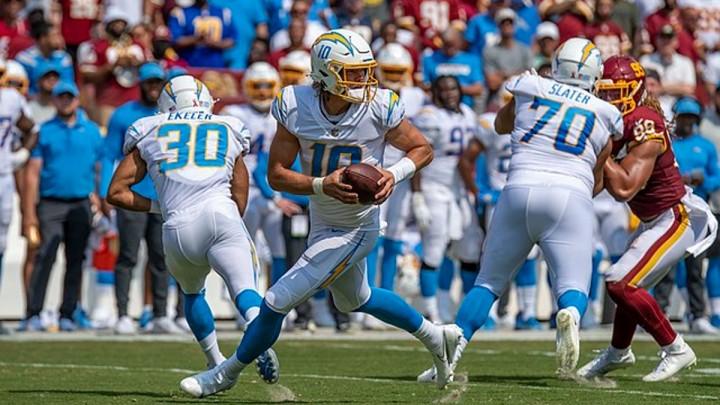 After a grueling 18-week regular season, the NFL heads into the first round of the playoffs, known as Wild Card Weekend. Six games — three in the NFC and three in the AFC — will be played over three days. The winners move on to the Divisional round, while the losers head home and start their draft prep.

The first day of Wild Card Weekend features an intriguing doubleheader. In the first game, the No. 7 Seattle Seahawks take on the No. 2 San Francisco 49ers. In the second game, the No. 5 Los Angeles Chargers face off against the No. 4 Jacksonville Jaguars.

The first game of the Wild Card round will have the Seattle Seahawks traveling south to take on the San Francisco 49ers at 4:30 p.m. ET on Saturday, January 14. The game will be played at Levi’s Stadium in Santa Clara, California. According to FanDuel, the Niners are favored by 9.5 points.

The second game of the Wild Card round pits the Los Angeles Chargers against the Jacksonville Jaguars at 8:15 p.m. ET on Saturday, January 14. The game will be held at TIAA Bank Field in Jacksonville, Florida. According to FanDuel, the Chargers are favored by 2.5 points.

The first game between the Seahawks and Niners will air on Fox at 4:30 p.m. ET. The announcers will be Joe Davis, Daryl Johnston, and Pam Oliver. The game can be accessed on your television or through a device with internet access on Fox.com and Foxsports.com. Log in with your cable provider to access the live feed on the website.

Watch Seahawks vs. 49ers on Fox

The second game between the Chargers and the Jaguars will air on NBC at 8:15 p.m. ET. The announcers will be Al Michaels, Tony Dungy, and Kaylee Hartung. Watch on your television, or view the game on a device with internet access via NBC.com. Log in with your cable provider for full access.

Watch Chargers vs. Jaguars on NBC

Seahawks vs. Niners can be streamed through two apps, Fox Now and Fox Sports. Both apps can be accessed in the app store on your smartphone or tablet and through a connected device, such as Apple TV or Fire TV. Log in with your cable provider for full access.

In addition to cable TV, Fox and NBC can be accessed on subscription live TV streaming services, such as Hulu + Live TV, YouTube TV, FuboTV, and Sling TV. Prices may vary depending on the service and package. Hulu + Live TV costs $70 per month and can be bundled with ESPN+ and Disney+. Sling TV offers Orange and Blue packages, which cost $40 per month each or $55 per month if combined. FuboTV, which ranges from $70 to $100 per month, and YouTube TV, which costs $65 per month, offer free trials so subscribers can try out the services before committing long-term.

The Seahawks enter the playoffs as the seventh seed with a record of 9-8. The Seahawks won their last game of the year in overtime against the Rams to eventually make the playoffs. For San Francisco, the Niners begin the playoffs as NFC West Champions with a 13-4 record. The Niners defeated the Seahawks twice this season and will look to make it three-for-three on Saturday.

The Chargers finished the year at 10-7, good enough for the fifth seed. Los Angeles won five of its last seven games to secure their playoff spot. The Jaguars battled back from a 4-8 record to win five straight games and secure a playoff spot out of the AFC South. These two teams played against one another in Week 3, with the Jaguars dismantling the Chargers by a score of 38-10.