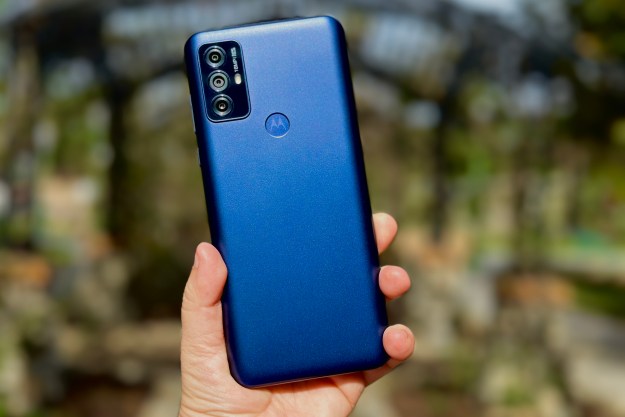 “The most impressive thing about the Moto G Play (2023) is its $170 price. But it becomes apparent very quickly how many corners Motorola cut to get there.”

Motorola is a brand name that has been around forever, despite some restructuring a while back. In the pre-iPhone days, Motorola was well-known for its Razr flip phone, and these days, Motorola has a slew of Android smartphones in its catalog, with several in the more affordable price range.

The latest budget Android offering from Motorola is the Moto G Play (2023). Though the low price of $170 is mighty tempting, your money would ultimately be better spent elsewhere. Here’s why.

The Moto G Play (2023) has a simple and clean design with curved edges, similar to what Apple did a few years ago with the iPhone 11. The phone chassis seems to be made with a lightweight plastic material, and the back is matte, so it’s pretty fingerprint-resistant.

It also has a water-repellent coating, so you won’t have to worry about using the device in the rain, accidental spills, or even when you’re working out. But don’t get water-repellent confused with waterproof, because it certainly isn’t waterproof (so don’t submerge it in water!)

On the back of the Moto G Play (2023), you’ll find a triple-lens camera system (16MP main camera with macro vision and depth sensors), as well as an indented circle with the Motorola “M” logo. This is where the fingerprint sensor is, and while it feels like it works reliably, I personally hate the placement of the sensor.

On the upper-left edge is the SIM card tray, and the opposite edge has the volume buttons and the sleep/wake button. There are textured ridges on the sleep/wake button that make it easy to differentiate it from the volume buttons, which I appreciate. Along the top of the device are a headphone jack and a microphone. The bottom is where you’ll find the other microphone, USB-C charging port, and speaker.

Overall, the Moto G Play (2023) has a pretty basic design that isn’t without flaws, but that’s to be expected from a phone at this price point. At the end of the day, it works and gets the job done.

The Moto G Play (2023) has a large 6.5-inch LCD display, but it is only HD+ and capped at a 1600 x 720-pixel resolution. Though that’s disappointing if you’ve tried out a higher-resolution display, it’s not surprising for a phone this cheap. However, a saving grace is the fact that you get a 90Hz refresh rate, which actually beats even the $800 iPhone 14, which only has a 60Hz refresh rate.

There’s a hole-punch cutout at the top of the display that houses the front-facing camera, so at least you don’t get a weird little dip or notch like on other devices. Along the bottom is a bit of a bezel, which makes it easier to perform swipe gestures from the bottom. But it also serves as a constant reminder that this is not an edge-to-edge display.

Things look decent enough on the HD+ screen, but I did notice that some graphics looked a little blurry and less than optimal. The 90Hz refresh rate means smooth scrolling on websites and apps, as well as easy switching between multiple apps, but I did notice a lot of stuttering and laggy frame rates; I’ll talk more about that in the next section.

I wasn’t expecting an amazing display like with my primary device, the iPhone 14 Pro, but even the OnePlus Nord N300 5G has a better-looking display, despite both having similar specs.

The Moto G Play (2023) comes equipped with a MediaTek Helio G37 chip, 3GB RAM, and Android 12 out of the box. It’s important to note that the Helio G37 came out in late 2020, so the Moto G Play (2023) is using a chip that is already over two years old. This hampers performance considerably, as I found the device to be sluggish even with basic tasks and navigation. And as mentioned above, I noticed a lot of stuttering and frame rate drops. The Moto G Play also takes a second or two to bring up things like the keyboard when I need to input something.

You get Android 12 with the Moto G Play (2023), so it’s already a little outdated considering that Android 13 is the current Android OS available. The upside is that you get a mostly stock Android experience because there isn’t much preinstalled bloatware, except for the Moto and Motorola Notifications apps.

But here’s the kicker — the Moto G Play (2023) will only get one major software upgrade to Android 13, and that’s it. It will get bimonthly security updates for three years at least, so you can make sure you’re safe from whatever vulnerabilities may pop up over time. But even so, a promise of one Android upgrade just doesn’t cut it in 2023. The Galaxy A14 5G, by comparison, ships with Android 13, is promised two Android OS upgrades, and will get four years of security updates.

Also of note is that the Moto G Play (2023) does not have 5G connectivity, so you’ll be limited to just 4G/LTE speeds. There is also no NFC chip, so you can’t use things like Google Pay.

You really only have about 18GB of space to use as you see fit.

Yet another pain point is the storage situation. The Moto G Play (2023) only comes with 32GB of internal storage, but you can expand it up to 512GB with a microSD card. I’m not sure in what world 32GB of storage is deemed as “plenty of space,” as way Motorola suggests in its reviewer guide, but Android 12 takes up almost half of that already, so you really only have about 18GB of space to use as you see fit. Even if you go the route of expandable storage, you’ll still be using a phone where the internal storage is packed to the gills. That may not matter in the short term, but as the weeks and months go on, not having any breathing room is bound to cause additional slowdowns the more you use the G Play — something it can’t really afford.

The Moto G Play (2023) comes with what appears to be a triple-lens camera system on the rear, but in reality, it’s just a single 16MP main camera that is assisted by two 2MP sensors for both macro images and depth sensing. For the front-facing camera, you only get a 5MP shooter.

Since this is a phone that is geared toward those on a tight budget, don’t expect a super-amazing camera. But for what it’s worth, the Moto G Play (2023) takes decent photos, at least in good lighting (as with any camera). I did find that sometimes the colors looked a bit washed-out compared to my iPhone 14 Pro, and details definitely get lost as you zoom in.

I do think that the Moto G Play (2023) captures skin tone more accurately, however, and portrait shots are pretty good for the price. I also like the fact that you can adjust the amount of blur in a portrait photo before you capture it. The default camera mode works all right for the cost of entry, but if you want more control over the image, then the Moto G Play (2023) also has a “Pro” camera mode built-in — with additional tools like autofocus lock, white balance, ISO, and more.

The selfie camera, though, it’s very much a budget camera at only 5MP. It’s hard to take a flattering selfie when you look blurry and washed-out, similar to when you use the built-in webcams on a MacBook. It’s not good.

If you’re looking for a powerful camera system, you won’t really find it on the Moto G Play (2023). But if you must have this phone, the pictures it can take are … fine. Nothing mind-blowing compared to the competition, but in a pinch, it’ll do.

Battery life on the Moto G Play (2023) is impressive because it comes with a 5,000mAh battery inside. On a full charge, you can get around three days’ worth of use before having to plug it back in again. My typical day of use involves checking Microsoft Teams and Outlook for work, and a lot of various social media apps. With my usage, the phone’s large battery will definitely last at least two full days before I feel like I should plug it back in again. Motorola includes both a power adapter and a USB-C charging cable in the box.

But charging the Moto G Play (2023) is a pain. You see, while it supports fast charging, it is capped at 10-watt speeds. With a 5,000mAh capacity battery, it will take a while to charge up the device if it’s dead. During my testing, it took around two-and-a-half hours to bring it from a 0% dead battery to 100%. Of course, charging speed slows down once the battery gets closer to 100, but this is important to note. If you have a dead battery, don’t expect to be able to charge it fast before you have to go somewhere — this is one of those phones that you’d best charge overnight.

The Moto G Play (2023) only comes in one color, which is a sleek navy blue. It costs only $170 unlocked and is available to purchase directly from Motorola, as well as retailers like Amazon and Best Buy.

If you’re looking at the Moto G Play (2023) because of the price, there are some other budget phone options that are worth a look. For just $230, you can grab a OnePlus Nord N300, which also has a 5,000mAh battery, but can fast charge at 33W and also has 5G. You also have a more up-to-date chip, a sleeker design, and feature-rich software with longer update support.

As you can see, Motorola made the G Play (2023) dirt cheap, but cut corners to do so. When you take a look at the other options that are available in the low and midrange price bracket, the Moto G Play (2023) simply doesn’t make sense.

The Moto G Play (2023) makes too many sacrifices

Even though it’s super affordable at $170, I simply cannot recommend the Moto G Play (2023). It’s baffling for a phone to come out in 2023 with a chip that is already over two years old, and it really does affect the overall performance of the phone. During my testing, I found it frustrating with the constant lag, stuttering, and frame rate drops when doing simple tasks. Even though it has an HD+ LCD display with a 90Hz refresh rate, that doesn’t mean much when almost everything looks and feels choppy.

I also don’t understand how a phone can launch in 2023 with only 32GB of internal storage, with almost half of that taken up by the operating system, so you don’t even get the full 32GB. Even the other budget phone I recently reviewed, the OnePlus Nord N300, has 64GB of storage — double what the Moto G Play (2023) offers, and for just $50 more.

And though I love having a large 5,000mAh battery, I’m puzzled by the decision to have it only support up to 10W fast charging. Again, the OnePlus Nord N300 also has the same size battery, but it can support charging speeds of up to 33W. It even has 5G support, which is also lacking on the G Play.

Even as a cheap backup phone, I’d skip this one, especially when you can just pick up a flip phone for less. The money you could use for the Moto G Play (2023) is better put toward something else, like a OnePlus Nord N300, Nokia G20 or G50, and even the new Samsung Galaxy A14. Budget phones have gotten really good in recent years, but unfortunately, the Moto G Play (2023) isn’t one of them.