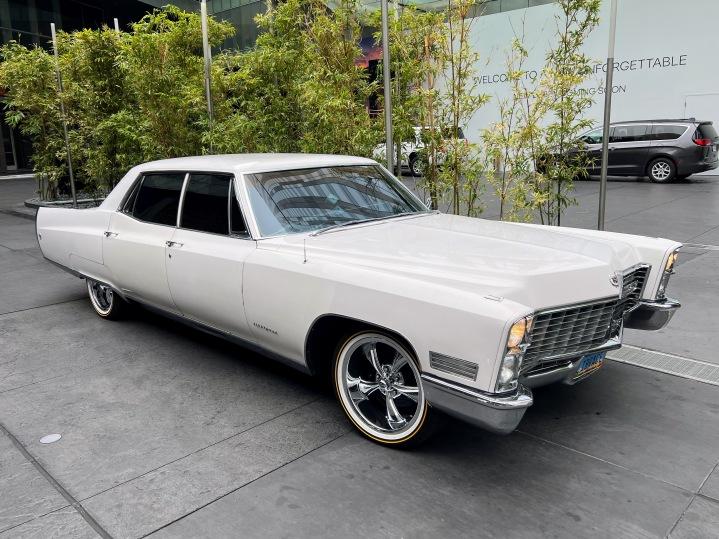 VR may still be struggling to find its “killer app,” but let no one claim that developers haven’t gotten pretty clever in trying. Holoride promises to turn the back seat of your car into an amusement park with VR synced to the motion of the car. After emerging in 2019 as an offshoot of Audi, the company arrived at CES 2023 with one major advancement: it now works in any car.

And to prove that point in the most dramatic way possible, they let me try it out in a 1967 Cadillac Fleetwood.

Since the Holoride system needs to sense the motion of a car to sync up the VR environment, it initially only worked with a few modern cars that could feed it the necessary data – all of them Audis. But now, the new $199 Holoride Retrofit simply sticks to your vehicle’s windshield and delivers its own GPS and accelerometer data to the VR headset view Bluetooth. Voila, VR in any car.

While the Retrofit puck, which slightly resembles an Amazon Echo Dot, admittedly looks a bit out of place in a 1967 Fleetwood, there is no compatibility issue: it only needs a windshield to grab onto with its suction cup. You could use it in a Model T, if you were so inclined. Even the lack of a USB port in the car isn’t a problem, since the Retrofit puck comes with an internal battery that can run it for 14 hours.

Though I don’t normally get sick in VR, I do get sick from reading my phone in stop-and-go traffic, and the idea of donning a VR headset in a car had me nervous. I considered popping a Dramamine before my demo, but in the interest of journalistic integrity, dear reader, I decided I’d experience this as any of you would.

You can use Holoride with any VR headset, but I used it with the HTC Vive Flow – the same headset Holoride bundles in its $700 starter pack. As our Fleetwood glugged away from the chaos of the Las Vegas Strip, I slid on the headset, which had been set up with Planet Ride, a simple demo game to ease me into the experience. With a cannon in front of me, I needed to shoot shapes in the sky that matched the color of my aiming reticle.

Look, this game isn’t going to win any awards. But it did let me get my bearings and ease my nerves about car sickness. Things started well. In Planet Ride, the VR environment around me slid by smoothly in sync with the car, and my brain did not protest. Even turns translated smoothly to the in-game environment. It helps that the 4,805-pound Fleetwood doesn’t do anything in a hurry, and the driver was doing his best to drive like a train conductor.

My stomach took a turn when it was time to switch games. The Holoride system battles carsickness mostly by ensuring that the in-game background environment rolls by in a way that mimics the motion of the real-life car. Though the Holoride menus do feature a background gliding by, it’s quite dim, and as I thumbed through different titles, my brain seemed to lose the illusion that what I was seeing was tethered to what I was feeling. It got worse when the intro screens for my next game completely blotted out the moving environment. By the time I hopped into Pixel Ripped 1995: On the Road, I was feeling … unwell.

Despite a fun premise – you’re in the back seat of a VR car, playing a game on a handheld gaming system – I was nauseous enough to have trouble focusing on Pixel Ripped. In fact, I had to rip off the headset and roll down the window for some air. This wasn’t really the experience I was looking for.

After a breather, things went slightly better in Cloudbreakers, a mech-fighting title with a nice clear view of the moving ground – but more controls than I could reasonably get a handle on as I struggled to calm my stomach.

Holoride’s phone-mirroring feature may actually have been my favorite – you can tether it to your phone and use any app just as you would on your phone, but presented as if on a gigantic TV, with a simulated moving background. I fired up YouTube and found it shockingly watchable. Most of us are already guilty of fiddling on our phones during long car rides, and this could actually be a much more comfortable way of indulging without the neck strain. Plus, any mobile game essentially becomes a Holoride title.

As my ride rolled back to its starting point, I felt a sense of relief to hop out and get some fresh air – but don’t take my experience as universal. I’m one person, and plenty of Holoriders have enjoyed it without issue.

Is this something I’d buy if it didn’t make me sick? Still no. The $700 starter pack is simply more than I can imagine shelling out for the limited in-car experience available – and that’s before you add a $20 per-month subscription for access to all the titles (the pack comes with one year free). But if you already own VR hardware, $200 for the Retrofit could be a reasonable way to get more mileage out of it without springing for a $70,800 Audi e-tron — one of the few cars that works natively with Holoride.

Just save a bit of budget for Dramamine.