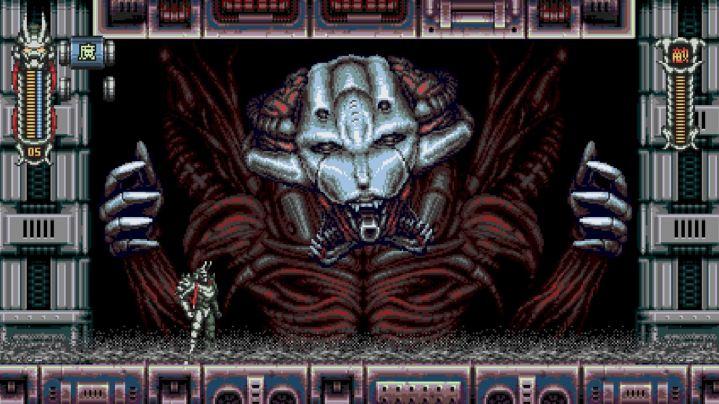 Are you looking for that first great game of the year to play before 2023’s AAA heavy hitters arrive? Check out Vengeful Guardian: Moonrider.

That title is a mouthful, but this is a straightforward 16-bit action-platformer inspired by classic series like Ninja Gaiden, Shinobi, and Mega Man. It hits all the proper retro gaming notes, like being easy to pick up but tough to master gameplay and having a delightful 16-bit visual style.

The teams behind 2019’s fantastic Contra-like Blazing Chrome — Brazilian developer JoyMasher and Dotemu’s indie publishing label The Arcade Crew — reunited for the project, cementing themselves as some of the best retro throwback studios out there. If you’re wondering if there are any great 2023 games to play ahead of highly anticipated games like Forspoken, then you won’t want to ignore Vengeful Guardian: Moonrider.

Vengeful Guardian: Moonrider nails its 16-bit setup right out of the gate. Its opening cutscene sets the stage for the dire, totalitarian world where the game takes place. Within moments of the start of the first level, the titular Moonrider defies his initial programming as a guardian of the totalitarian state and goes on a vengeful rampage to kill other super soldiers, bring down the current regime, and give people the freedom to make decisions for themselves.

Its story elements in surprisingly cinematic 16-bit cutscenes provide a compelling narrative backdrop for the adventure, much like the stories of the original Ninja Gaiden games did. That said, most of the Vengeful Guardian: Moonrider knows it can take a step back and let the game’s beautiful visuals and gameplay sing.

We’ve seen plenty of highly detailed 16-bit indie games at this point, but Vengeful Guardian: Moonrider’s pixels do a particularly great job at eliciting the beautiful chunkiness of Sega Genesis platformers with detailed graphics like Shinobi while still having a satisfying sci-fi edge.

Shinobi is also an evident influence in that the player character is quite large on the screen and that JoyMasher put a lot of effort into attack animation. Even when enemies are defeated, there’s an impressive amount of detail as you see them sliced in pieces and falling apart, not just flicking away and disappearing in an explosion of pixels. And those who want the game to look even more retro can turn on its CRT filter, which looks excellent but does lower the typically smoother 60 frames-per-second frame rate.

Because retro throwback games are so common, new ones need to go above and beyond with their presentation to stand out. Vengeful Guardian: Moonrider does so, just as Blazing Chrome successfully did. In terms of gameplay, it also feels like JoyMasher and The Arcade Crew pulled it right out of the 16-bit era, with a couple of refinements.

Vengeful Guardian: Moonrider‘s combat and platforming also call back to Shinobi. Despite the main character’s size, platforming is a significant element of the game, and players have many options in the air as they can wall jump, dive kick, and more. Meanwhile, its nonlinear level structure that lets players choose which boss they want to fight to get a special weapon is very reminiscent of Mega Man games.

Vengeful Guardian: Moonrider basks in the familiar when it comes to retro 2D platformer mechanics but still combines mechanics in a way that feels fresh. I even enjoyed the vehicle sections when they popped up, despite the fact that they usually drag down retro-like games such as Teenage Mutant Ninja Turtles: Shredder’s Revenge when they try to do it. Even one-time-level gimmicks have a pleasing amount of polish.

It’s a short experience, taking about three hours to beat while getting some of the hidden Power Module collectibles that can give the Moonrider extra abilities. Still, those hidden collectibles invite replays while the end-of-stage score, time to beat, and letter grade tallies encourage getting better at the game and potentially speedrunning it. All around, Vengeful Guardian: Moonrider provides everything you’d want from a 16-bit platformer released in 2023.

This year is poised to be an exciting year from games. From the release of One Piece Odyssey later this week through The Legend of Zelda: Tears of the Kingdom, Starfield, and Marvel’s Spider-Man 2, there’s a lot to look forward to. Still, when even the earliest indie release can hold its own as well as Vengeful Guardian: Moonrider does, you know we’re in for a good year.