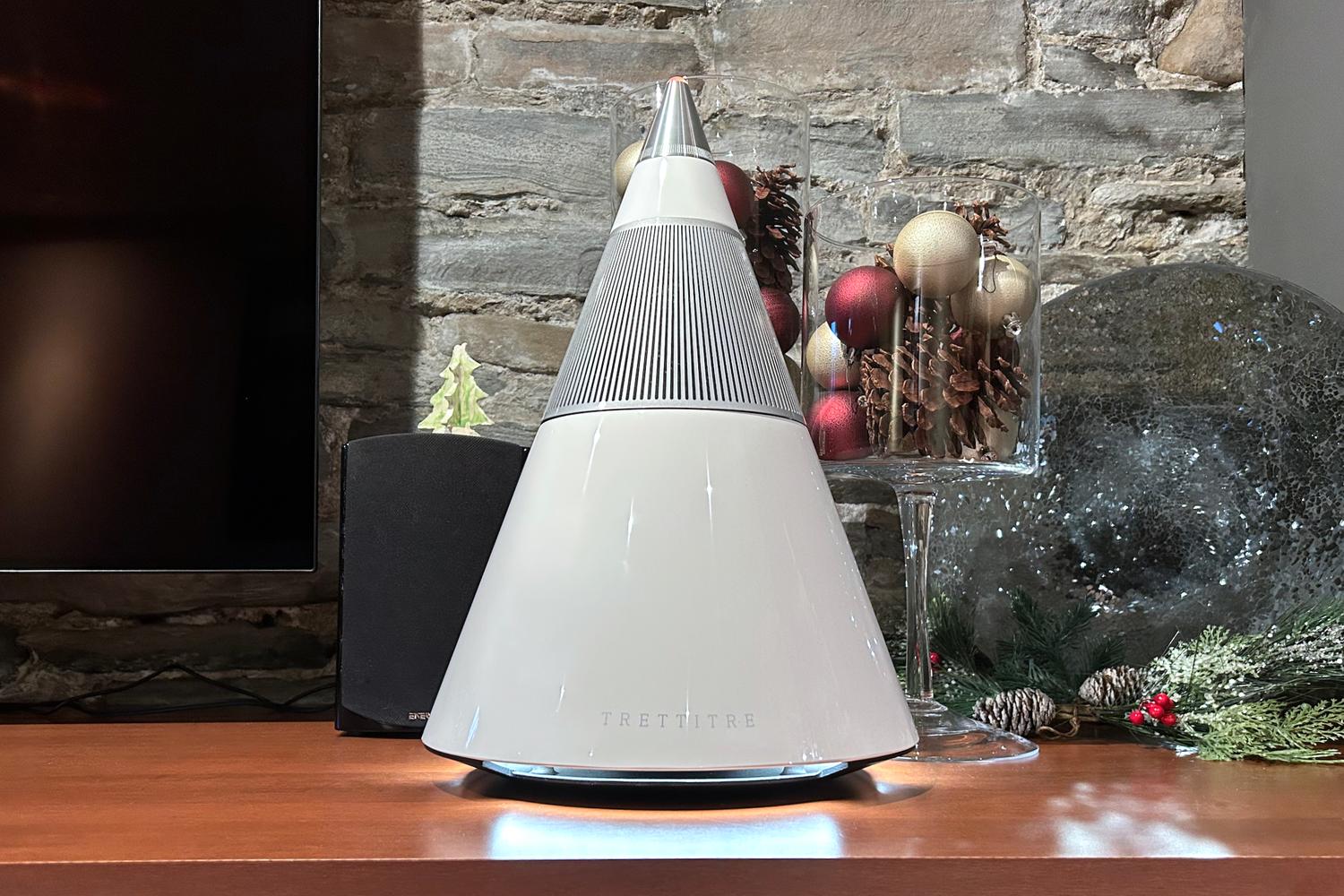 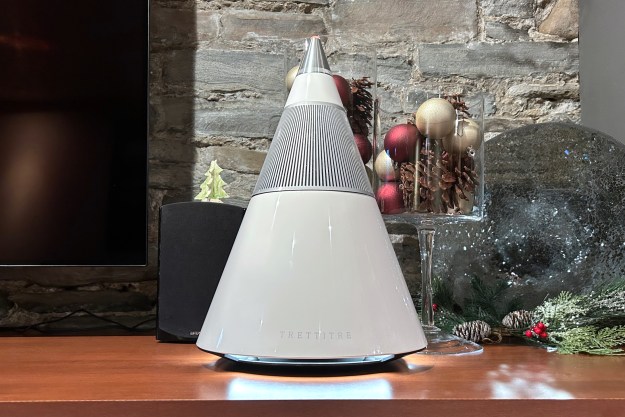 “If only its sound matched its looks, the TreSound 1 would be worth the investment.”

The TreSound 1 Bluetooth speaker looks like a mountain, according to its manufacturer, Trettitre, an up-and-coming audio manufacturer based in China. I guess it kind of does, though I would also accept “tipi,” “Christmas tree,” and “nuclear warhead” as descriptors — they all seem equally valid.

At that level of investment, the TreSound 1 finds itself competing with some serious talent, like the $699 Denon Home 350 wireless speaker, the $799 Sony SRS-RA5000, and the $799 Bowers & Wilkins Zeppelin.

I had high hopes that the TreSound 1 would take me to sonic peaks I had yet to experience. But in the end, the terrain proved too steep to climb.

You can’t fault Trettitre for trying. Triangular or pyramidal shapes are inherently beguiling, which is one of the reasons I was so keen to try the TreSound 1. At just under 17 inches tall and with an 11.8-inch diameter base, it’s a striking object, whether you get it in black, green, red, or white, like our review model.

It’s beautifully made, with a glossy finish that looks elegant and luxurious. The metal acoustic grille wraps around the upper portion of the cone, and almost seamlessly integrates into the body, along with the matching power/volume knob at the point.

When you turn it on, with a twist of said knob, a white light ring appears at the base, casting a gentle glow all the way around the speaker. A very soft amber light in the pinnacle lets you know when the speaker has paired successfully (pulsing for pairing mode, solid for paired). There’s also a 3.5mm analog line-in jack in the back if you don’t want to use Bluetooth.

Sadly, this speaker is all beauty and no brains.

And despite not being a very good match for our home decor, which uses a lot of fabrics, woods, and earth tones, it somehow managed to look good in a variety of locations. Unfortunately, it all goes, ahem, downhill from there.

All looks, no smarts

Normally, you might expect a $699 wireless speaker to have a few bells and whistles. Maybe a Wi-Fi connection so you can stream music directly from services like Apple Music or Spotify, or add the speaker to a multiroom setup. Perhaps an app that lets you adjust things like EQ, or vary the color of that LED light ring. Or, you might just want to be able to pair it with a second speaker for stereo sound.

Sadly, this speaker is all beauty and no brains. It has none of those things. There isn’t even a way to pause and play your music from the TreSound 1. On/off, volume up/down. That’s it.

OK, you say, don’t get too precious about all of the tech stuff, some speakers are just meant to sound good — to hell with all the extras. True, true.

In theory, the speaker should sound really good. It supports aptX HD for up to 24-bit/48kHz sound. Nestled in the base is a 5.25-inch 30-watt down-firing subwoofer. Behind the grille sits a pair of 2.25-inch full-range drivers and a pair of silk-domed tweeters. There even are 60 watts of class D amplification powering the rig.

Yet in a bizarre case of what you see is what you get, the TreSound 1’s sound signature is shaped just like the speaker itself. There’s a very impressive bass response — deep and resonant — but the highs that are emitted from the top of the cone are so achingly bright that they totally overwhelm the midrange.

And with no EQ controls of any kind, you’re stuck with it. Changing the volume does little to help. If your chosen streaming app has a built-in equalizer and/or EQ presets, it’s possible to do some tweaking. But finding a combination of adjustments that only tame that wild top end, without affecting the rest of the frequencies, can be tricky if not impossible.

The wonderfully powerful subwoofer has been woefully mismanaged.

The overly aggressive highs sometimes actually work. Listening to the whistling hook and energetic chorus of OneRepublic’s I Ain’t Worried is enjoyable, as is Bbno$’s Edamame. But tracks that are more complex can suffer, leaving you feeling like something’s definitely missing.

What’s even more unfortunate is that the wonderfully powerful subwoofer has been woefully mismanaged. Fire up an ultradeep bass cut like Billie Eilish’s Bad Guy, and distortion sets in from the very first notes, even at 60% volume.

At first, I thought the distortion might be happening because of the way the TreSound 1 manages volume. Unlike most Bluetooth speakers and headphones, which synchronize their amplification steps with your smartphone (a step up or down on your phone’s volume causes an increase or decrease of the speaker’s volume), the TreSound 1 uses its own analog amplification (controlled via the cone-shaped top volume dial) over and above whatever Bluetooth volume setting you choose on your phone. But even after experimenting with several combinations, I couldn’t prevent the distortion from creeping back in at louder volumes.

Trettitre touts the TreSound 1’s 360-degree sound pattern, and it’s true — if you place the speaker somewhere central, you get generally consistent audio (albeit with sweet spots in the “front” and “rear”). But I have the same qualms about the TreSound 1 as I do with any 360 speakers that need to be connected to power at all times: who among us has a central location in their bedroom, living room, or kitchen, with a conveniently located power outlet and a way to keep folks from tripping over the cord? There’s a reason why most 360 speakers have the ability to work on an internal battery, e.g. the Bose Portable Smart Speaker.

I really wanted to like the TreSound 1. Wireless speakers tend to look fairly similar, so the prospect of an eye-catching design matched with really great sound piqued my interest. But despite its undeniably unique shape and luxurious build quality, there’s just no way to rationalize the TreSound 1’s top-tier price of almost $700 with its disappointing sound and almost total lack of wireless speaker features. That’s way too much money to spend on a speaker that doesn’t sound fantastic.