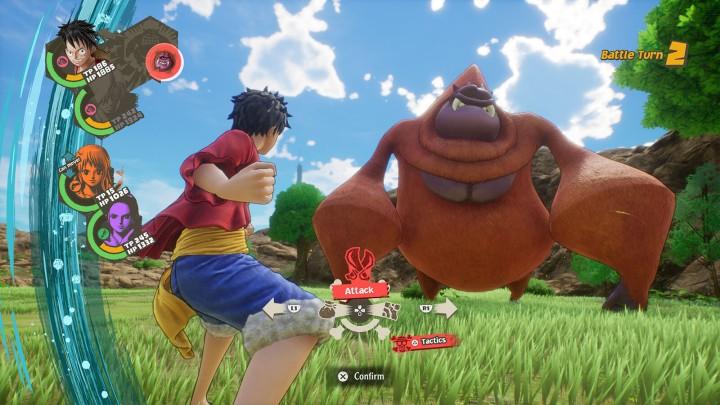 There’s no reason that I should enjoy One Piece Odyssey as much as I currently do. I’ve never seen an episode of the anime or read a page of the manga. The game itself isn’t a terribly good introduction to either one, tossing a whole cast of characters at me without telling me who they are. Within a few hours, I’m deep in a fan service plot filled with references to the series I don’t understand and in-jokes that go above my head.

And yet, I find myself drawn to the charming adventure. That’s not because I’m learning to love the world of One Piece (if anything, it confirms that the series just isn’t for me). Rather, I’m simply enjoying a user-friendly RPG that respects my time and energy. While our final review is still in progress, I’m personally already sold on what could be 2023’s first surprise.

If you’re not a fan of the source material, One Piece Odyssey is defined by its quality of life decisions. It’s a relatively straightforward turn-based RPG that isn’t bogged down by dozens of complicated systems. In fact, it goes out of its way to make sure players never feel lost. I first got that sense when exploring in the third person, as a sidebar on the right side of the screen clearly lays out what every single button does. I can press a button to close the menu, but I can pop it back out at any time.

Little touches like that are present throughout the game, making it easy to put down for a long period of time and return to. Combat, for instance, uses a “rock paper scissors” system akin to Fire Emblem. The chart of strengths and weaknesses is always displayed in the bottom left corner of the screen during battles, so I’m never left trying to recall what Power moves are weak against. When I choose a move and hover over an enemy, I also get arrows telling me if the attack will be effective or not. The visual information is all crystal clear, taking out any guesswork.

Combat itself is just as player-friendly, taking great care to remove a lot of frustration from battle. For instance, players can swap characters with another party member as a free action. Anytime I walk into an encounter and find I have a party with the wrong attack type equipped, I can simply switch to someone else and still attack on that turn. There’s no punishment for not being able to read a random number generator’s mind, which can be an annoyance in traditional RPGs.

My favorite touch, though, is a small one. When traversing the world between levels, I can click on the left stick to make my party leader automatically run. I simply point the direction I want them to move in with the right stick rather than holding down the right trigger to spring and controlling them with two sticks. It’s an incredibly simple feature, but one that highlights what makes One Piece Odyssey so pleasant to play compared to some of its more ambitious peers. It’s committed to reducing as much friction as possible for players, turning a genre that can often be overburdened with systems into something far more approachable. That lets players focus their attention on the colorful world of One Piece, from its over-the-top characters to its creative monster designs.

I imagine One Piece Odyssey could be a bit of a disappointment for hardcore gaming fans looking to sink their teeth into a complex RPG. It’s a brisk (for the genre) 30 hours, relatively easy thanks to its combat flexibility, and is limited in its customization. That’s exactly why I’m enjoying it, though. So far, I don’t feel overwhelmed as I juggle dozens of systems that I know I’ll forget if I step away for too long. Instead, I can simply focus on the simple joys of classic turn-based combat, where every battle feels like a puzzle to be solved via smart party juggling. Start-and-stop objectives and some early backtracking leave me feeling like I may not love the whole package top to bottom, but exploration and combat feel so breezy that I’m happy to go along for the ride as long as it stays fun.

It’ll be easy to sleep on One Piece Odyssey, writing it off as an IP project only meant for fans. However, if you’re the kind of person who loves the RPG genre on paper, but find complex behemoths like Xenoblade Chronicles 3 too exhausting to keep up with, its friendly design considerations make for a more casual experience that only trims out the excess fat. Embrace your inner Straw Hat and punch some monsters into oblivion.

One Piece Odyssey launches on January 13 for PS4, PS5, Xbox One, Xbox Series X/S, and PC.