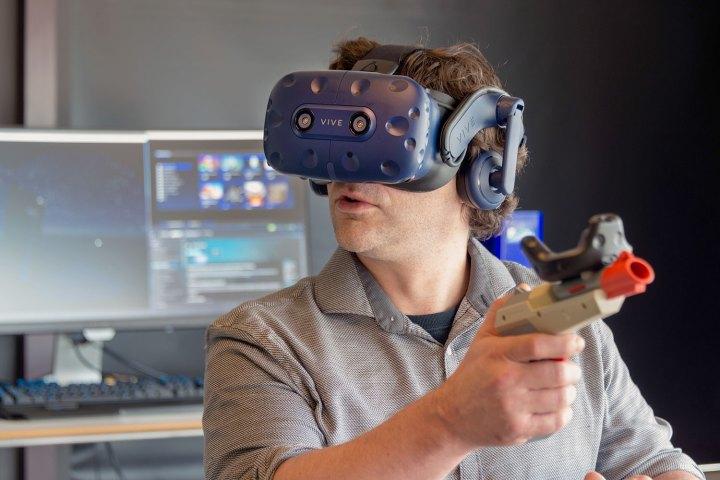 One of the biggest hurdles of using VR regularly is the setup time. Every time I wanted to use my VR headset, I would have to go through some infuriating setup steps, which included clearing playing space in my office, covering the glass cabinet to avoid Lighthouse tracker reflections, starting up SteamVR, and running any necessary updates for the game I wanted to play. Of course, when I was finished, I had to put it all away again. It became a chore, and resulted in me diving into the virtual worlds of SteamVR less than I wanted.

In an effort to change that, I went on a campaign of streamlining my VR setup to make it easier to get into and faster to get out of. The idea was to make virtual reality as easy to use as flopping down in my gaming chair for standard desktop gaming. After a few weeks of upgrades and adjustments, I’m happy to report that I’ve almost managed it.

There’s a reason a lot of the latest headsets from most of the major VR manufacturers are wireless. It makes a huge difference to the immersion of the virtual worlds, because you don’t have that regular reminder of brushing up against a cable, or coming up short against the end of its length. While not all PC VR headsets support wireless virtual reality, the Vive Pro does — and I just happen to own one.

The wireless adapter isn’t cheap, but I was lucky enough to have one lying around from my old HTC Vive headset. What I didn’t have was the Vive Pro adapter kit, which wasn’t that cheap either at around $75 for a short cable and a headband pad, but in my case it was well worth the expense.

Even with my originally limited playing space, going wireless made a big difference. It not only meant that I never felt the drag of a cable to remind me that I’m actually sitting or standing in an office and not on a synthwave-inspired rooftop, but it massively cut down on the setup and teardown, too. All those cables could be packed away, making for a cleaner, more accessible VR playspace.

It’s a lot easier to grab a headset and controllers from the wall and start playing than it is to unravel several meters worth of cabling.

A room-scale space with a dedicated PC

Having a room-scale area to play virtual reality games in is a real luxury and something I’ve longed for since my earliest days experimenting with the medium. (Room-scale is a design model for VR experiences that lets users freely walk around a play area, with their real-life motion reflected in the VR environment.) Untethering my headset from my PC presented a real opportunity to make this happen. While I looked into methods for extending the length of the wireless receiver to stretch my office PC to the living room, I ultimately settled on the nuclear option: building a dedicated VR PC.

I appreciate that this is something that most people can’t do, but, if like me, you recently upgraded your main gaming rig, you likely have a few components lying around. Virtual reality isn’t as demanding on modern gaming PCs as it once was — especially if you’re playing on an older, lower-resolution headset like me — so it may be more affordable to build a VR gaming PC than you might think.

Ultimately, I built a Ryzen 3700X-based, Mini-ITX gaming PC in my living room, permanently installed the wireless transmitter and Lighthouse sensors in viable positions, and used cord covers that matched the wall color to hide the wiring.

This wasn’t enough by itself, though. While the room-scale space was great to play in, and having a permanent setup meant less startup and teardown steps every time I played, it still took a while to get going. I had to turn the PC on, log in, start up SteamVR and the Vive wireless app, turn on the Lighthouse trackers… it was all still frustratingly slow.

So I made some more changes.

Remote power for the sensors

I was able to shave a good 30 seconds off of my VR gaming startup times by installing remote-controlled power outlets for the Lighthouse trackers. This way I don’t have to turn each of them on by hand, and I can just hit a couple of buttons on the remote — which I store with the headset — and they’re up and running. It’s just as fast to turn them off, too.

I haven’t switched the PC itself to startup remotely, but that might be one way to further improve this setup in the future.

Nearby storage and chargers

For the last step in improving the hardware side of my virtual reality setup, I found a storage solution for the headset and its accessories nearby. In my case, it was in the under seat storage in my sofa, which has enough space for the headset, battery, controllers, and a wireless keyboard for driver updates and the like.

In that space, I also installed a high wattage, multi-USB-A charger, and plugged in some short USB-C and micro-USB cables for charging the headset’s battery and the controllers. That way, whenever I come to play, they’re fully charged and ready to go.

The next big drag on the VR startup process was having to interact with the PC itself. Could I reduce that or even eliminate it entirely?

First, I removed the login password from my account — here’s how I did it in Windows 10, but you can remove your password on Windows 11, too. I then went one step further and removed the login screen entirely by making a few registry tweaks, and set both the Vive wireless and Steam VR apps to start up with Windows 10.

Now I have a dedicated VR PC that boots all the way to Windows and starts up all the apps I need without me having to do anything. That means leaving the TV off, and the keyboard in storage. I can switch the PC and headset on, wait 30 seconds, and the headset is up and running with SteamVR booted and ready to play.

Make sure everything is updated

To make sure that the VR PC’s software and games are all up to date for when I use them, I occasionally pop the PC on at random times when I’m not playing it so that it can complete any necessary updates. Since Steam starts up with the PC, I know it’ll get started on any updates it needs to, and when I next go to play something in VR, the games will be ready for me.

If you want to take more manual control of this process, you can. You can log in to your Steam account online, or use the mobile app, to manage your game library. If that PC is on and logged into Steam, you can have it download games, install updates, or even buy and download new games to be ready for your next play.

Incorporate it into workouts

With hardware and software taken care of, it was time to consider wetware: how could I make myself use VR more? A great way many people have found to integrate VR in their day-to-day lives is using it for exercise. That’s something I’d only dabbled with in the past, but with a new playspace and drive to use VR more than I have before, I put together a solid workout routine purely in VR.

It turns out, exercising can be a lot more fun when it’s a game. Playing Beat Saber, Synth Riders, or more demanding games like Hot Squat 2 or Super Hot, can be great tools for workouts or fun warmups. I’ve even spent a good hour boxing dead-eyed opponents in Thrill of the Fight, and found it to be just as intense as some real-life sparring.

By giving myself a few set times to use the VR setup each week, it made it more familiar, and gave me more opportunities to use it. As a result, I used it more outside of those workouts, too.

Can I make it any better?

I’ve quite enjoyed this journey of improving the accessibility of my aging VR setup. While the hardware is a few years out of date, I feel like I’ve crafted quite a premium VR experience by combining the ease of use of the standalone headsets with the high-end visuals only possible on a powerful gaming desktop.

I still have more ideas to try, too. Remote power on for the PC would save me the precious seconds it takes to walk to the chassis and press the power button. Valve Index controllers would be a nice upgrade for the Vive Pro’s old wand design, and as anyone who’s done heavy workouts in VR knows, cooling could always be better. I might even install a blind on the living room mirror, so I don’t have to keep putting a blanket over it.

Even if I don’t manage those last few tweaks, though, it’s clear from my experience with VR streamlining that accessibility is a huge stumbling block for virtual reality. It’s why Meta CEO Mark Zuckerberg is steering his company on a quest to make it that bit easier to use. Don’t think you have to have a Facebook account for an easy-to-use VR setup, though. PC VR can be nearly seamless too, if you tweak around the edges.