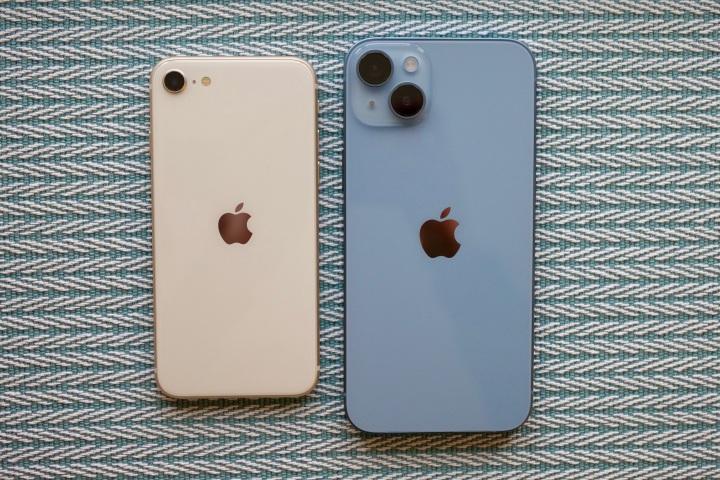 The phones and cameras

If this sounds like an unusual pairing to compare, you’re right, it is. However, the results are valuable as while we’re using the iPhone 14 Plus against the iPhone SE (2022), the Plus’s camera system is the same as the one fitted to the back of the regular iPhone 14 too, meaning the test also exposes just how different the camera experience is on the basic iPhone compared to the cheapest iPhone.

On the back of the iPhone SE (2022) is a single 12MP camera with an f/1.8 aperture. It also has Apple’s Smart HDR 4 and Deep Fusion technology, but it does not have an optical zoom or a dedicated Night mode. The Portrait mode is similar, but only works with faces and not objects, unlike the iPhone 14’s camera. The selfie camera has seven megapixels.

Due to the differences in cameras, we won’t be able to directly compare wide-angle or portrait mode shots, but we will still show you what’s possible when you choose an iPhone 14 or 14 Plus over the SE (2022) at the end of the test. During it, we’ll be looking at the main camera performance, zoom performance, front camera quality, and the night mode too.

You may think the iPhone 14 Plus has got this entire test in the bag, and I admit, before examining the dozens of photos taken with each camera, I was waiting for the more expensive iPhone to take all the wins. But it’s not the case, and the iPhone SE (2022)’s single camera has proven (again) that more-cameras-doesn’t-always-mean-better-photos. We’re going to start with some cake. Mmm, lovely.

It’s going to set the tone for the rest of the main camera test, and also shows Apple has not tweaked the iPhone 14 Plus’s camera performance since I reviewed it upon release. It still exposes photos less effectively than it should, leaving images a little washed out and lacking visual punch. The iPhone SE (2022) avoids this, and at first glance, takes better photos for it. The cake has a deeper brown color, the chocolate looks richer, and the plate is less starkly white in the SE (2022)’s image.

In the photo of the pond, we can see where the iPhone SE 2022 uses more smoothing technology than the iPhone 14 Plus, especially in the trees, grass, and foliage in the background — but it doesn’t stop the SE (2022)’s colors and overall tone being more shareable. This is really the takeaway in our main camera section. While the iPhone 14 Plus can take more accurate, natural, and detailed photos, it’s the iPhone SE (2022)’s photos my eye is more commonly drawn to, and that’s a very big positive point for the small, cheap phone.

However, the iPhone 14 Plus’s indoor performance in more difficult lighting was far better than the SE (2022)’s, as our last photo shows. The color of the Lego is more vibrant and natural, there’s less noise and grain in the darker areas, and the focus is sharper too. It backs up the technical ability of the iPhone 14 Plus, but it’s a shame the photos in more general circumstances are colder and less appealing than the SE (2022).

This is a bit of an unfair comparison, as the iPhone 14 Plus has a 2x optical zoom, while the iPhone SE (2022) only has a digital zoom. In the Camera app, though, neither provides a 2x shortcut and forces you to pinch-to-zoom. The iPhone SE (2022) doesn’t even have a numbered guide as to how close you’re getting. In other words, Apple really doesn’t want you to zoom in. But what happens when you do?

The rooftop photo shows the grain and noise introduced into the SE (2022)’s photos when you shoot in anything other than 1x. There’s considerably less definition, and it is immediately obvious you’ve zoomed in to capture the scene. The iPhone 14 Plus’s photo still has noise in the clouds, but the rooftops are much more clearly defined.

In the second photo, taken indoors on a gloomy day, the iPhone 14 Plus has better white balance and less noise. It’s definitely the better photo overall, but the iPhone SE (2022)’s photo isn’t that far behind, and many will consider it acceptable for a feature that may not be used that often. But look closely, and the iPhone 14 Plus’s zoom photos are superior, so those who may want to zoom in more often should consider it the better option.

It’s in our second photo that the big differences appear. Taken in darkness, but with street lights nearby, the iPhone SE (2022) failed to capture the image effectivity. The iPhone 14 Plus’s photo is totally different, with masses of detail, natural colors, and even stars in the sky being visible. It shows the effectiveness of the phone’s extended shutter in Night mode.

The final photo, taken of a floodlit church, shows that while additional light helps the iPhone SE (2022) take decent photos at night, it can’t match the iPhone 14 Plus. The larger iPhone’s photo has more natural textures, more detail in the darker areas, less noise, and less smoothing.

It’s hardly a surprise, given the technical differences between them, but it’s interesting to see just how much of a difference there is.

In anything other than very bright conditions, the iPhone SE (2022)’s selfie camera is bad. Unfortunately, weather conditions have been poor during my test, and that has meant all the selfies taken with the SE 2022 have been poor. But this shows the reality of living with the front camera on the phone. The iPhone 14 Plus isn’t a massive improvement and still struggles in low light, but it’s better than the SE (2022).

More versatile it may be, but there’s only one of these two additional features you’ll want to regularly use, and that’s the wide-angle camera. There’s solid consistency between it and the main camera, and often it increases the vibrancy when you do, resulting in highly shareable photos. The Portrait mode is hit-and-miss, where it often fails to capture the image you expect, or requires you to shift position to activate the Portrait mode so much, the photo becomes pointless.

The iPhone 14 Plus wins but doesn’t dominate

Yes, the iPhone 14 Plus wins our test. It really should, as it has a more versatile, technically more impressive camera on the back, so it would be a big upset if it failed to beat the simpler iPhone SE (2022). However, it didn’t win the main camera section. It’s a close thing, and I struggled with the decision. However, the iPhone SE 2022’s camera takes more emotionally engaging photos in general circumstances, and that makes a huge difference.

The final thing to think about here is cost. At $430, the iPhone SE 2022 doesn’t embarrass itself against the iPhone 14 Plus, which costs more than twice its price. It represents good value for someone wanting the cheapest iPhone experience you can get, but still have a fun camera.