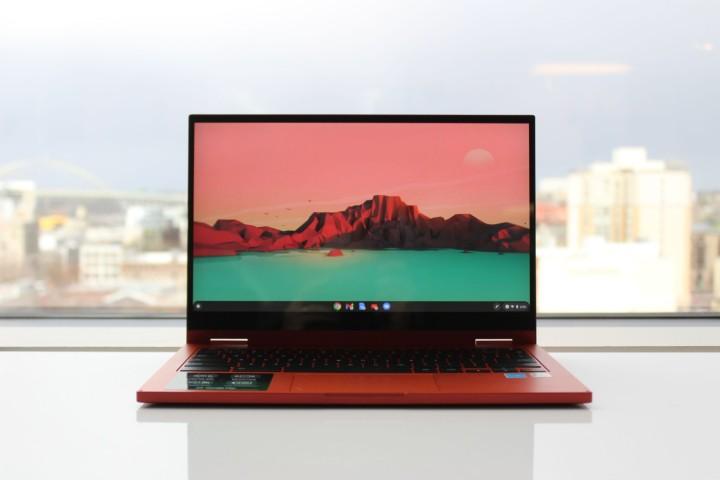 The popularity of touchscreens among electronic devices skyrocketed alongside the surge of smartphones and tablets, and over recent years, laptops have also started adopting touch displays. If you’re thinking about buying a touchscreen laptop, there are a lot of options out there — perhaps too many. If you’re having trouble deciding which product to purchase, you’ve come to the right place. We’ve gathered some of the best touchscreen laptop deals that you can shop right now, so you’ll also enjoy savings along the way. You need to hurry though, because there’s no telling how long these discounts will last.

The Samsung Galaxy Chromebook 2 features a 13.3-inch QLED touchscreen that displays colorful images and videos, a battery that can last up to 13 hours on a single charge, and a keyboard with wider keys and backlighting to improve your comfort and boost productivity. This touchscreen laptop is a Chromebook because it’s powered by Google’s Chrome OS, which is an operating system that depends on web-based apps instead of installed software to enable smooth performance despite low-end components. The Samsung Galaxy Chromebook 2, however, pushes the capabilities of what a Chromebook can do with its 10th-generation Intel Core i3 processor, integrated Intel UHD Graphics, and 8GB of RAM, with a 128GB eMMC for storage that you won’t often see in Chromebooks as they often rely on cloud storage.

The 13-inch PixelSense touchscreen of the Microsoft Surface Pro X offers 2880 x 1920 resolution, for sharp details and realistic colors whether you’re browsing the internet, watching streaming content, or playing video games. Performance won’t be a problem with the device’s Microsoft SQ1 processor and 8GB of RAM, with Windows 11 Home pre-installed in its 128GB SSD, though you’ll also have to purchase the detachable keyboard to use it as a laptop. Between the Microsoft Surface Pro X and Microsoft Surface Pro 8, which are often compared with each other, the advantages of the Microsoft Surface Pro X include its thinner and lighter design, longer battery life at up to 15 hours, and cheaper price, though both devices look sleek with slim bezels and come with the Windows Hello webcam and dual far-field mics for smooth video and audio during online calls.

If you want a larger touch display on your laptop, then go for the HP 15.6-Inch Touchscreen Laptop. True to its name, it comes with a 15.6-inch touchscreen with Full HD resolution, surrounded by 6.5mm micro-edge bezels for an ultra-wide viewing experience. The laptop is capable of keeping up with your daily workload through its 11th-generation Intel Core i7 processor and integrated Intel Iris Xe Graphics, plus 16GB of RAM that’s recommended by our laptop buying guide. The HP 15.6-Inch Touchscreen Laptop comes with Windows 11 Home in S Mode pre-installed in its 512GB SSD, which should provide ample storage space for your apps and files. If you’ll be joining online meetings frequently, the HP True Vision HD Camera and dual-array microphones with noise reduction software will make sure that you’ll always look and sound good.

The Dell XPS 13 2-in-1 laptop will surely boost your productivity, beginning with its 13.3-inch touchscreen with 3K resolution and Gorilla Glass Victus protection. From a tablet, it can switch to a laptop with the attachment of the separately sold XPS Folio, which functions as both a keyboard and a protective cover for the display. It will be able to keep up with your work or school activities with its 12th-generation Intel Core i5 processor, integrated Intel Iris Xe Graphics, and 8GB of RAM. The device’s 512GB SSD offers enough storage for all your important software and documents, including the pre-installed Windows 11 Home. Different variants of the Dell XPS 13 have stayed on top of our list of the best laptops, and the Dell XPS 13 2-in-1 laptop continues that winning tradition.

The Microsoft Surface Pro 9, the latest addition to Microsoft’s Surface Pro line of 2-in-1 devices, will let you maximize the capabilities of Windows 11 on its 13-inch PixelSense Flow touchscreen with 2880 x 1920 resolution. Inside the device are the 12th-generation Intel Core i7 processor and 16GB of RAM, which will allow multitasking between several apps without any slowdowns and crashes. It comes with Windows 11 out of the box, pre-installed in its 256GB SSD, but you’ll have to purchase the separately sold keyboard cover if you want to use it as a laptop. The Microsoft Surface Pro 9 is built for desktop productivity with Thunderbolt 4 ports, and support for the Surface Slim Pen 2. Microsoft promises up to 15.5 hours of usage for the 2-in-1 device before requiring a recharge.

How to choose a touchscreen laptop

Touch displays are hardly bleeding-edge technology in 2021, and both laptops and some all-in-one desktops are increasingly sporting these panels. There are even a few gaming laptops with touch displays (although they’re still pretty rare); the only place you won’t find touchscreens is on MacBooks. For whatever reason, Apple — usually no stranger to innovation — has declined to add touch displays to its iconic laptops. That, unfortunately, means that MacOS fans are out of luck in terms of touchscreen laptop deals, but if you’re happy with Windows or Chrome OS, you’ve got plenty to choose from.

Before you dive into any of these touchscreen laptop sales in search of a new machine, however, you should do some pre-shopping research and planning. First, set a budget. There are plenty of good touchscreen laptops out there today, so don’t assume you have to spend a huge premium to get this feature. There are even some very affordable 2-in-1 touchscreen laptop deals if you want a convertible. The cheapest, and some of the best 2-in-1 laptops, are still Chromebooks, but you can find some budget-friendly Windows models, too.

Your budget will be the obvious limiting factor for what features and specs you get, but before you worry about bells and whistles like fold-flat displays or higher screen resolutions, remember that the hardware under the hood is what counts the most. The CPU and RAM, in particular, are the components that actually perform the computing tasks you need a PC to do. In general, we recommend the latest 11th- and 12th-gen Intel Core processors, as well as AMD Ryzen CPUs, along with at least 8GB of RAM. Those are solid specs for basic work tasks and general everyday use.

If you’re on a really tight budget or really only need a laptop, then Chromebook deals are probably a better bet than Windows machines. Chrome OS software is largely cloud-based and less of a resource hog than other operating systems. Mobile CPUs (such as Celeron, Pentium, AMD A-series, and MediaTek) along with 4GB and pared-down flash storage are common on Chromebooks and are OK so long as you understand that these computers aren’t made for anything other than basic use. If that’s all you need, though, then there will be plenty of touchscreen laptop deals in this bracket.

If you can stretch your budget, then stronger hardware is always going to translate to better performance as well as additional future-proofing. Intel Core i5, i7, and even i9 processors, as well as AMD Ryzen 5, 7, and 9 CPUs, are what we recommend, and 16GB RAM is arguably the sweet spot when it comes to memory. You’ll also find larger 512GB to 1TB solid-state drives once you move past the $600 to $700 price range for touchscreen laptop deals, entering the upper echelon of the best touchscreen laptops.

Moving past the $1,000 mark gets you into the high-end touchscreen laptop sales, where you’ll find some of our own favorite models like the Dell XPS, HP Spectre, and Lenovo ThinkPad X series of ultrabooks and 2-in-1s. These typically boast better displays and improved build quality over their competitors, and you will pay a premium for that. Some, like the Dell XPS 15, may even sport discrete Nvidia GeForce GPUs, making them suitable for gaming and for graphically demanding jobs like video rendering. Core i7, Core i9, Ryzen 7, and Ryzen 9 CPUs paired with 16GB to 32GB of RAM are what you should look for at these prices.

If the sky’s the limit and you want one of the best laptops on the shelves, then it’s time to start looking for value-added features beyond simple hardware upgrades (as important as they are). Consider upgrading to a QHD or 4K touch display, for example, and you’ll see at least a few of those when shopping through touchscreen laptop sales from top brands like Dell and HP. The aforementioned Dell XPS and HP Spectre lines often feature these Ultra HD panels, to name just two. Some other extras to look for are included stylus pens or even completely detachable keyboards, as in the case of certain Microsoft Surface models.

Finally, a note on size: Touchscreen laptop deals range in size from 11-inch Chromebooks to beefy 17-inch desktop replacements, so pay attention to weight and dimensions when shopping. Chances are good that you already have a laptop size you feel comfortable with, but if you find standard 15.6-inch screens too bulky, now might be a fine time to move down to 14 or even 13 inches. Some makers like Microsoft and Acer have also been introducing smaller laptops with 3:2 screens (instead of the standard 16:9 aspect ratio), giving you more vertical screen real estate that is great for productivity.