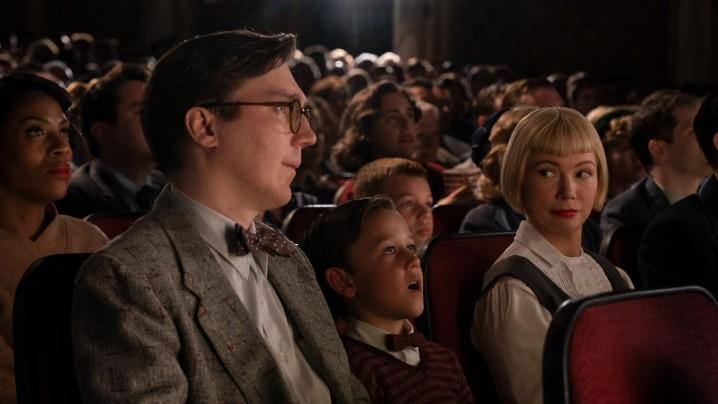 The Hollywood Foreign Press is at a strange time. Infamous for being the Oscars’ more chaotic and embarrassing younger sibling, the HFPA has faced a myriad of controversies throughout its 80-year-old history. From ethical dilemmas, bribery scandals, accusations of lack of Black representation in its voting body, and sexual harassment claims, the HFPA is no stranger to scandal.

But 2021 was a year of reckoning for the HFPA, and the Golden Globes suffered because of it. After much uncertainty regarding the 2023 Golden Globes, NBC announced it would indeed air them again. The Golden Globes will likely play a role in this year’s Oscar race and will lay a path for some of the season’s strongest contenders. But who will win? Who will go empty-handed? We break it all down for you with our predictions and slightly cranky commentary.

On the film side, things are hectic and confusing. Best Motion Picture Drama seems to be a clear win for Steven Spielberg’s origin story, The Fabelmans, while Spielberg himself seems a shoo-in for Best Director. However, one must never underestimate James Cameron, especially when Avatar: The Way of Water is on a fast track to reaching the $2 billion mark. I wouldn’t put it past the HFPA to crown Cameron the king of the world again, especially in a season that seems less reluctant to reward some of 2022’s most popular movies. And while the crowd-pleasing Top Gun: Maverick remains a possibility, its thunder seems to have been stolen by the Na’vi.

In Best Motion Picture Musical or Comedy, it’s a battle of banshees and multiversal beings. It might seem like the phenomenon that is Everything Everywhere All at Once has an easy path to victory, but it might have met its match in Martin McDonagh’s tragicomedy The Banshees of Inisherin. Everything Everywhere remains the favorite, but Banshees keeps picking up momentum, collecting critics’ awards left and right and cementing itself as a dark horse. For now, fortune seems to favor the Daniels’ unconventional sci-fi masterpiece, but it’s never wise to underestimate a good black comedy.

Things are much clearer on the acting side. Cate Blanchett will win Best Actress Drama for her tour-de-force performance in Todd Field’s challenging TÁR, while Michelle Yeoh has the Best Actress Musical or Comedy trophy in the bag for her emotional and career-best work in Everything Everywhere, making both Best Actress categories a sure thing. In the Best Supporting Actress category, Jamie Lee Curtis might win her third Globe for her unhinged performance in Everything Everywhere, but she faces tough competition from another overdue icon, Black Panther: Wakanda Forever‘s Angela Bassett. For now, my gut is to stick with Curtis. She is campaigning hard, and the HFPA loves to reward the effort.

The male side is trickier. Best Actor in a Motion Picture Musical or Comedy is locked, and Colin Farrell should have his speech ready if he plans to attend, anyway. As for Best Actor Drama, pundits are leaning toward Elvis‘ Austin Butler, and it’s easy to see why: it’s a flashy performance, and the Globes love an up-and-comer.

But it’s reckless to discount Brendan Fraser, especially because he has the best narrative out of any nominee this year. Considering his story with the organization, not rewarding him might be an awful look for the HFPA, and god knows they can’t deal with another scandal. So I’m sticking with Fraser all the way to the Oscars, not only because his work in The Whale is a masterclass, but because he is the embodiment of “it’s about damn time.” As for Best Supporting Actor in a Motion Picture, it’s Ke Huy Quan’s to lose, and no way he is losing. The Oscar might as well have his name already.

And what about the other categories? McDonagh will prevail in Best Original Screenplay, while Guillermo del Toro will walk away with Best Animated Feature for his reinvention of the little wooden boy. Best Original Score might be Babylon‘s only win, but watch out for The Fabelmans — few things can beat a John Williams’ score.

Interestingly, the hardest category to predict might be Best Non-English Language Film, where it’s a two-horse race between RRR and All Quiet on the Western Front. The odds favor the former, but it wouldn’t be a surprise if the latter came out victorious. Finally, we all know the HFPA will want Lady Gaga on stage to accept Best Original Song, but they could also want Rihanna, especially considering Gaga already has two Globes.

Over on the television side, Best Drama Series is up for grabs. Apple TV+’s Severance seems like a very HFPA choice, especially because they might save The Crown‘s big wins for its sixth and final season. There’s also the HBO phenomenon House of the Dragon, but the World of Ice and Fire has never connected with the HFPA or SAG, and there’s no reason to believe it might be different this time. Best Comedy Series might seem like a sure thing for Abbott Elementary, but I think The Bear will put in a surprise win. The Globes love to reward freshman comedies, and the Hulu original seems poised to continue that trend.

Odds also seem to favor The Bear‘s lead to win Best Actor Comedy, the underrated Jeremy Allen White, especially because no one in his category seems “hot” enough for the HFPA’s tastes. Best Actor Drama is equally uncertain: a win for Adam Scott makes sense, especially if Severance wins Best Drama. However, it’s Bob Odenkirk’s last shot at a Globe for his role in Better Call Saul, and after five nominations and no wins, it might be his time to take the stage.

Best Actress Drama is Zendaya’s to lose, and I don’t see anyone raining on her parade. As for Best Actress Comedy, I fully expect Wednesday‘s Jenna Ortega to walk away with the win. The HFPA loves to reward an ingenue, and with the show being an overwhelming and undeniable success, Ortega’s path to victory becomes clearer.

The supporting performances are chaotic, as per usual. Combining Comedy and Drama means you have categories with actors from Hacks and Ozark competing against each other. Best Supporting Actor will likely go to Severance‘s John Turturro, but Jonathan Pryce might surprise, even if his Prince Philip isn’t exactly the best.

In Best Supporting Actress, one of the Abbott Elementary ladies might prevail, probably Sheryl Lee Ralph. However, I wouldn’t put it past the HFPA to go with Elizabeth Debicki for her uncanny portrayal of Princess Diana in The Crown. In fact, I think Debicki is the likely winner, especially because her role in season 6 is shaping up to be short.

Then there’s the Best Limited or Anthology Series or Television Film categories. In an ideal world, HBO’s lunatic satire The White Lotus would prevail, but we don’t live in that world. Thus, Netflix’s ridiculously-named and irresponsible Dahmer – Monster: The Jeffrey Dahmer Story will come out triumphant — the ceremony is awarding Ryan Murphy with the Carol Burnett Award for honorary contributions to television; you know Dahmer will win big.

Moving on to the supporting categories, where something tells me Oscar winner F. Murray Abraham will prevail for his scene-stealing work in The White Lotus. Black Bird‘s Paul Walter Hauser is also a strong contender, but I don’t see him getting the HFPA’s favor. Finally, Supporting Actress seems to be all about Jennifer Coolidge, but she faces friendly fire from Aubrey Plaza and genuine competition from Dahmer‘s Niecy Nash. Ultimately, I think Coolidge is safe, but Nash could sneak up and pull a not-so-shocking upset.

The 80th Golden Globes will air on Tuesday, January 10, at 8 p.m. ET. Watch them live on NBC or stream them on Peacock.