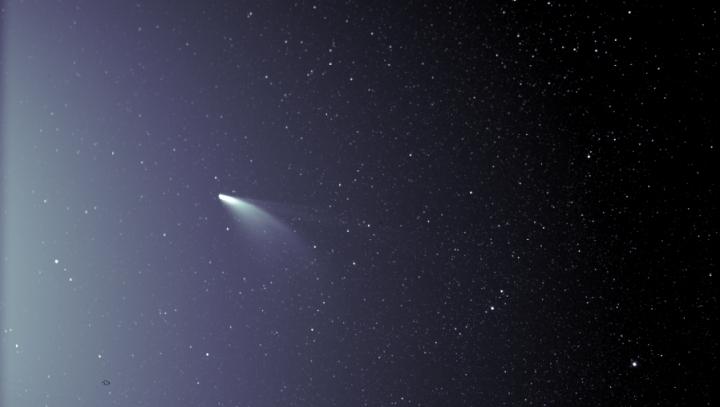 Skywatchers will soon be in for a special treat, as a comet which passes our planet just once every 50,000 years should be visible in the skies this month. Comet C/2022 E3 ZTF will be making its closest approach to Earth in the next few weeks, and may even be visible to the naked eye.

The comet was discovered in March 2022 at the Zwicky Transient Facility, hence the ZTF in its name, when it was almost 400 million miles from the sun. Unlike asteroids, which are made of rock, comets are made primarily of ice, and as they approach the sun and get hotter this ice melts and lets off gasses. This is the process that forms the distinctive tails of comets. Long-period comets like this one have highly eccentric orbits and are thought to originate from the Oort cloud, a very distant cloud of icy bodies which orbit around the sun far beyond the orbits of the plants and the Kuiper belt.

Comet C/2022 E3 ZTF will be bright enough that it should be visible to the naked eye; the first such comet since NEOWISE passed by the Earth in 2020. NEOWISE gave spectacular views as it came close to the planet, however, according to Sky at Night magazine, the comet visible this month won’t be as bright as that one and will likely look more “like a smudge in the sky.”

To get the best view of C/2022 E3 ZTF, skywatchers will need binoculars or a telescope, and the best time to look for it will be in late January and early February. The comet makes its closest approach to the sun on January 12, and its closest approach to Earth on February 1. The Planetary Society advises those in the Northern hemisphere to look in the northwestern skies for a faint, greenish smudge.

Alternatively, if you’d rather watch from home, the Virtual Telescope Project will be livestreaming the comet’s close approach on January 13.