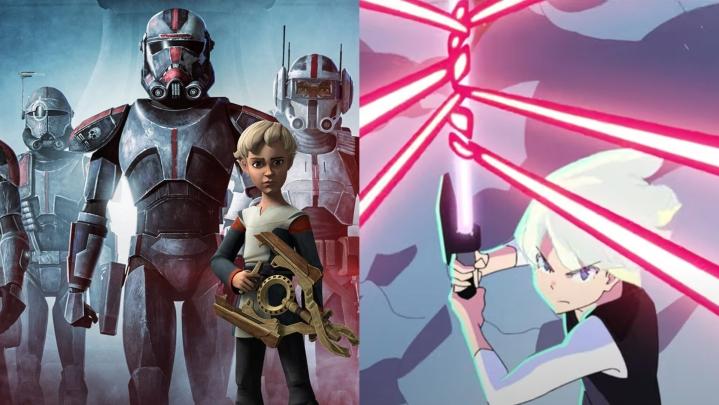 The Star Wars universe continues to expand its galaxy far, far away on Disney+ with supplemental content like the animated show The Bad Batch. Season 2 has just premiered on the streamer, continuing the intimately scaled and daring missions of the titular band of veterans formerly known as Clone Force 99.

The show has proven to be promising so far. Still, other animated works under the Star Wars corner of Disney have given fans a taste of how versatile it can be both conceptually and artistically. Visions was an anime spin on the mega-franchise, providing stylistically distinct approaches to it in a sort of “what if?” narrative format. This would be an exciting template for exploring the Legends continuity stories — formerly known as the Expanded Universe — that captivated so many longtime fans.

Capitalizing on the growth of animation

While the realm of animation hasn’t received the full respect it deserves, it’s undoubtedly made impressive strides in recent years. With acclaimed movies like Into the Spider-Verse and well-received video game adaptations like Cyberpunk: Edgerunners, the genre received a more significant share of mainstream attention and praise. Now is as good a time as ever to capitalize on the animation medium’s growth — and, thankfully, the aforementioned Visions and The Bad Batch demonstrate that Lucasfilm has taken good early steps.

Star Wars animated shows have arguably been an underappreciated strength of the IP well before the surge of Disney+ in the streaming wars, with Dave Filoni and co.’s The Clone Wars and Rebels series lovingly fleshing out the world. The Bad Batch is a testament to that success, as it functions as a spinoff/sequel to both. However, Visions is a clearer example of how bold Lucasfilm is willing to get — even if gradually — in terms of style and premise.

The various talented anime studios that helmed these shows deserve high praise for the visual spectacles and narratively imaginative takes on Star Wars they depicted, but Visions could also be seen as a proof-of-concept for adapting stories Lucasfilm has relegated to the sidelines.

Embracing the concept of “non-canon”

Entering the arena of fandom debate online can often feel like an exercise in frustration and futility, and the concept of “canonicity” — whether it’s Star Wars, the Marvel Cinematic Universe, the DC Universe, etc. — is often among the subjects that are the most exhausting.

In the end, in any medium, most pop culture media franchises have content that’s perpetually canon and non-canon, depending on the timeline in question. But a given project will always be canon to itself, and that’s part of what makes embracing some of the Star Wars stories sectioned off into Legends continuity an exciting prospect in the TV space.

And given the striking visual distinction between an animated and live-action production, TV animation would be a seamless avenue to explore wilder concepts like what Visions achieved.

That’s also not to say that Lucasfilm struck gold with every “Expanded Universe” idea — Luke Skywalker having an evil clone made from his severed right hand named Luuke Skywalker isn’t exactly ingenious — but there were certainly some worthwhile novels, comics, and more worth adapting onto the small screen.

Lucasfilm wouldn’t have to do much work on the marketing side of things either, as the company already has the Legends label as a designation for their stories outside of the mainline continuity. What’s more, even Marvel Studios is leaning harder into the concept on Disney+, with the likes of What If…? and the forthcoming TV-MA-rated Marvel Zombies animated show.

The Star Wars version of “What If…?”

There’s plenty of room both in and out of canon as well as in Star Wars’ distant past for new on-screen material, but the franchise could use several Legends tales as an answer to Marvel’s What If…? and Lucasfilm’s own ventures with Visions, but in a more serialized format. So far, while exciting and encouraging for the ambitions of both studios, these animated shows were bite-sized looks at alternate timelines.

With Visions, a series comprised of anime shorts clocking in under 20 minutes, Disney found critical and commercial success with an animated format that allowed creators to mix it up and push what they could do with the decades-old brand. Developing an animated Star Wars show as a serialized story would be the natural next step, and stories like Timothy Zahn’s beloved Heir to the Empire novel trilogy and Tom Veitch and Cam Kennedy’s Dark Empire comic book trilogy would be entertaining ways to safely play with established canon in an isolated, alternative sandbox.

A Star Wars animated show depicting a “what if?” story of Zahn’s iterations of Luke, Han, and Leia dealing with the rise of Grand Admiral Thrawn in the wake of Return of the Jedi would be a great concept for a non-canon story that splinters off of the Skywalker Saga.

Another story ripe for adaptation is Veitch and Kennedy’s comic book series Dark Empire, which The Rise of Skywalker arguably riffed off of with the “clone Palpatine” concept. Only this time, it would likely translate better into animation given the medium’s ability to portray outlandish ideas, and without the burden of being in canon.

Many longtime fans are understandably bemoaning Lucasfilm’s strict adherence to the Skywalker Saga and going to great lengths to ignore the fan-favorite Old Republic era — at least until Knights of the Old Republic Remake launches for PlayStation 5 — but there are many one-off stories under the company’s umbrella to diversify the studio’s content.

Legends stories like these are testaments to this and in between its big-budget live-action productions, these concepts could help make Star Wars loosen its conservative grip over storytelling approaches.

All episodes of these Star Wars shows can be streamed on Disney+, with The Bad Batch season 2 premiering new episodes every Wednesday.