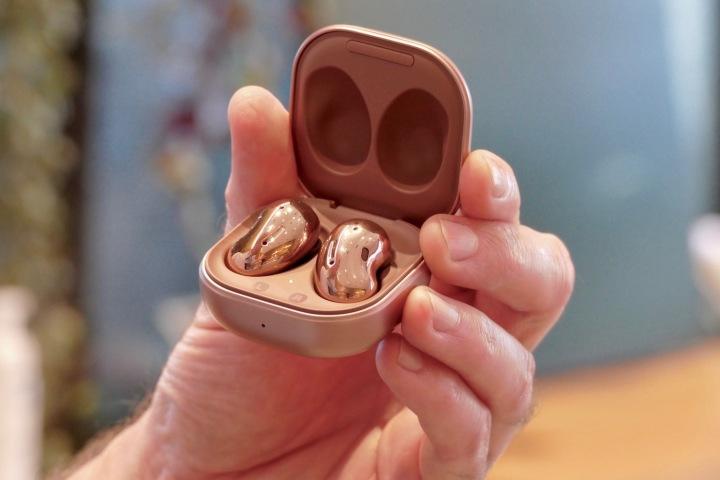 It’s a new year, which mean’s it’s the perfect time to upgrade your most beloved devices. Shoppers on the hunt for a new smartphone, tablet, wireless earbuds, or smartwatch should check out the available Samsung Galaxy deals, as the brand covers all of these electronic devices. So that you won’t be overwhelmed by all the options, we’ve rounded up the best offers from Samsung, but you should hurry if you want to avail any of these discounted prices because they may go back to normal at any time.

For golfers who are interested in smartwatch deals, the Samsung Galaxy Watch 5 Golf Edition is the perfect fit for you. This special edition of the Samsung Galaxy Watch 5 comes with a lifetime membership to the Smart Caddie app, which is worth $100. The app will track your shots and score, as well as provide an overview of the course, to help get your golf game to the next level. The smartwatch retains all the other features of the base model, including accurate wellness readings on metrics such as heart rate and body composition, auto workout tracking to monitor activities such as running and swimming, and advanced sleep coaching that will help you manage your sleep quality. The Samsung Galaxy Watch 5 Golf Edition also features an exclusive watch face and an attention-catching green home button.

The Samsung Galaxy S22 is always popular when it appears in Samsung’s phone deals because it’s the cheapest among the brand’s flagship smartphones. The smartphone features a 6.1-inch HDR10+ Super AMOLED display with Full HD+ resolution and 120Hz refresh rate, and a glass sheet at the back that’s protected by a layer of Gorilla Glass Victus. It’s powered by the Qualcomm Snapdragon 8 Gen 1 processor and 8GB of RAM, so you won’t experience any slowdowns when launching apps and switching between them. For photography enthusiasts, the Galaxy S22 is equipped with a 50MP wide camera, 12MP ultra wide camera, and 10MP telephoto camera with 3x optical zoom at the back, plus a 10MP selfie camera at the front. It also features optical image stabilization for smoother videos, and Super HDR that adjusts the colors frame-by-frame.

The Samsung Galaxy Tab S8 Ultra is not only a recommended choice if you’re searching for tablet deals, but also for laptop deals. That’s because the tablet can also function as a laptop through its separately sold keyboard cover, and it works with Samsung DeX if you want the full desktop computer experience. The device’s 14.6-inch Super AMOLED touchscreen with 2960 x 1848 resolution and a 120Hz refresh rate works great for both forms, while performance won’t be lacking through its Qualcomm Snapdragon 8 Gen 1 processor. The Galaxy Tab S8 Ultra comes with the S Pen, which is a stylus that will serve as an additional input option, and it supports microSD cards up to 1TB for additional storage space. If you like listening to music while working, your favorite playlists will sound amazing on the tablet’s quad speakers tuned by AKG and Dolby Atmos.

The Samsung Galaxy S22 Ultra is the best Android phone in Digital Trends’ best smartphones, so shoppers are always on the lookout for when its price will drop in Samsung Galaxy deals. It’s widely considered as the successor to the Galaxy Note line, with a 6.8-inch Dynamic AMOLED screen with 3088 x 1440 resolution, a refresh rate of up to 120Hz, and protection with Corning Gorilla Glass Victus+. Between the Galaxy S22, Galaxy S22+, and Galaxy S22 Ultra, the top-tier model of Samsung’s flagship smartphone line stands out with its higher resolution, two-day life with its 5,000mAh battery, a much better camera setup, and a built-in S Pen for extra usability.

The Samsung Galaxy Z Flip 4 draws a lot of attention whenever it appears in Samsung Galaxy deals. The folding smartphone features a 1.9-inch Super AMOLED screen with 512 x 260 resolution on its cover that will allow you to check notifications and access a variety of widgets, and a 6.7-inch Dynamic AMOLED 2X screen with 2640 x 1080 resolution, HDR10+ support, and a refresh rate of up to 120Hz. Unlike its early versions, the Galaxy Z Flip 4 is durable, with a hinge that’s caged in lightweight Armor Aluminum and an IPX8 water resistance rating. When comparing the Galaxy Z Flip 4 and Galaxy Z Flip 3, the latest version of the device should be your choice because of design improvements such as matte glass panels and slightly smaller hinges, faster performance with the better Qualcomm Snapdragon 8 Plus Gen 1 processor, and longer usage time with its bigger battery.

Sitting on the top spot of our list of the best folding phones is the Samsung Galaxy Z Fold 4, the latest version of Samsung’s flagship foldable smartphone that eliminates all the concerns from its previous releases. The device features a 6.2-inch Dynamic AMOLED screen with 2316 x 904 resolution on the outside, and a 7.6-inch Dynamic AMOLED screen with 2176 x 1812 resolution on the inside, with both displays offering refresh rates of up to 120Hz. The internal structure of the screen has been improved for durability, with the hinge tested to 200,000 folds, and for added protection, the smartphone has an IPX8 water resistance rating. The Galaxy Z Fold 4 is blazingly fast with its Qualcomm Snapdragon 8+ Gen 1 processor and 12GB of RAM, and it will have no problem lasting through the day with its 4,400 mAh battery.