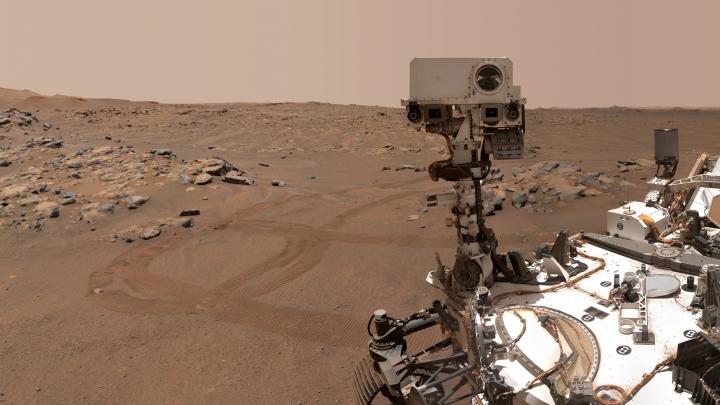 The Perseverance rover currently exploring Mars recently celebrated a milestone: its first Martian year since landing. Though the rover landed in the Jezero Crater in February 2021, making it almost two Earth years old, NASA measures its Mars missions in Martian years. As Mars orbits further from the sun than the Earth does, it has longer years, at 687 days, so the rover hit its first Martian birthday this week on January 6.

The end of Perseverance’s first Martian year also marks the end of its primary mission, as the rover was designed to operate for one Martian year minimum. But the rover is still healthy and going strong, so it immediately began its extended mission in which it will continue to explore the crater for evidence of ancient life and to collect samples of Martian rock and regolith.

The rover recently started creating a sample cache on Mars, where samples will be left for the future Mars Sample Return mission to collect and bring back to Earth. It will continue to work on this project as its new extended mission begins.

“We will still be working the sample depot deployment when our extended mission begins on January 7, so nothing changes from that perspective,” said Art Thompson, Perseverance’s project manager at NASA’s Jet Propulsion Laboratory, explained at the end of last year in a statement. “However, once the table is set at Three Forks, we’ll head to the top of the delta. The science team wants to take a good look around up there.”

The delta Thompson is referring to is the site of an ancient river delta, which is an exciting target for exploration because it could hold clues to whether microbial life ever existed on Mars. To get to the delta, the rover needs to travel up a steep embankment, and it should reach the top of the delta ready to start exploring sometime next month. It will then spend eight months exploring the area.

“The Delta Top Campaign is our opportunity to get a glimpse at the geological process beyond the walls of Jezero Crater,” said JPL’s Katie Stack Morgan, deputy project scientist for Perseverance. “Billions of years ago a raging river carried debris and boulders from miles beyond the walls of Jezero. We are going to explore these ancient river deposits and obtain samples from their long-traveled boulders and rocks.”