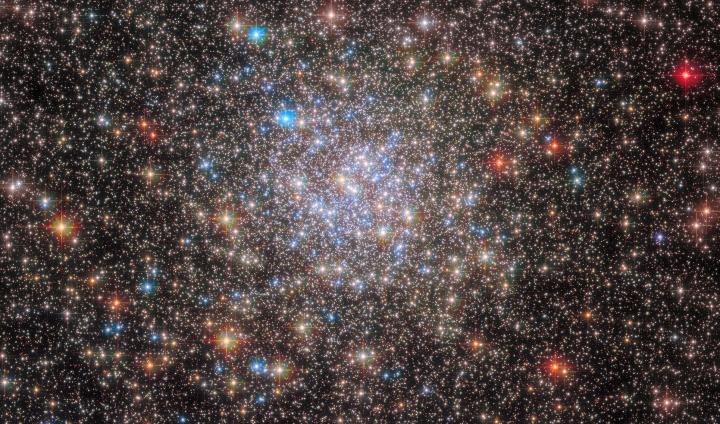 Within galaxies, stars aren’t evenly spaced out. Instead, stars tend to cluster into groups which can be as many as tens of thousands or even millions of stars strong. These groups of stars, called globular clusters, are tightly bound together by gravity and form a spherical shape with a dense core of stars in the center. They are also visually stunning, with thousands of points of light visible in different colors representing stars of all different ages.

The image of the week shared by scientists working with the Hubble Space Telescope this week shows one such globular cluster named NGC 6355. Located within our own galaxy, the Milky Way, this cluster is relatively nearby at less than 50,000 light-years distance from Earth in the constellation of Ophiuchus.

The image was captured using Hubble’s Advanced Camera for Surveys and Wide Field Camera 3 instruments, which can see the enormous structure in great detail. It is difficult to study globular clusters using ground-based telescopes as water vapor in the Earth’s atmosphere distorts the readings, making it harder to resolve individual stars within the cluster. As Hubble is in space, orbiting around the Earth above its atmosphere, it sits above this water vapor and so is able to take more detailed images.

“The dense, bright core of NGC 6355 shines in crystal-clear detail as Hubble is able to resolve individual stars in the crowded area toward the center of this image,” Hubble scientists write. “Hubble’s unique capabilities and vantage point above Earth’s light-distorting atmosphere allow it to capture a globular cluster’s constituent stars in detail.”