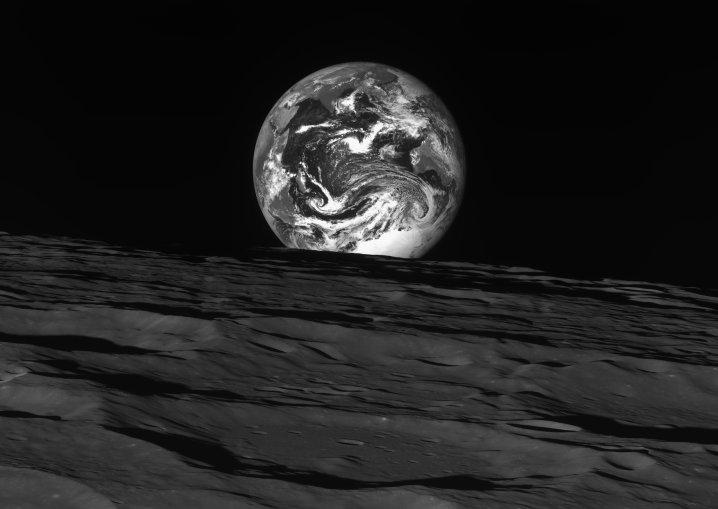 The moon is so hot this year, with current or future lunar missions planned from the U.S., Russia, UAE and Japan, and India. And there’s also South Korea, which launched its first lunar mission in August 2022. The Korea Pathfinder Lunar Orbiter (KPLO) arrived in lunar orbit in December 2022, and it recently sent back a couple of stunning images of Earth as seen from the moon.

The images were shared by the Korea Aerospace Research Institute (KARI) and show Earth rising over the moon’s horizon, taken using KPLO’s high-resolution camera. The spacecraft, also known as Danuri, aims to survey the moon for resources like water ice and metals.

The images were taken on December 24 and December 28, when the craft was at 344 km and 124 km from the moon’s surface respectively. Both show the lunar terrain in the foreground with the beautiful marble of the Earth rising over the horizon, taken using the Lunar Terrain Imager (LUTI) instrument which will be used to scout out suitable locations for future missions to land. The instrument can take images of the moon’s surface with a spatial resolution of around 5 meters, and it is scouting on behalf of a planned robotic lunar lander mission from South Korea aimed for the 2030s.

According to KARI, the Danuri craft is now “currently conducting work such as checking the performance of payloads and adjusting errors, and is scheduled to carry out full-scale science and technology missions from February.” It will be working with its six science instruments, including cameras, a magnetometer, a spectrometer, and a mapping tool provided by NASA to map out the locations of water ice in areas in permanent shadow.

Another feature of the spacecraft is that it will also test out a new communications technology in a fun way. The Delay-Tolerant Networking experiment aims to create a communication system for lunar landers which can handle drops in connectivity — and it tests this out by playing one of South Korea’s greatest cultural exports, the song Dynamite by K-pop icons BTS.