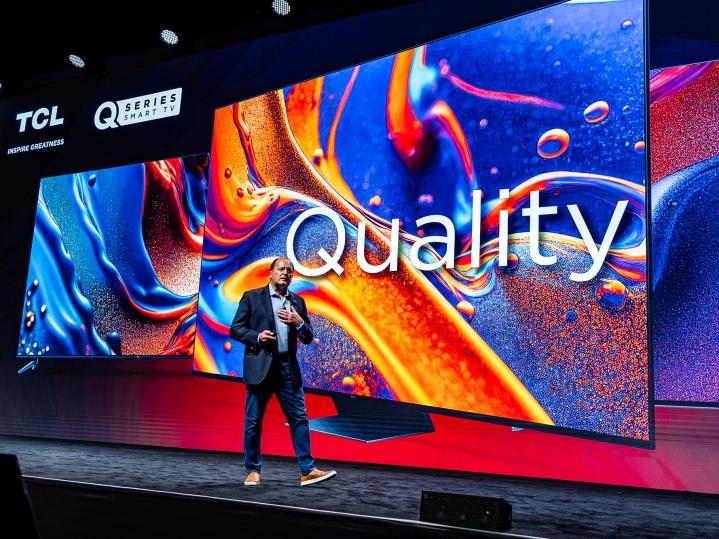 CES is not only a great event for checking out all the latest tech — it’s also a barometer. You can tell when a new development is picking up steam as each year more and more players jump on the bandwagon. Conversely, you sometimes can see when a given technology is falling out of favor, as fewer and fewer products and services mention it in their marketing.

At CES 2023, a sudden drop in the number of new 8K products has me wondering about the future of this format.

CES might have morphed into a car tech show in recent years, but make no mistake: it’s still the annual TV tech Super Bowl. If a TV brand is going to announce a new product, this is where it usually happens. So it was hard not to notice that TCL and Hisense had absolutely no 8K-capable TVs or projectors in their lineups. TCL made a pretty big splash when it introduced its first 8K 6-Series mini-LED TV in 2021, and it gave us every reason to think that an 8K model would be part of the company’s newly-named Q Series. Nope. Even though the new QM8 flagship will be available in a huge 98-inch screen size.

It was only 16 months ago that Hisense debuted its first 8K TV, the U800GR. But this year the company seemed far more interested in leveling up its 4K performance, announcing a dazzlingly bright new model, the 2,500-nit 85-inch UX.

We could be entering an 8K winter with no clear end in sight.

Even brands like Panasonic and Sharp, which haven’t had much of a presence in the U.S. but remain popular in other global markets, had no 8K announcements at the show. Vizio had no CES announcements, but it has already indicated it won’t be doing 8K for 2023.

That leaves Samsung, LG, and Sony. All three have made big bets on 8K in the past, but this year, LG seemed reluctant to talk about 8K at all. Its 8K Z Series OLED merited only a footnote in the company’s press releases, which simply advised that the new Z3 would benefit from LG’s OLED evo panel technology for the first time in 2023.

Sony bucked a decades-long tradition and declined to make any TV-related announcements (though it clearly will do so in the coming weeks or months). Only Samsung truly came out in support of 8K at CES 2023. It showed two new 8K Neo QLED TVs (the QN900C and QN800C) as well as its first 8K projector, the ultra-short throw (UST) Premiere 8K, featuring an impressively large 150-inch image.

It could be the cost of 8K TVs. They typically sell at a premium when compared to similarly sized and spec’d 4K models, with a gap of anywhere between $1,000 and $2,500, depending on the model.

Perhaps the recent E.U. ruling has caused a chilling effect.

And yet, buyers have proven willing to spend more money when they perceive a genuine benefit. A case in point is the rise and rise of OLED TV, a technology that once cost thousands of dollars for a 50-inch 1080p model.

Perhaps the recent E.U. ruling regarding power consumption, under which many 8K TVs would be effectively banned, has caused a chilling effect. Buyers may be reluctant to invest in a product that seems to be under regulatory attack, and manufacturers may not have a solution yet.

It might be the smallest screen that ends up saving the biggest screen from a total 8K apocalypse.

In the end, though, it’s more likely that 8K’s build-it-and-they-will-come approach has simply failed to pan out because of a nearly total lack of native 8K content. This is especially true in the U.S. where no cable, satellite, over-the-air, or subscription streaming service offers 8K programming.

This remains true despite the fact that Hollywood and other movie and TV industries have been slowly adopting 8K for content creation. Marvel’s Guardians of the Galaxy Vol 2 was the first feature-length movie shot in 8K — and it was made in 2016.

Mobile to the rescue?

Does all this add up to the death of 8K? No. But we could be entering an 8K winter with no clear end in sight. The vicious chicken-and-egg problem of people not wanting to buy an 8K TV until there’s a good amount of 8K content, and content distributors not wanting to broadcast/stream 8K until there’s a minimum viable audience of households with 8K TVs, doesn’t appear to be any closer to resolving itself than it did two years ago.

Ironically, it might be the smallest screen that ends up saving the biggest screen from a total 8K apocalypse. Samsung and Sony aren’t just sticking to their 8K guns in the vain hope that TV buyers will suddenly see the light. They’re both heavily invested in 8K from a content creation point of view. Samsung on the mobile side, with its fleet of 8K video recording-capable Galaxy S20 and newer smartphones, and Sony from the prosumer camera side, with a growing portfolio of models that can shoot in 8K.

It just wouldn’t make good sense for these companies to keep talking up the benefits of devices that can record in 8K if they didn’t make TVs capable of displaying that footage. Granted, it’s going to be a very small audience that wants to create and consume its own 8K footage, but that might be enough to keep 8K afloat until the content and distribution players catch up.

The other potential savior of 8K is our seemingly endless desire for a bigger screen in our homes. One trend that has never been reversed at CES is the growth of screen sizes and the drop in the cost to buy them. 85-inch TVs, once considered enormous, are now almost commonplace. You can pick up an 85-inch Samsung Q60B 4K QLED TV for under $2,000.

“When considering screen size alone,” said a recent report based on NPD’s Future of Tech forecast, “65-inch and larger TV unit sales are expected to grow from less than a quarter of the market in 2020 to more than one-third by 2024.”

And the bigger your TV, the more 8K makes sense. All of those extra inches require more pixels to maintain the same pixels per inch as smaller-sized 4K TVs. Once TVs larger than 85 inches become more mainstream, 8K will be hard to resist.

I think 8K will ultimately survive, but for now, it looks like it will have to take a seat on the bench, while it awaits its turn in the spotlight.