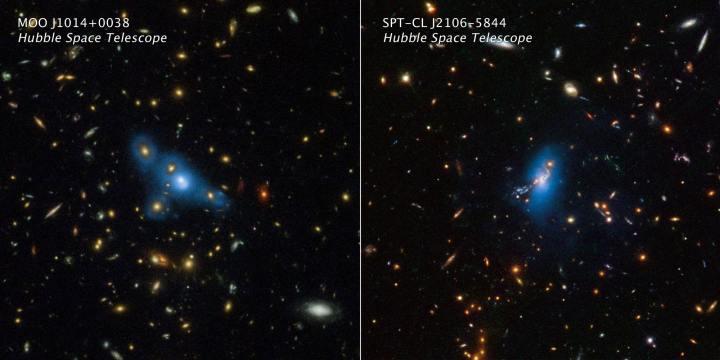 When most people learn about the structure of the universe at school, the model is simple: planets rotate around stars, and stars cluster together in galaxies, of which there are many in the universe. You might even have learned that galaxies can often group together by the thousand in enormous galaxy clusters.

However, there are both rogue planets and rogue stars out there, that wander the universe unattached to larger structures. Recently, the Hubble Space Telescope has been used to investigate wandering stars that aren’t tied to any particular galaxy — and found that these wanderers are giving off a ghostly haze of light that can be seen in galaxy clusters.

The difficult question that astronomers have been pondering is how rogue stars become scattered throughout a galaxy cluster, as they were unsure whether the clusters pulled in the rogue stars long after they formed, or whether the stars were already present as the cluster formed around them. To answer this, a group used Hubble to look at intracluster light, which is the diffuse and very dim light seen around and within galaxy clusters that isn’t related to specific galaxies within the cluster.

In a new paper in the journal Nature, the researchers looked at 10 galaxy clusters and found that the level of intracluster light compared to total light from the cluster stayed constant, even for those clusters which are extremely far away and thus billions of years old. “This means that these stars were already homeless in the early stages of the cluster’s formation,” explained researcher James Jee of Yonsei University in Seoul, South Korea.

The fact that even long ago, stars were wandering through these clusters means that there must have been some mechanism creating homeless stars in the early universe which we don’t yet know about. “We don’t exactly know what made them homeless,” Jee said. “Current theories cannot explain our results, but somehow they were produced in large quantities in the early universe.”

One theory to explain this finding is that because early galaxies are very different from the galaxies we see today, they could have been more prone to let go of stars which then became wanderers. “In their early formative years, galaxies might have been pretty small and they bled stars pretty easily because of a weaker gravitational grasp,” Jee said. Studying these lost stars could also be used to understand dark matter, by providing a way to map dark matter distribution by looking at how the rogue stars are spread.