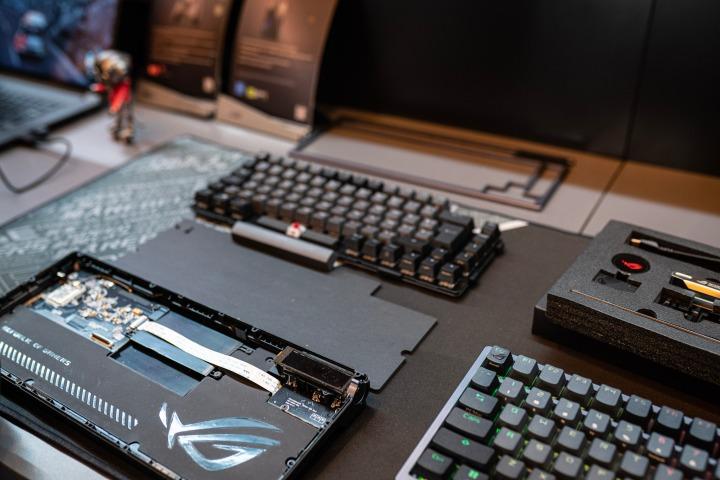 I won’t pretend that gaming keyboards are exciting. We see them year after year with minimal changes, nearly all of which you can see in a product photo. My relationship with gaming keyboards completely changed when I built my own — suddenly, nothing seemed even close. But Asus is challenging that position.

The ROG Azoth is an unassuming gaming keyboard, but it’s a huge deal for the world of custom-built keyboards. Even after seeing AMD’s Ryzen 9 7950X3D and Samsung’s Odyssey OLED G9, Asus’ lowly keyboard is my most anticipated product at CES 2023. Here’s why.

Let’s take stock of the current market. Assuming you don’t want to go down the rabbit hole of custom mechanical keyboards right away, there’s one main option as a base: the Glorius GMMK Pro. It’s a slab of aluminum that won’t move around on your desk, and critically, it includes a gasket mount. The gasket mount is important — it’s the key to the soft thunk you hear on high-end mechanical keyboards.

There are several other gasket-mount keyboard bases, but they all have something in common. They’re wired. The ROG Azoth supports wireless, and not just Bluetooth. It supports 2.4GHz and Bluetooth, as well as a standard wired connection. On top of that, Asus claims it can last over 2,000 hours without a charge with the LED lighting turned off. Woof.

I would have no issues replacing my custom GMMK Pro with the ROG Azoth.

That’s great, but I wasn’t excited about the prospect of a wireless gasket-mount keyboard until I actually used the Azoth. It sounds amazing, even with Asus’ NX mechanical switches. I’m a bit more snobby when it comes to the switches I use, but even out of the box, I would have no issues replacing my custom GMMK Pro with the ROG Azoth.

Asus isn’t moving backward, either. Just like the ROG Strix Flare II we saw last year, you can swap in any key switches and keycaps you like. Load up the ROG Azoth with some nice switches and keycaps, and it’s easily one of the best gaming keyboards you can get, even among high-end, enthusiast options.

Wireless is what really sold me on the ROG Azoth, but it has some other perks, as well. Namely, the built-in OLED screen. It’s small and a hell of a lot more classy than the AniMe matrix on the ROG Strix Flare II, but it’s still just as useful. You can use it to quickly access media controls, play an animation, or even turn on an audio visualizer.

I’m most excited about the system readout, though. You can display your CPU and GPU frequency, your CPU temperature, and any other metric you can normally monitor in Asus’ apps. In addition, the volume button on the side allows you to toggle through different readouts and even switch the keyboard between macOS and Windows modes (oh, did I mention it also supports Macs?)

Don’t discount the software support through Armoury Crate. You can change settings, but the Azoth comes with all of the software trimmings of a mainstream gaming keyboard. That includes on-the-fly macro recording and space for six onboard profiles. Good luck finding an enthusiast-grade keyboard that supports any of that.

As a cherry on top, the Azoth comes with a key switch lubing station. The included NX keys are pre-lubed, but any keyboard enthusiast knows that hand-lubed switches make all the difference. The Azoth ships with all the tools you need to break apart the key switches, and even a bottle of Krytox lubricant.

The pre-lubed switches are decent based on my time using the Azoth. I have no doubt that if you’re coming from a mainstream keyboard, the Azoth will feel like a dream to type on. I appreciate that Asus went the extra mile here, though. Hand-lubing switches is a hobby for staunch keyboard enthusiasts, and Asus is opening that door with the Azoth to a much larger swath of gamers who may not even know where to start.

Yes, a keyboard has me excited

Although we see crazy concepts and innovations at CES each year, few products actually push the envelope forward for long-established categories like gaming keyboards. The ROG Azoth pushes gaming keyboards forward in a way that no mainstream or enthusiast brand has done so far, and that’s why it’s my most anticipated product coming out of the show.