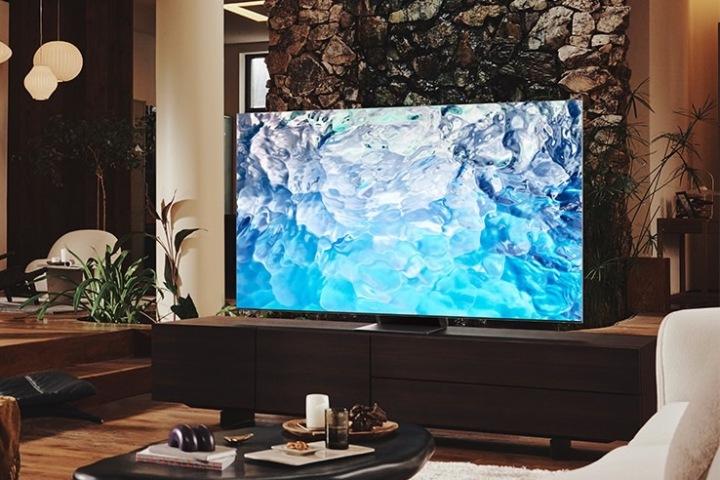 When it comes to resolution, 8K picture technology is (slowly, but surely) what’s coming next, with brands like Samsung, Sony, LG, TCL, and a host of others all offering 8K TV models that are engineered to take your breath away.

Delivering double the pixel count of 4K/UHD TVs, the best 8K TVs are also optimized to dish out incredible picture upscaling, as well as vibrant and colorful imagery, regardless of the source, and plenty of smart TV capabilities, too. And while TVs with 8K resolution collect a little less attention than today’s leading 4K TV models, that doesn’t mean they should be ignored. After all, hardware tends to drop before software, so we’re hoping there’ll be plenty of 8K content to enjoy over the next few years. Fingers crossed.

But if you’re interested in buying an 8K TV today, and you’re OK with paying a premium for it, what model should you go for? Right now, our best pick is the stunning Samsung QN900B, with its gorgeous QLED picture and upscaling capabilities. But as experts on all things AV, we’ve done the digging for more of the best 8K TVs on the market to help you decide.

Why you should buy it: You want more than just 8K resolution in your next big TV purchase. In fact, you’re looking for as many cutting-edge picture features as you can get.

Who it’s for: Dedicated TV watchers that care as much about future-proofing as they do an amazing picture.

Why we chose the Samsung QN900B:

Samsung has been a leader in QLED technology for many years now, with the company’s impressive Neo QLED displays taking home laurels for everything from brightness, colors, and contrast to picture upscaling. And while we think the Samsung QN90B is one of the best 4K QLEDs you can buy, we think the same when it comes to Samsung’s QN900B, an 8K TV that utilizes all the same core picture tech, with a few extra tweaks to accommodate the higher pixel count.

Behind the scenes, Samsung’s Quantum Matrix Technology Pro works in unison with the QN900B’s mini-LED lighting to create one of the fastest and most accurate local dimming systems we’ve seen on a TV to date. In execution, this means intense contrast and lifelike colors with minimal light blooming. That’s on top of Samsung’s Neural Quantum Processor 8K which does a fantastic job at upscaling 4K sources to near-8K standards, and a pretty decent job at polishing up 1080p sources, too.

HDR compatibility is another area where the QN900B gets to shine. If you think that amazing colors and contrast is a big win for regular SDR sources, just wait until you watch something in HDR10 or HDR10+. And with the QN900B’s four HDMI 2.1 inputs, all of which output 8K/120Hz, you can rest assured that whatever AV components you purchase over the next several years will all perform at their best.

Yes, the QN900B is one of the more expensive 8K TVs on the market, but if you’re looking for a premium picture matched by premium features, Samsung’s 8K champ is hard to pass up.

Why you should buy it: You’re a fan of Samsung’s QLED technology and want to spend a little less than one would on the flagship QN900B.

Who it’s for: Samsung devotees that are looking for an excellent 8K TV for a slightly more affordable price.

Why we chose the Samsung QN800B:

It can be a little frustrating when a TV brand releases two different models that are nearly identical when it comes to picture features and overall performance, and in the case of Samsung’s QN800B and QN900B, the similarities tend to outnumber the differences, but not entirely.

For starters, the QN800B is a lot less expensive than the QN900B — around $600 cheaper for the 65-inch model, with price drops on every available size (75- and 85-inch options are also available). The QN800B is also equipped with Samsung’s incredible mini-LED lighting and the Quantum Matrix Technology Pro for lightning-fast local dimming, a feature you’ll find on the QN900B.

In terms of what’s different, design-wise, the QN800B ditches the near-bezel-less Infinity Screen of the flagship QN900B, resulting in a slightly bigger frame and chassis all-around. The QN800B also uses the slightly weaker Quantum HDR 32X specification, compared to the QN900B’s Quantum HDR 48X for the 65-inch model, and 64X for both the 75- and 85-inch sizes. The QN800B also runs a slightly less powerful sound system than the QN900B (70 watts versus 90 watts), and cannot deliver the 4K/144Hz optimized gaming experience you’ll get with the QN900B.

These aren’t the biggest losses in the world, and fundamentally, the QN800B looks and feels like a top-dollar Samsung TV, complete with Tizen OS for all things streaming and voice assistant support for Alexa, Google Assistant, and Bixby.

The best 8K TV for the price

Who it’s for: Those who want all of the benefits of 8K resolution (and a lot of handy extras) at a (relatively) affordable price.

Why we chose the TCL 6-Series Mini-LED QLED 8K TV:

It will be a few more years before 8K TVs become as affordable as 4K TVs, but in the meantime, TCL’s 6-Series Mini-LED 8K QLED TVs are an amazing value. Available in 65- and 75-inch screen sizes, these Roku-powered TVs deliver everything we love about 8K resolution and then some.

It starts with the 8K panel —TCL’s very first 8K panel — which makes images tack-sharp and incredibly detailed. It’s bolstered by TCL’s upscaling technology which does an admirable job of converting 4K material to 8K resolution. Full HD (1080p) content isn’t quite as sharp, but that’s to be expected — it’s not easy to render an image with 16 times more resolution than it was shot at, without losing a little in the process.

But the big reason to invest in the TCL 6-Series is the LED backlighting. OLED TVs will remain the kings of contrast and black levels for some time to come, but mini-LED, with its thousands of tiny LEDs, is the next best thing. And in a brightly lit room, it even outperforms all but the most expensive OLED TVs.

The 6-Series Mini-LED 8K QLED TV isn’t just about picture quality. TCL has also equipped this model with a surprisingly good sound system, complete with a built-in subwoofer, stereo tweeters, and down-firing midrange drivers. It won’t outshine a really good soundbar or dedicated speaker system, but if you’re determined to stick with just a TV, the 6-Series will make you happy indeed.

This TV also scores on usability. When it comes to smart TV interfaces, it’s hard to beat the Roku OS for ease of use and simplicity. But in 2022, TCL went under the hood to make picture adjustments just as easy as finding something to stream. A smart settings algorithm pays attention to how you want one input or source to behave in terms of brightness, contrast, etc., and then automatically applies that to the TV’s other inputs and sources. You can tweak them individually, but having them closer to where you want them saves a lot of time and effort.

Speaking of inputs, it’s also worth noting that TCL has given the 6-Series two HDMI 2.1 inputs with 4K/120Hz, and that’s over and above the HDMI 2.1 you get on the dedicated HDMI eARC port.

The best 8K TV for the price

The best 8K TV for upscaling

Why you should buy it: Sony is a top brand when it comes to arresting picture quality, and the Z9J is another addition to the company’s portfolio of prolific TVs.

Who it’s for: Sony fans and anyone looking for one of the sharpest and most colorful 8K TVs on the market.

Why we chose the Sony XR Z9J:

Compared to Samsung and LG, Sony gets a little less attention in the TV marketplace, but the brand’s command of the limelight is certainly still on the strong side. And let’s be frank: it’s almost impossible to beat the level of color detail you’ll get with any flagship Sony TV, a feat that the company manages to top themselves on, yet again, with the amazing Z9J Master Series.

Available in 75- and 85-inch sizes, the Z9J uses Sony’s Cognitive Processor XR with XR Triluminos Pro to deliver jaw-dropping picture without even dipping our toes into 8K sources. The kind of upscaling you’ll get with the Z9J is simply next level, and Sony has definitely set the bar high for its competitors.

The Z9J is also equipped with four HDMI 2.1 inputs that deliver 8K/120Hz, and rocks a Google TV user interface, one of the best ways to experience all the comforts and thrills of your Netflix and Disney+ subscriptions. We also love the X-Wide Angle and Anti-Reflection technology, ensuring the Z9J looks incredible from any angle.

Sony recently released the 2022 Z9K, which introduces mini-LED lighting to the Master Series, but it’s $3,000 more than the Z9J, which is still an amazing 2021 TV you can get your hands on while supplies last.

The best 8K TV for upscaling

Why you should buy it: OLED is still the leader when it comes to picture quality, and this is the only 8K OLED TV you can buy, which pretty much makes it a no-brainer as long as you have deep pockets.

Who it’s for: Those who want the very best 8K TV on the planet and have the means to pay the sky-high price.

Why we chose the LG ZX OLED TV:

If you’ve been following our TV coverage over the past few years, you know we’re simply gaga about OLED. When it comes to picture quality, viewing angles, and black levels, it’s simply the best type of TV display you can buy, and LG’s ZX Series is the real TV of the future, locked behind a formidable paywall.

Because true 8K content is going to be hard to come by for the next year or two until the studio and streaming worlds catch up, an 8K TV must do an excellent job of upscaling 4K or Full HD content. Otherwise, you’re just wasting all of those pixels. The 2019 Z9 featured LG’s second-gen Alpha 9 8K upscaling, and when we did A/B comparisons between 4K and native 8K versions of the same content on our Z9 review TV, the visible differences were minimal. The ZX gets LG’s third-gen Alpha 9 8K upscaling, delivering even bigger and better upscaling.

Design-wise, the 88-inch version of the ZX series (which is also available as a 77-inch model) is also a stunner physically, with a polished aluminum stand that turns the TV into a sculpture worthy of a modern art display. The one downside: The stand and the display are integrated to the point where wall-mounting the panel portion separately is impossible.