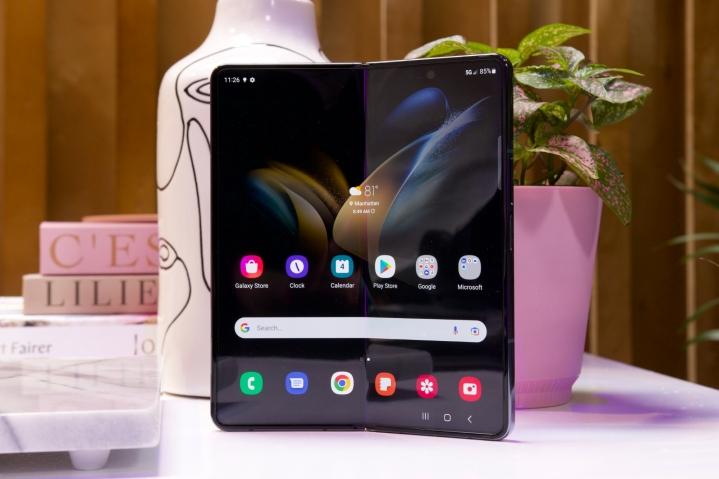 Novel LED panel technologies have reintroduced folding phones to the world of mobile tech, and it’s no surprise that Samsung — a tech giant that got its start making TVs — has been at the forefront of this revolution. It’s also no surprise that Samsung makes what is arguably the best folding phone money can buy, and for a limited time, you can score it at a discount: The excellent Samsung Galaxy Z Fold 4 is on sale right now for $400 off with no strings attached and no trade-in required.

Why you should buy the Samsung Galaxy Z Fold 4

When Samsung threw back the curtains on its first-gen Galaxy Z Fold in 2019, it broke new ground by introducing a new form factor to the market: the foldable smartphone. With its unique design, the Galaxy Z Fold gave techies a device that can function both as a smartphone and a compact tablet, and Samsung has continued to refine and perfect its design with each subsequent release. The new Samsung Galaxy Z Fold 4 is the latest iteration which was rolled out last August at the Galaxy Unpacked event.

The most obvious stand-out feature of the Galaxy Z Fold 4 is its 7.6-inch fold-out screen which is paired with a cover display that measures 6.2 inches. When the phone is folded, the front display serves as the main screen, allowing you to perform standard smartphone tasks such as making calls, sending texts, and checking notifications. When the phone is unfolded, the primary interior screen becomes accessible, giving you a large, tablet-like display for activities such as web browsing, streaming, video calls, and gaming.

The Galaxy Z Fold 4 also boasts impressive hardware specs on the inside. It’s powered by a Qualcomm Snapdragon 8+ Gen1 processor and 12GB of RAM, which is plenty of muscle for smooth browsing, mobile gaming, and cycling between apps. It comes standard with 256GB of storage with 512GB and 1TB upgrades available. The phone boasts a highly impressive camera module as well: It has a 50MP rear main camera along with a 12MP wide-angle camera and a 10MP telephoto camera. It’s capable of recording video at up to 8K. The framerate tops out at 24 fps at this resolution, but you can record 4K video at up to 60 fps. You get two front selfie cameras, too: one on the cover display and one on the main display.

The Samsung Galaxy Z Fold 4 is an innovative and unique device and is easily the most refined folding smartphone to come along in recent years. It’s also one of the best phone deals going right now, as Samsung has it on sale at the moment for $400 off. There’s no catch, meaning you don’t need to tie yourself to a carrier right away or trade in an old device to score this discount, which lets you get a Galaxy Z Fold 4 for as little as $1,400 for the 256GB model.