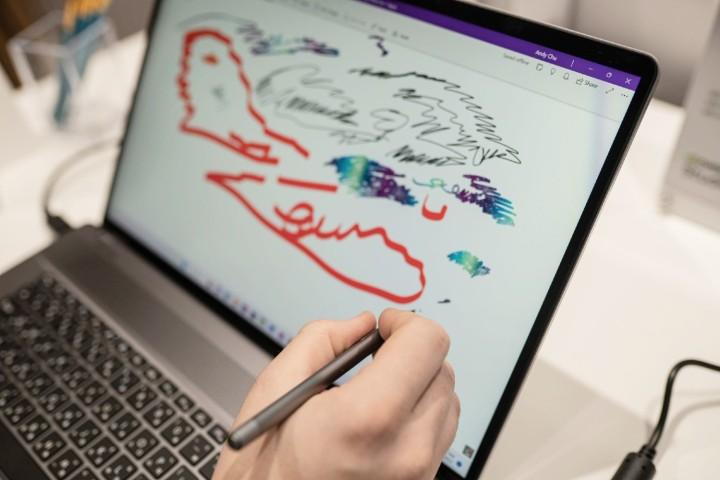 “You’re sure it won’t scratch?” That’s the question I asked MSI representatives when they told me their graphite-tip pencil wouldn’t leave a scratch on the display of its expensive new demo laptop.

It didn’t, and I can’t explain how. The new MSI Pen 2 stylus can somehow write on both paper and a screen without switching out or retracting of the graphite tip. Now, there’s a concept worthy of being one of the quirkiest and most interesting gadgets at CES 2023.

MSI had an ordinary notebook next to the laptop, and I scribbled some lines on it. Despite being a stylus, it left some clean, albeit thin lines. I’d have no problem using this as a normal pencil, and it only weighs 14.5 grams, so it’s not too bulky either.

But the true magic happened when I took that same pencil and pressed it up against the display. MSI had an illustration app open — and lo and behold, it functioned just as well as a stylus. I pushed it harder against the screen, and nope, not a single scratch. It felt like magic.

Drawing on the screen felt extremely smooth too. The MSI Pen 2 comes with tilt control, 4,096 levels of sensitivity, and even haptic feedback. As the tip glided along the surface, the feedback created the sensation of writing on texture. And it was pretty convincing, surprisingly enough.

MSI says the stylus has great battery life too, claiming it can be used for up to 10 hours with just five minutes of fast charging using the USB-C port on the side.

Pricing and availability hasn’t been announced yet, and details on how the pen will be bundled with other laptops is still not clear. All I know is I’m still wondering exactly how MSI pulled it off.