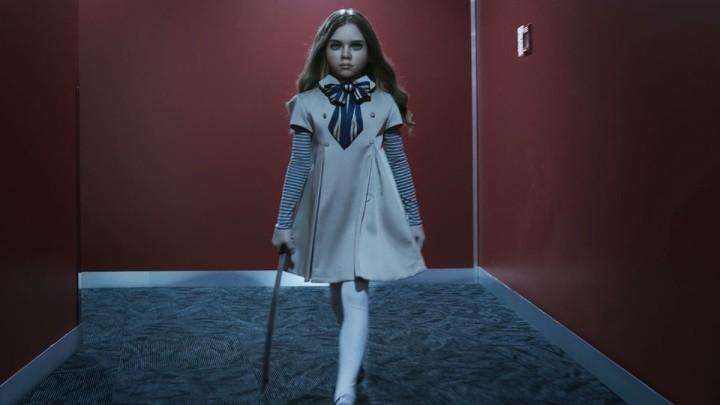 The new horror comedy M3GAN follows basically the same trajectory as every other movie about a deranged killer robot. In this case, the robot in question is M3GAN (Amie Donald), a lifelike doll created by Gemma (Allison Williams) to be the most advanced and accommodating toy in history.

What can go wrong? For anyone who’s seen or even heard of the Child’s Play movies, you know the answer: everything.

Gemma creates M3GAN partly out of her own ambition and partly so that she doesn’t have to take on as active of a role in raising her orphaned niece, Cady (Violet McGraw). Unsurprisingly, it isn’t long before M3GAN begins to take her purpose of protecting Cady so seriously that she’s killing any animals and people that pose any kind of threat to her human companion.

Once Gemma begins to suspect M3GAN, she safely manages to shut the doll down and take her back to her lab. Unfortunately, when M3GAN is thoughtlessly hooked back up to the lab’s diagnostic equipment by Gemma’s coworkers, she’s able to wake herself back up and free herself from her constraints.

Afterward, M3GAN goes on a brief killing spree by brutally murdering Gemma’s boss, David (Ronny Chieng), as well as his assistant, Kurt (Stephane Garneau-Monten), with the blade of a paper cutter.

M3GAN’s actions inevitably ruin David’s public launch of the M3GAN toy line, but they don’t prevent her from stealing a car and driving back to Gemma’s house in the middle of the night. When Gemma is alerted to her presence, a brutal fight breaks out between the two that momentarily ends when M3GAN threatens to cripple Gemma, which would put her in the permanent care of M3GAN. The doll’s threat is interrupted, however, by Cady, who finally realizes just how sadistic her “best friend” has become.

While it seems for a moment like Cady may actually side with M3GAN, a heart-to-heart conversation with Gemma had actually rehabilitated her trust in her aunt earlier in the night. As a result, Cady remote controls Bruce, a powerful, non-sentient robot that Gemma built in college, to turn the tide of her and her aunt’s fight with M3GAN. After several moments of intense back-and-forth, Gemma finally manages to put M3GAN’s reign of terror to an end by driving a screwdriver through her exposed head.

Moments later, Gemma and Cady walk out of their house and are welcomed by the former’s surviving coworkers, as well as a whole squad of policemen. However, the film’s seemingly happy ending takes a brief turn for the worse after Gemma and Cady walk out of frame only for director Gerard Johnstone’s camera to linger on the image of Gemma’s empty home. Just before the film cuts to black, Gemma’s custom-built, Alexa-esque smart home device, which controls her entire house, suddenly turns on all on its own.

M3GAN’s final image makes it clear that the film’s eponymous doll hasn’t totally been killed. Johnstone and screenwriter Akela Cooper heavily imply that M3GAN was able to survive her physical body’s destruction by hacking into the very internet network that powers her creator’s home. The film, in other words, ends by setting up a potential sequel for itself, one in which M3GAN finds new power via the internet.

Whether or not said sequel is ever actually made will, of course, depend entirely on how well M3GAN does at the box office. If the new film does succeed, though, then Johnstone, Cooper, and producer James Wan have already opened the door for M3GAN’s return.

M3GAN is now playing in theaters.